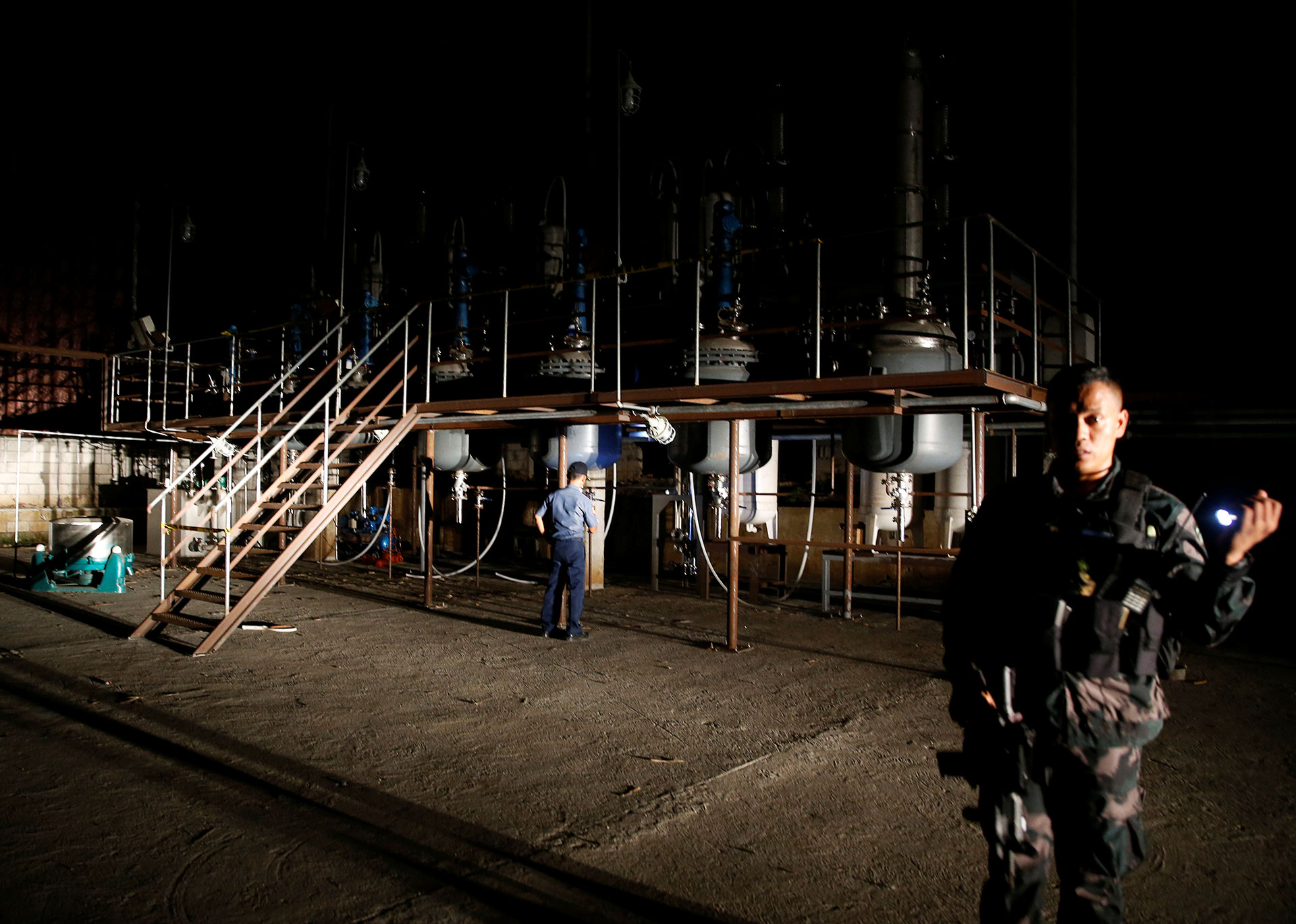 Since coming to power nearly six months ago, Philippines President Rodrigo Duterte has launched a ruthless war on drugs that has left thousands dead, with hundreds killed in police operations alone. Despite his tough crackdown on drugs domestically, Duterte has done little to stem the flow of narcotics from China to the Philippines as he seeks to cozy up to Beijing at the expense of damaging ties with the United States. China is currently the top exporter of methamphetamine and its precursors to the Philippines, hindering efforts by Duterte to get meth off the streets. At Reuters, John Chalmers looks at the central role that China plays in the Philippine meth trade and the complex system of trafficking that has allowed Chinese suppliers to operate in that country:

Known in the trade as “cooks” and “chemists,” meth production experts are flown into the Philippines from Greater China by drug syndicates to work at labs like the one at Mount Arayat. China isn’t only a source of meth expertise – it is also the biggest source of the meth and of the precursor chemicals used to produce the synthetic drug that are being smuggled into the Philippines, according to local drug enforcement officials.

“It’s safe to say that the majority of the meth we have comes from China,” said PDEA spokesman Derrick Carreon.

[…] The trade is controlled by small, tight-knit groups of Chinese who oversee the entire process, the officials say: from the procurement of precursors in China to the production of the drug in the Philippines to its distribution by local gangs. Philippines police say many of those running the meth trade are Triads, the ruthless criminal syndicates that have long been involved in drug trafficking.

[…] Meth smuggled in from China is typically passed from large ships to smaller vessels, mainly off the coast of the northern Philippines island of Luzon, officials say. Packages are sometimes dropped into the sea off the Philippines’ long and poorly patrolled coastlines, and picked up by fishermen. The meth then passes into the hands of local drug traffickers.[Source]

Despite skepticism from some Philippine drug officials, China has recently expressed willingness to proactively cooperate with the Philippines on its war against illegal drugs, including the provision of joint technical expertise among other enforcement measures. Rose-An Jessica Dioquino at GMA News reports:

According to a report from Reuters, Geng Shuang, spokesperson of China’s Foreign Ministry, said his country “stands ready” to make ties with the Philippines stronger in some areas, including the anti-drug campaign.

“China supports President Duterte’s campaign in the Philippines against drug crimes according to its law,” he said.

Shuang issued the remark when asked in a news briefing about the latest arms deal between the two countries.

[…] During the said visit, the two countries signed an agreement for a P714.57-million grant, which China gave for the implementation of “projects for anti-illegal drugs and law enforcement security cooperation.” [Source]

On the U.S. end, Washington is withholding a major aid package to the Philippines as President Duterte’s crackdown on drugs causes deep concerns about human rights violations in light of the extensive extrajudicial killings that have taken place.

The United States has not renewed a major aid package to the Philippines because of “significant concerns” about the rule of law under President Rodrigo Duterte, the US embassy said on Thursday.

“This decision reflects the Board’s significant concerns around rule of law and civil liberties in the Philippines,” embassy spokeswoman Molly Koscina said in a statement after the country was not selected for a new Millennium Challenge Corporation grant.

The previous five-year grant, which was worth US$433.9 million, expired in May this year.

The US government set up the Millennium Challenge Corporation to promote economic growth and reduce poverty around the world. However countries can only qualify if they “demonstrate a commitment to just and democratic governance, investments in its people, and economic freedom”, according to the corporation’s website.

[…] “MCC will continue to monitor unfolding events in the Philippines and underscores that all country partners are expected to maintain eligibility, which includes not just a passing scorecard but also a demonstrated commitment to the rule of law, due process and respect for human rights,” she said. [Source]

Elsewhere, a new and lethal synthetic drug produced in China that goes by the name “Pink” is finding its way into the United States, causing deadly overdoses and prompting the DEA to add it to the same category of illegal drugs as heroin and cocaine. Meanwhile, a Chinese chemistry professor and several other accomplices have been charged for producing and exporting illegal drugs to the U.S. and Europe. The convicts claimed that they were working on chemical research and development.