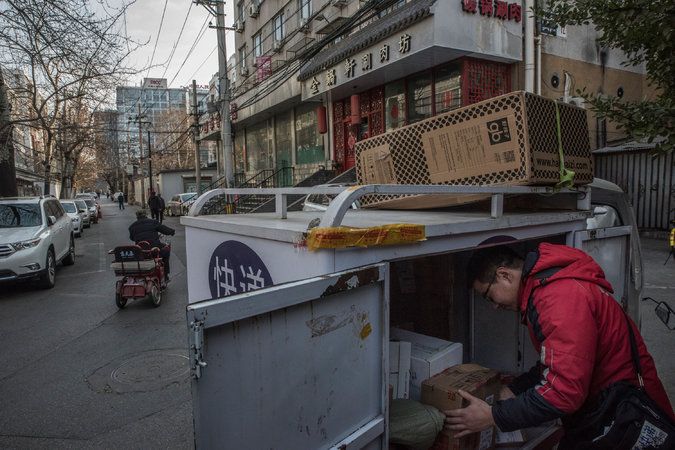 The Chinese e-commerce industry has been built on the backs of couriers — called kuaidi, or express delivery, in China — like Mr. Zhang. They number 1.2 million, by one survey, and online retailers like Alibaba use them to zip packages to customers by scooter or three-wheeled electric cart. Across China, the world’s largest market for package delivery, a courier shouting “kuaidi!” through a door or a phone signals your package has arrived.

But for the couriers — who are largely unskilled workers from China’s interior — the work can be low-paying and difficult. It is coming under scrutiny from labor activists and legal experts who say many couriers face punishing hours and harsh working conditions.

Nearly one-quarter of them work more than 12 hours a day, seven days a week, according to the survey, which covered 40,000 couriers and was conducted by Beijing Jiaotong University and Alibaba’s research and logistics arms. A majority work more than eight hours a day each day of the week.

Labor standards in the industry vary widely, but many couriers work under arrangements that might, for example, provide no overtime pay or no employer contributions to their government health care and pension benefits. Just as in the United States, where Uber drivers and many others work as contractors, those arrangements raise questions about what defines work and employment. [Source]

The lack of strict industry regulation means that many workers in the parcel delivery sector are unable to obtain basic employment protections, which has left many vulnerable to work-related accidents and scandals. Sarah Talaat, Ye Yuan, and Liang Lianfen at Sixth Tone report:

“Many workers are unaware of the background of their company, and they don’t know who their legal employer is,” Dong said, explaining that food-delivery employees are often contract laborers supplied by so-called labor service companies. Some such companies fail to purchase insurance, exposing deliverymen to risks, he said.

“Whenever we try to persuade the workers to request a contract, they reply that it sounds good, but they say, ‘If we do this, no company will hire us,’” Dong said. Since many workers fail to see beyond their immediate situations, they don’t grasp the importance of having a contract in case of future problems, he added.

[…] According to a report by state newspaper The Beijing News released in December 2016, the risk of road accidents ranks as the most dangerous part of being a courier. A food-delivery worker interviewed for the article recalled at least four deaths of fellow delivery employees on the road that year.

[…] In a separate incident, an anonymous netizen posted a video of a food-delivery worker who was behind schedule on a delivery crying in an elevator. The video was reposted in January by numerous media outlets, including the People’s Daily and state broadcaster CCTV, and it prompted outrage among netizens concerned that workers are fined too harshly for delivery delays. [Source]

Tough conditions have led to increased worker unrest in China’s growing service sector. Hudson Lockett at Financial Times reports that labor disputes in the new economy have for the first time surpassed incidents in the manufacturing industry, with arrears cases being the primary driver of conflict.

Chinese labour unrest extended its footprint last year as workforce tensions that have long beset the manufacturing and construction industries began to hit the fast-growing sectors on which Beijing has pinned its hopes for future growth.

[…] “The new economy is rife with the old labour problems of the past,” said Keegan Elmer, a researcher at the Hong Kong-based workers’ rights organisation.

[…] Incidents of industrial action doubled for retail workers, grew by a quarter in transport and a fifth in the services sector. For the first time their combined total exceeded manufacturing incidents, which fell by almost a third. In construction, still responsible for the largest share, incidents rose only 8 per cent.

[…] Official statistics that see the light of day do suggest deeper problems. In Zhejiang — a prosperous coastal province home to the headquarters of Alibaba — there were more than 1,700 incidents over arrears from January to October last year, according to comments from an official with China’s Ministry of Health and Human Resources.

The official told Communist party mouthpiece the People’s Daily in January that heavy industries remained “disaster areas” for wage arrears, adding that new conflicts were becoming more visible as the number of arrears cases in “internet plus” industries was “clambering higher at high speed”. [Source]

On Twitter, China Labour Bulletin’s Keegan Elmer shared an article originally published on a government website that highlighted the magnitude of the salary arrears issue.

Li Keqiang to worker: how much do you make/year? Worker: actually, I am still owed 50,000 yuan in arrears. Awkward https://t.co/02v1x8FroG pic.twitter.com/ccHRbUECon

Attendees of the meeting said that addressing the issue of wage arrears for migrant workers was an important step to increase their income and strengthen social justice, embodying the people-centered development concept.

The State Council will carry out special campaigns and inspection tours to crack down on such offenses, while making some cases public.

Provincial, municipal and county-level officials will be held accountable for wage arrears for migrant workers within their jurisdictions, according to the meeting.

Human resources and social security departments must maintain clear and open channels for people to report crimes, and a blacklist system should be created to punish enterprises which are in arrears with migrant workers’ salaries. [Source]