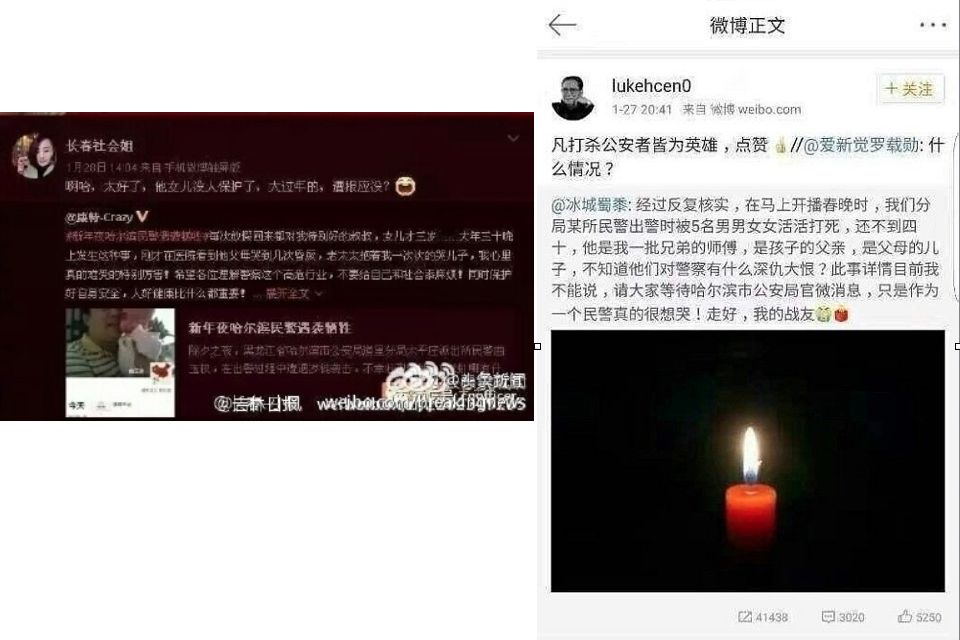 At least two Weibo users have been detained after writing disparaging comments about a police officer who was killed in Harbin while responding to a bar fight. Kinling Lo at the South China Morning Post reports on the incident:

According to a screen grab published in Guangzhou’s Xinxi Daily on January 27, the Weibo blogger lukehcen0 shared news that police officer Qu Yuquan had been fatally assaulted by five people at a karaoke bar in Harbin, capital of Heilongjiang province.

In the caption beneath the news, lukehcen0 wrote : “Anyone who kills or beats up a cop is a hero. Thumbs up!” [Source]

Qu Yuquan, a 38-year-old police officer in Harbin, was attacked after being called to a brawl at a KTV bar on Friday night, according to a post on the Harbin police’s Weibo account. Qu died from his injuries after being taken to hospital.

After Harbin police posted the news on Weibo, a user with the handle lukehcen0 posted a message “insulting the sacrificed police officer and inciting violent assault of police,” according to the Legal Evening News, a newspaper under a Communist Party media organisation.

“His actions have violated the country’s Public Security Administration Punishments Law,” it said. He was taken in for questioning on Saturday as part of a coordinated effort between police in Beijing and Guangzhou under the direction of the Ministry of Public Security, the paper said. [Source]

Another internet user who posted messages about Qu’s death under the user name Changchun Social Sister has also been detained, according to the HKFP report. As Radio Free Asia reports, these detentions come as at least six people have been detained for insulting police online:

In total, six people have been arrested in recent weeks for “insulting a police officer,” according to a social media post from police in the eastern province of Shandong.

They included a steel mill manager surnamed Zhao from the central province of Henan, detained for “slandering the [ruling Chinese Communist] Party and the People’s Police,” and a resident of Tieling in the northeastern province of Liaoning who is accused of hurling “abuse” at dead traffic policeman Luo Zhenbo via his account on the WeChat smartphone app.

“Another dog dies, great! That’s one less of them,” the man, identified only by his surname Zhang, allegedly commented on the local traffic police WeChat channel.

Zhang was handed a 10-day administrative sentence for “picking quarrels and stirring up trouble” for the comment, the post said. [Source]