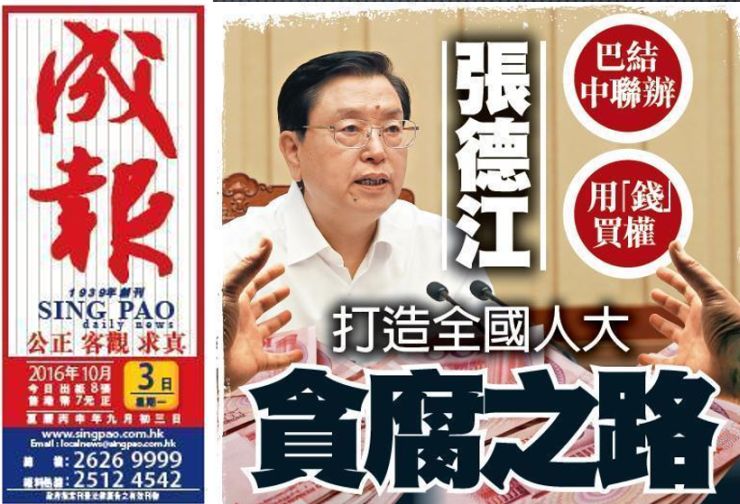 Hong Kong-based Sing Pao Daily News has reported that members of its staff have been threatened and that its computer systems were attacked. Hong Kong police are investigating the incidents. Sing Pao is a pro-Beijing newspaper that over the past year has published a series of anonymous columns that are very critical of Chief Executive C.Y. Leung and the Liaison Office of the Central People’s Government, Beijing’s main representative office in Hong Kong. Elson Tong at Hong Kong Free Press reports on the recent harassment of the paper’s staff:

The newspaper also claimed that “a large number of suspicious individuals who look like mainlanders” have been loitering outside its offices, as well as following and photographing its managers since mid-February.

On Wednesday, Sing Pao published testimonies from several of its reporters, who claimed to have spotted men observing them outside restaurants in which they were dining and pretending to use their mobile phones, all whilst avoiding nearby police officers.

“When [the managers] attempted to approach the other party… the man quickly left in haste,” the newspaper wrote. [Source]

The South China Morning Post reports that the harassment includes posters with photos of newspaper staff taken from their travel permits, which should only be accessible to official agencies like China Travel Service and the Ministry of Public Security:

Among those shadowed was chief editor Lau Mei-yee, the Post has learned. A police source said Lau had filed a report on Sunday about threats to her personal safety and she had also called on behalf of the newspaper.

A picture of at least one staff member had appeared in a “threatening” bill posted near an employee’s home and the newspaper believed the photo was cropped from their home return permit, the travel document that enables Hong Kong residents to travel to mainland China.

[…] It is understood that Hong Kong police have stepped up their investigations after receiving reports from the newspaper management two times in the past few days.

A police source said Lau had provided new information on Tuesday when she said leaflets containing her photo and smearing her were found near her home. [Source]

The Committee to Protect Journalists issued a statement condemning the harassment:

The company statement said it believes the harassment is connected to a series of Sing Pao columns criticizing outgoing chief executive Leung Chun-ying, Hong Kong’s top leader, and the Chinese government’s Liaison Office, Beijing’s top representative body in Hong Kong, in the run up to the chief executive election on March 26.

“Journalists in Hong Kong should be able to do their jobs without fear of reprisal, particularly in these crucial days leading up to the chief executive election,” said Robert Mahoney, CPJ’s deputy executive director. “We call on Hong Kong authorities to thoroughly investigate this incident and prosecute those responsible for the cyberattacks against Sing Pao and the harassment of its staff.” [Source]

Sing Pao’s chairman is currently being investigated by police in mainland China for “illegal business transactions,” accusations which he says are politically motivated. Danny Mok of the South China Morning Post reports that official media in China republished months-old news of his investigation in August, just after the newspaper published a hard-hitting column critical of Leung:

The report by Xinhua said Gu Zhuoheng, 44, chairman of pro-establishment Sing Pao Media Enterprises since October 2014, was wanted by Shenzhen police for an alleged connection to a case of illegally receiving some 150 million yuan (HK$173 million) from financial platform cnmeidai.com, based in Shenzhen.

Gu denied similar reports, published previously, in a statement in August, saying he had no relationship with the platform, which claimed to be China’s first online medium of its kind providing services from peer-to-peer lending to financing for small and medium-sized enterprises.

Gu also stressed that he had been free to travel between Hong Kong and the mainland.

He earlier claimed he had been under revenge-driven political attack since last year because he would not submit to a “certain power”. He has not identified the power. [Source]

Beijing Cracks Down on Internet News