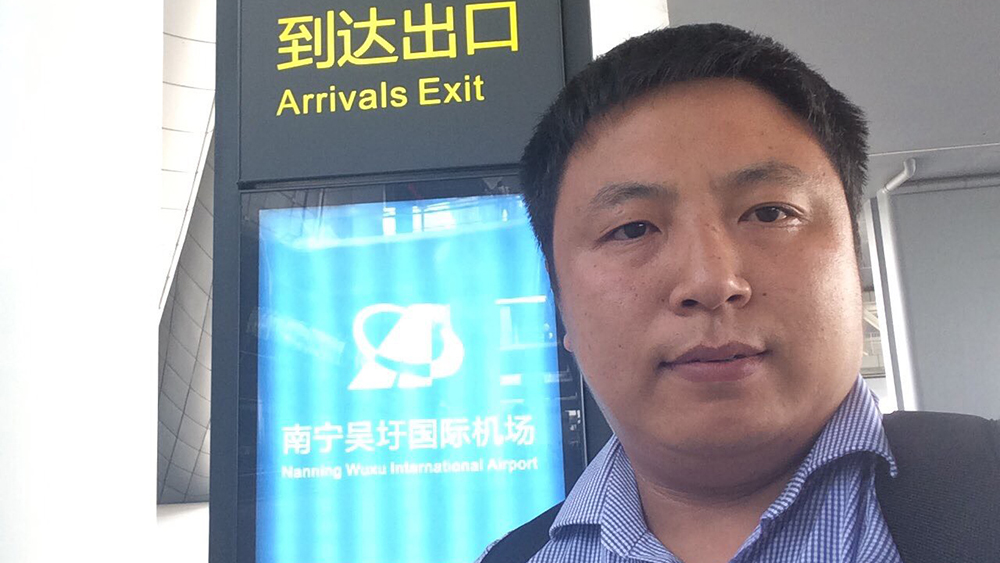 According to reports, rights lawyer Chen Jiangang (陈建刚) was detained by state security agents this week while on vacation with family and friends in Yunnan. Chen had helped his former client Xie Yang (谢阳) expose accounts of torture inflicted on him while under detention amid the 2015 “Black Friday” or “709″ crackdown—claims that were dismissed as “fake news” in Chinese state media. Xie was expected to stand trial last week, but it was indefinitely postponed without notice. At Radio Free Asia, Xin Lin reports on Chen’s detention and police escort back to Beijing:

Chen went ‘missing’ with his wife Zou Shaomei and the couple’s two sons during a family trip to the southwestern province of Yunnan after making a video saying he was concerned that he might be detained.

An officer who answered the phone at the municipal state security police bureau in Yunnan’s Jinghong city appeared to confirm the agency’s involvement.

[…] Chen and his family were detained on Wednesday afternoon, activists close to Chen said via social media.

His family was released Thursday morning and permitted to take a flight back to Beijing, but Chen was forced drive the 3,200-kilometer (2,000-mile) journey home with three police escorts, Agence France-Presse reported.

Sources said Zou and the children remain under police surveillance at their home, while Chen’s current whereabouts are unknown.

A fellow rights lawyer who asked to remain anonymous said Chen may have been hoping to help his family flee China by crossing the border into northern Myanmar from Yunnan. [Source]

At the Hong Kong Free Press, Catherine Lai reports that over 100 Chinese lawyers have signed a statement calling for the release of Chen:

“We are acutely aware that lawyer Chen Jiangang has riled the authorities by revealing the torture of his client, the Hunan-based lawyer Xie Yang, and we hope that his detention in Yunnan is not intentional retaliation against lawyer Chen Jiangang by the relevant organs,” the statement said.

The group called on the authorities to immediately release Chen and others travelling with him, based on the international standard that lawyers should not be punished for practicing their profession, and based on Chinese citizens’ right to travel freely within the country.

A photo of a handwritten note sent out by Chen said that police did not present any legal warrants or IDs, and that his family’s belongings were confiscated.

“I will not forget the grievances suffered by my wife and two sons in the police station,” Chen said in his WeChat post. [Source]

The United Nations human rights office on Friday denounced China’s “ongoing crackdown” and detention of lawyers and activists and called on authorities to release all those being held for exercising what it called fundamental freedoms.

It voiced concern at reports that defense lawyer Chen Jiangang and his family were taken by police on Wednesday while traveling in the southwest province of Yunnan. His whereabouts are unknown, though his wife and two children were released.

[…] “Prior to being reportedly taken by police last Wednesday, Chen had, in a video message, expressed concerns that he too may ‘lose his freedom’ and that he may be coerced into self-incrimination,” Shamdasani told a news briefing.

“We are dismayed by this continuing pattern of harassment of lawyers, through continued detention, without full due process guarantees and with alleged exposure to ill-treatment and coercion into self-incrimination,” she said.

Read more about China’s ongoing crackdown on rights advocacy, or the 2015 Black Friday roundup and trials of those lawyers and activists detained, via CDT.