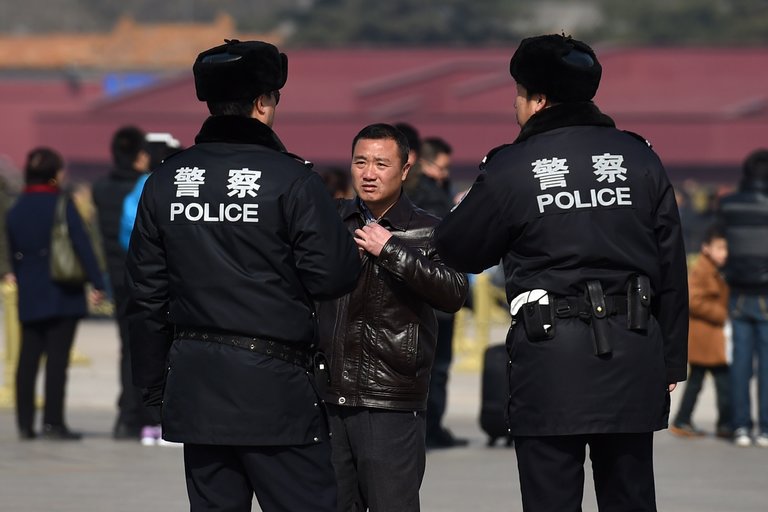 A recently released draft law raised concerns over vague wording with potential to substantially increase the powers of Chinese intelligence agencies to conduct surveillance both at home and abroad. At Reuters, Christian Shepherd relays fears from legal scholars and Chinese activists—many of whom are already closely monitored in the vicinity of their homes:

Hu Jia, a well-known dissident, said the release was met with fear and despair in his circle of reform-minded activists, where it was seen as a sign of strengthening resolve in the ruling Communist Party to crush dissent.

[…] “The law is also partly to frighten people ahead of the 19th Party Congress; to tell them to be careful, to be quiet,” he added. Hu was referring to the once in five years congress of the Communist Party likely to be held in October or November in which President Xi Jinping is likely to further cement his hold on power by appointing allies into the party’s inner core.

[…] “The (intelligence law) draft, like the National Security Law (passed in 2014), seems set to give the veneer of legality to intrusive and repressive surveillance activities,” said Eva Pils, an expert on Chinese criminal law at King’s College London.

[…] Wang Qiaoling, the wife of prominent rights lawyer Li Heping who was handed a three year suspended sentence in April for subversion, told Reuters she has been constantly monitored since Li was detained two years ago. […] [Source]

The Hong Kong Free Press further highlights authorities’ invasive surveillance measures currently, prior to the passing of the new intelligence law. Catherine Lai reports on police surveillance of the family of Wang Quanzhang, one of dozens of lawyers detained in the 2015 “Black Friday” crackdown, as they gathered in Beijing to file a lawsuit on Wang’s behalf:

Wang’s wife Li Wenzu went to the Procuratorate on Friday morning along with his elderly parents and his sister, who travelled to Beijing from their hometown in Shandong.

Knowing there was a high probability that their suit would not be accepted, the family filed it as a symbolic gesture, hoping to pressure authorities to provide information on Wang’s situation.

[…] Li told HKFP that there were about ten police cars waiting outside Wang’s residence – where she is staying with her son – in Beijing on Friday morning, along with uniformed and plainclothes police.

The police cars followed them from there to the procuratorate. Along the way, police and “secret police” in plainclothes started filming the group.

HKFP also noted that Wang’s family members were joined in Beijing by those of other detained activists, including Wu Gan’s father Xu Xiaoshun. Xu recently praised and encouraged a loose alliance of family members and supporters of those detained in the recent crackdown on legal advocacy; CDT covered this development in a post which also quoted  legal scholar Jerome Cohen on the “stifling” restrictions—including surveillance—faced by those advocating for the detained.

Chinese Human Rights Defenders explains how the draft law signals the next phase of the Xi administration’s ongoing crackdown on civil society, situates it into a succession of recent security legislation with similar implications, and outlines the organization’s specific concerns with the draft law:

Provisions in China’s new draft intelligence law, if adopted in their current form, would authorize pervasive surveillance on NGOs and intrusion on privacy. The draft law requires all Chinese citizens to collaborate with national intelligence collection; authorizes Chinese intelligence agents overseas to use “the necessary means” in their work; and requires intelligence agencies to collect and process information on foreign groups and individuals operating in China that allegedly fund, incite or implement acts that “endanger national security,” or domestic groups or individuals “colluding” with foreigners inside China. The draft intelligence law clearly aims at further tightening control over civil society organizations, both domestic and international, which are already under assault as “hostile forces” that threaten “national security.”

[…] Though the draft law contains language about “respecting and protecting human rights” in national intelligence work (Article 7), it is replete with provisions authorizing the expansion of the power of state intelligence agencies to conduct surveillance of NGOs. It joins the phalanx of recently adopted Chinese laws that tighten the government’s grip on civil society, including the Counter-Espionage Law (2014), National Security Law (2015), Counter-Terrorism Law (2015), Overseas NGO Law (2016), and Cyber-Security Law (2016). In releasing the draft law, the NPC explicitly stated that authorities should work to properly coordinate these laws.

CHRD has serious concerns over the following draft provisions: […] [Source]

In 2015, The New York Times’ Edward Wong described the then national security, counterterrorism, and foreign NGO laws as part of a trend of legislation aimed at increasing “ideological security.”