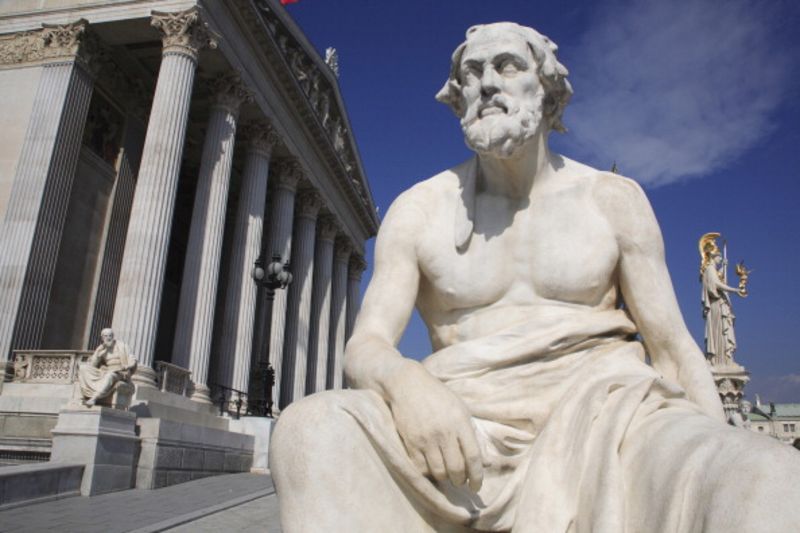 In his book “Destined for War: Can American and China Escape the Thucydides’s Trap,” released earlier this year, Harvard Kennedy School professor and political scientist Graham Allison coined a term to describe war deriving from the fear that an established power holds in the face of a rival’s rise. The “Thucydides Trap” derives its name from the fifth century BC Athenian historian known for his “History of the Peloponnesian War,” which, according to Allison’s reading, recounted the bloody Greek war between Athens and Sparta as having resulted from a well-armed city-state’s fear of a rival’s ascent. An overview from the Kennedy School’s Belfer Center briefly describes Allison’s book and its central argument:

Today, an irresistible rising China is on course to collide with an immovable America. The likely result of this competition was identified by the great historian Thucydides, who wrote: “It was the rise of Athens and the fear that this instilled in Sparta that made war inevitable.”

But the point of Destined for War is not to predict the future but to prevent it. Escaping Thucydides’s Trap is not just a theoretical possibility. In four of the 16 cases, including three from the 20th century, imaginative statecraft averted war.

Can Washington and Beijing steer their ships of state through today’s treacherous shoals? Only if they learn and apply the lessons of history. [Source]

In an essay for Foreign Policy earlier this month, Allison zeroed in on five lessons learned from most recent of the four cases when, according to his theory, the trap was avoided—the Cold War:

Lesson 2: Leaders must be prepared to risk a war they cannot win.

Although neither nation can win a nuclear war, both, paradoxically, must demonstrate a willingness to risk losing one to compete. […]

Washington must think the unthinkable to credibly deter potential adversaries such as China.

Lesson 3: Define the new “precarious rules of the status quo.” […]

At Politico this week, Michael Crowley noted that Allison isn’t alone in drawing a valuable early lesson in political realism from Thucydides. Instrumental advisors in Trump’s White House have long been fascinated with the Athenian historian:

[…] Thucydides is especially beloved by the two most influential figures on Trump’s foreign policy team. National security adviser H.R. McMaster has called Thucydides’ work an “essential” military text, taught it to students and quoted from it in speeches and op-eds. Defense Secretary James Mattis is also fluent in Thucydides’ work: “If you say to him, ‘OK, how about the Melian Dialogue?’ he could tell you exactly what it is,” Allison says—referring to one particularly famous passage. When former Defense Secretary William Cohen introduced him at his confirmation hearing, Cohen said Mattis was likely the only person present “who can hear the words ‘Thucydides Trap’ and not have to go to Wikipedia to find out what it means.”

That’s not true in the Trump White House, where another Peloponnesian War aficionado can be found in the office of chief strategist Steve Bannon. A history buff fascinated with grand conflict, Bannon once even used “Sparta”—one of the most militarized societies history has known—as a computer password. (“He talked a lot about Sparta,” his former Hollywood writing partner, Julia Jones, toldThe Daily Beast. An unnamed former colleague recalled for the New Yorker Bannon’s “long diatribes” about the Peloponnesian War.)

[…] As for President Donald Trump himself, there’s no evidence he’s taken any interest in an Athenian historian born almost 500 years before Jesus Christ. […]

But Trump might approve of the ancient Greek scholar’s sway over his senior strategists. Thucydides is considered a father of the “realist” school of international relations, which holds that nations act out of pragmatic self-interest with little regard for ideology, values or morality. “He was the founder of realpolitik,” Allison says. […] “In the real world, the strong do what they will and the weak suffer what they must,” concludes an Athenian ambassador—a Trumpian statement 2½ millennia before The Donald’s time. […] [Source]

However, Stanford professor and former Obama aide on national security and Ambassador to Russia Michael McFaul advises the White House to move their focus from ancient Greek war back to the present day:

Instead of pondering Thucydides, how about discussing & hiring an Assistant Secretary for the region. Its the end of June. https://t.co/LITT7RTMpQ

The New York Times’ Judith Shapiro offered a positive review of Allison’s book last week, in a dual review of it and Howard French’s similarly historically informed “Everything Under the Heavens: How the Past Helps Shape China’s Push for Global Power“:

Allison, the director of Harvard Kennedy School’s Belfer Center for Science and International Affairs, resurrects the Samuel Huntington thesis of a coming clash of civilizations to explain that China thinks in longer time frames and with a greater sense of hierarchy than the United States. In order to avoid the Thucydides trap, he writes, American policy makers must reject the tendency to think that China is like us and that it will respond as we would to identical provocations. Numerous situations could spark military conflict between the United States and China despite efforts on both sides to maintain peace, from accidental collisions at sea to misunderstandings caused by cyberattacks to actions taken by third parties like North Korea or Taiwan. “Will it be more difficult for the Chinese to rationalize a cosmology in which there are two ‘suns,’ or for the U.S. to accept that it must live with another, and possibly superior superpower?” Allison asks in a discussion of the need for both sides to bring their brightest minds to the challenge ahead.

Both of these fine books show that China intends to evict the United States from Asia in order to restore its dominance over what it considers its historic spheres of influence. Unfortunately, Washington is poorly prepared to deal with a China that strategizes in terms of the symbolic undercurrents and sensitivities illuminated so dramatically by both French and Allison. Whether the resurgence of China will mean tragedy in the form of armed conflict will depend on how China, China’s neighbors and the United States understand and manage the deeper motivations and structural forces in play. [Source]

Bloomberg’s Albert R. Hunt also appears sympathetic to the essential current relevance of Allison’s book,  imploring readers to have a look at Allison’s book with the warning: “it’s going to scare the hell out of you.” Not all reviewers appear as convinced, however. Many of Allison’s fellow academics have taken issue with his thesis. At The Wall Street Journal, Andrew Browne overviews Allison’s argument—highlighting its special relevance in a time when Donald Trump and Xi Jinping are at the helms of their respective nations, and offering a counter opinion from Sinologist Arthur Waldron:

[…] It is “frighteningly easy to develop scenarios in which American and Chinese soldiers are killing each other,” [Graham Allison] writes.

Nonsense, responds the noted Sinologist Arthur Waldron, a history professor at the University of Pennsylvania. War is by no means ordained.

In a caustic review of Mr. Allison’s book, he declares that the Thucydides Trap is a fallacy. Dig deeper into Thucydides’s text, he argues, and it becomes clear that Sparta, though warlike, tried to head off confrontation with Athens, at one point suggesting a simple compromise.

There’s much more here than an academic dispute over classical history.

Fundamentally, the two professors disagree in their estimates of China’s rise, and thus the severity of the challenge it represents to the U.S.-led order that has kept the peace since World War II. […] [Source]

Historian and writer Ian Buruma calls “Destined for War” the “worst of the bunch” of a wave of recently published books and articles that he sees as capitalizing on anxiety over China’s rise. From The New Yorker:

The worst of the bunch, Graham Allison’s “Destined for War” (Houghton Mifflin Harcourt), may also be the most influential, given that its thesis rests on a catchphrase Allison has popularized, “Thucydides’s Trap.” Even China’s President, Xi Jinping, is fond of quoting it. “On the current trajectory,” Allison contends, “war between the U.S. and China in the decades ahead is not just possible, but much more likely than currently recognized.” The reason, he says, can be traced to the problem described in the fifth century B.C.E. in Thucydides’ account of the Peloponnesian War. Sparta, as the established power, felt threatened by the rising might of Athens. In such conditions, Allison writes, “not just extraordinary, unexpected events, but even ordinary flashpoints of foreign affairs, can trigger large-scale conflict.”

[…] Allison underrates the many problems that could slow things down quite soon: China’s population is aging so rapidly that an ever smaller pool of young people will have to support a growing number of old people, who lack proper welfare provisions; the country is an ecological disaster zone; the dead hand of Communist Party control makes necessary economic reforms difficult; innovative thinking is hampered by censorship; and so on. In terms of military hardware—aircraft carriers and the like—China still lags well behind the United States. And the United States has a wide network of allies in Asia, while China has almost none. Still, China plainly aspires to be the dominant power in East and Southeast Asia, and this is making the United States and its allies increasingly nervous. Southeast Asians are spooked by Chinese claims of sovereignty over the South China Sea, bolstered by the construction of artificial islands with landing grounds. Japan, although it has a substantial military force, is saddled with a pacifist constitution. South Korea doesn’t quite know whether to resist Chinese domination or cozy up to it. The British historian Michael Howard’s remark about nineteenth-century France, quoted in Allison’s book, could easily apply to the United States today. The “most dangerous of all moods,” Howard said, is “that of a great power which sees itself declining to the second rank.” [Source]

And at SupChina, University of Pennsylvania historian and international relations professor Arthur Waldron earlier this month took issue with Allison’s entire interpretation of Thucydides, offering his own citations:

Let us start by observing that perhaps the two greatest classicists of the last century, Professor Donald Kagan of Yale and the late Professor Ernst Badian of Harvard, long ago proved that no such thing exists as the “Thucydides Trap,” certainly not in the actual Greek text of the great History of the Peloponnesian War, perhaps the greatest single work of history ever.

Astonishingly, even the names of these two towering academic giants are absent from the index of this baffling academic farrago. It was penned by Graham Allison, a Harvard professor — associated with the Kennedy School of Government — to whom questions along the lines of “How did you write about The Iliad without mentioning Homer?” should be addressed.

Allison’s argument draws on one sentence of Thucydides’s text: “What made war inevitable was the growth of Athenian Power and the fear which this caused in Sparta.” This lapidary summing up of an entire argument is justly celebrated. It introduced to historiography the idea that wars may have “deep causes,” that resident powers are tragically fated to attack rising powers. It is brilliant and important, no question, but is it correct?

Clearly not for the Peloponnesian War. Generations of scholars have chewed over Thucydides’s text. Every battlefield has been measured. The quantity of academic literature on the topic is overwhelming, dating as far back as 1629 when Thomas Hobbes produced the first English translation.

In the present day, Kagan wrote four volumes in which he modestly but decisively overturned the idea of the Thucydides Trap. Badian did the same. […] [Source]