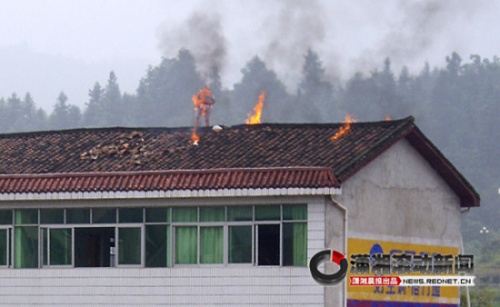 One such incident occurred in Yihuang County in Jiangxi in 2010. To protest the forced demolition of their home, Ye Zhongcheng and two members of his family ignited themselves with gasoline.

The official’s statement, which harkens back to a Communist Party propaganda song, set off a barrage of criticism, receiving more than 6,000 comments within a day of its posting.

Similar incidents have occurred elsewhere. On July 1, a demolition team in Shaanxi bound a family of seven with zip ties and duct tape after they refused to accept government compensation and move from their home. Nectar Gan reports for the South China Morning Post:

A relative of the family rushed to the scene after receiving a phone call at about 6 am on Saturday and found a mechanical digger knocking down the house, which was surrounded by several people holding clubs, according to the article.

About 20 metres away, the seven family members were sitting or lying on the ground, crying and calling for help, with their hands and feet bound by zip ties. One of them had his mouth duct taped.

Police were call to the scene an hour later.

[…] The relative was quoted as saying the house was placed under a demolition plan for the area as early as 2014, but the family had refused to move out because they were not happy with the government’s compensation proposal. [Source]

Tags :forced demolitions,word of the week