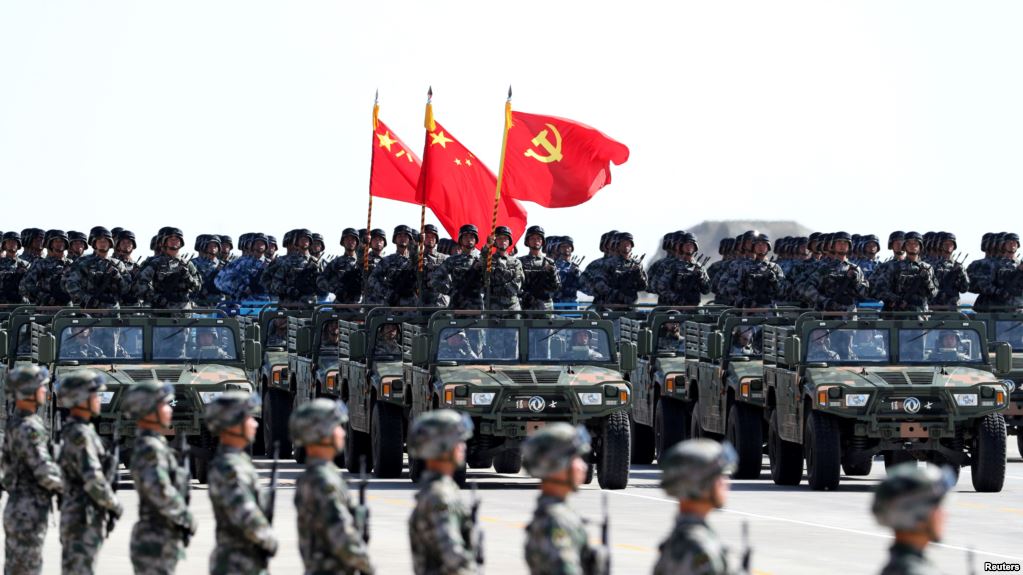 Xi Jinping marked the 90th anniversary of the founding of the People’s Liberation Army at the weekend with a 12,000-strong military parade at the Zhurihe military base in Inner Mongolia. The event sent a forceful if carefully non-specific message to other countries in the region—particularly, perhaps, Taiwan, whose presidential palace is replicated at Zhurihe for training purposes. For the domestic audience, the event was also an emphatic declaration of the Chinese Communist Party’s leadership of the armed forces and Xi’s leadership of the Party ahead of the 19th Party Congress later this year, and a rebuke to advocates of military nationalization—the realignment of the armed forces to serve the country, not the Party.

One expression of this was a procession of vehicle-borne flags: first the Party’s, then the nation’s, and finally the PLA’s. The display drew particular attention because it appeared to contravene Article 15 of the 1990 National Flag Law, which states that "the National Flag, when raised or carried in a procession with another flag or flags, shall be in front of the other flag or flags."

Beijing-based scholar Zhang Lifan told RFA’s Chinese service that the breach was reflective of China’s current situation, in which the authorities “say one thing and do another” regarding rule of law. The Party, he suggested, basically regards the country as spoils of war which, after their victory in 1949, they are now free to do with as they please. (The Party has dismissed any conflict between its actions and the rule of law, asserting that "Party leadership and Socialist rule of law are identical.")

On Twitter, Australia-based scholar Qiu Yueshou highlighted a 1944 Xinhua editorial describing nationalization of the armed forces as a fundamental policy of the then prospective "New China." Xinhua reportedly described a Dǎngwèijūn 党卫军 (or "Party-Protection Army," a Chinese term used to refer to the Nazi SS) as a hallmark of fascism and the Communists’ rival Chiang Kai-shek.

FreeWeibo archived a handful of deleted comments on the ordering of the flags, indicating that more widespread censorship likely occurred.

The principle of the Party’s foremost position was further underlined in Xi Jinping’s speech after the parade. From Catherine Wong at South China Morning Post:

“You shall be unswervingly loyal to the absolute leadership that the party has over the army, heed the call of the party, follow the party,” Xi said after inspecting the troops.

“You shall extend the battleground to wherever the party points towards.”

[…] “I firmly believe that our heroic army has the confidence and capability to defeat all enemies who dare to offend [China],” he said.

[…] “We are closer than at any time in history to realising China’s great dream of national revitalisation, and building a strong people’s army,” he said, reiterating his call for the country to have a “world-class army”. [Source]

Xi reiterated these points at a celebration in the Great Hall of the People on Tuesday. From Xinhua:

"No one should expect us to swallow bitter fruit that is harmful to our sovereignty, security or development interests," said Xi, also general secretary of the Communist Party of China (CPC) Central Committee and chairman of the Central Military Commission (CMC), during a speech at a ceremony to mark the 90th anniversary of the People’s Liberation Army (PLA).

[…] The PLA should firmly safeguard the CPC’s leadership and the socialist system, protect national sovereignty, security and development interests as well as regional and world peace, Xi told senior officials and military personnel gathered at the Great Hall of the People in Beijing.

"The Chinese people love peace. We will never seek aggression or expansion, but we have the confidence to defeat all invasions. We will never allow any people, organization or political party to split any part of Chinese territory from the country at any time, in any form," Xi said.

[…] "The armed forces must follow the banner, the direction and the will of the Party at all times and under any circumstances." Xi noted, saying that the principle is an irreversible truth that the CPC has attained in struggles of blood and fire. [Source]

CCTV’s broadcast of the speech included a brief glimpse of Xi’s teleprompter screen, showing the character 岿 kuī (from 岿然 kuīrán, meaning "towering" or "lofty") annotated with pinyin in an apparent effort to avoid an embarrassing stumble or misreading. At last year’s G20 summit in Hangzhou, Xi misread "be lenient to farmers" as "loosen clothing," prompting online hilarity and fueling scorn in some quarters about his level of education.

The Guardian’s Tom Phillips presented a range of responses to Xi’s rhetoric in a pair of reports:

Observers say Xi’s emphatic calls for obedience are part of a push to shore up his political position ahead of the 19th Communist party congress this autumn.

“What he is saying, technically, is nothing new. The PLA has always been the military wing of the Communist party,” said Steve Tsang, the head of the Soas China Institute.

“But it is blatantly obvious to everybody within the party that this emphasis on loyalty to the party – which doesn’t need to be emphasised since it has always been the case – is sending a message that he now has the military fully under his control and that they are loyal to the leadership, of which he is the core.”

“It’s a signal to the rest of the establishment: ‘I’m building up momentum … there is no reason for anyone to get hurt. Just be good party members and support your leadership.’” [Source]

The ordering of flags was not the only recent protocol departure emphasizing Xi’s central role. From Charlotte Gao at The Diplomat:

At that time, it was still unclear if the unusual change of wording was specifically designed for the Hong Kong parade or not. Now we know that it’s a more long-term change, as the troops in the Army Day Parade also shouted “Greetings, chairman!” to Xi.

In this case, the Hong Kong commentator Ma Dingsheng’s analysis during the Hong Kong’s military parade is proved right: “‘Chairman’ demonstrated Xi’s paramount status, since there are many ‘leaders,’ but only one ‘chairman.’” [Source]

FreeWeibo again indicates some censorship of comments on the change.

Almost exactly a year ago, the Organizing Committee of the Rio Olympics apologized for the non-standard display of China’s national flag. In that case, too, the breach concerned the Party’s central role: the organizers used a flawed flag on which the four smaller stars, representing the people, were oriented horizontally, instead of being correctly rotated to face the larger one, which stands for the CCP. Sixty-four percent of respondents to an online poll by the nationalist-leaning Global Times interpreted the error as a deliberate insult.

The flag’s precise geometry is defined in the 1990 law, which also specifies situations in which the flag must (e.g. at Tiananmen, and in weekly school flag-raising ceremonies), and may not (e.g. in ads, or at private funerals) be displayed. The law also allows detentions of up to 15 days for "relatively minor" cases of "publicly and wilfully burning, mutilating, scrawling on, defiling or trampling upon it." Similar protections are now planned for China’s national anthem, potentially banning its use at funerals and providing for similar punishment for those who "desecrate" it with modifications such as satirical lyrics. China Media Project’s David Bandurski wrote about the anthem’s history and its incongruity with these proposed restrictions at Quartz last month.