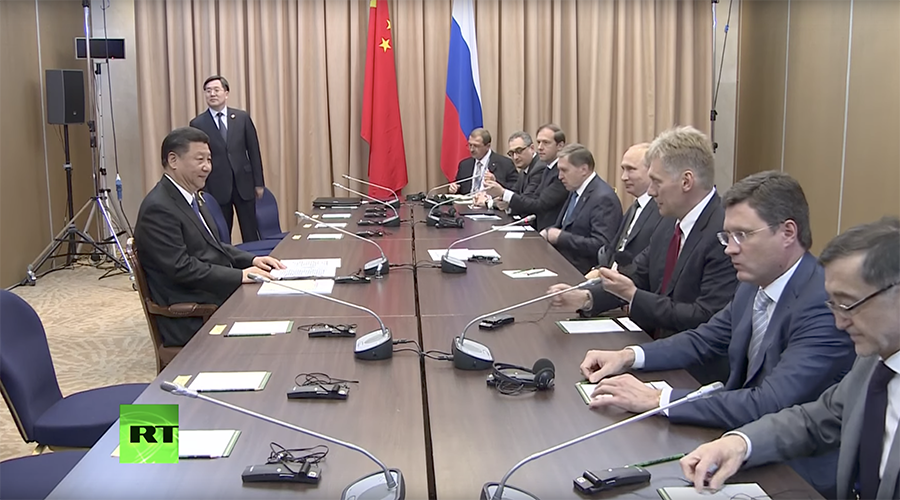 Xi Jinping has gathered an impressive array of titles over the past four years, from the official through the avuncularly casual to the firmly unapproved. Last week, he gained another at a meeting with his Russian counterpart Vladimir Putin on the sidelines of the 17th Shanghai Cooperation Organization summit in the Kazakh capital, Astana.

Xinhua’s account of the meeting focused on the two sides’ pledges to deepen bilateral ties on various fronts, and to promote the SCO’s unity, coordination, and international influence. But Russia Today noted that most of the Chinese delegation was late to the meeting, leaving Xi and an aide to face the Russian team alone. As they waited for the latecomers, Putin jokingly labeled Xi a "lone warrior."

Despite the episode’s relatively innocuous nature, it has been the subject of censorship on Chinese social media, including WeChat and Weibo. Related images as well as text comments have been targeted: images have traditionally been regarded as more resistant to automatic filtering, but a recent Citizen Lab report on censorship related to the Black Friday or 709 crackdown on rights lawyers found that this was beginning to change.

The following post was deleted from Weibo, together with its comments. A selection of these gathered by CDT’s Chinese editors show users mining the incident for tongue-in-cheek political omens or broader humor: “At a meeting with Putin in Kazakhstan, the Chinese delegation was late, so Chairman Xi was left alone facing the Russian team. His translator hadn’t arrived yet either. You can see his aide Ding Xuexiang’s impatient expression. So awkward! I don’t know if it was a protocol problem on the Kazakh side or an error in the Chinese Foreign Ministry’s arrangements, but someone should take responsibility. Putin laughed that Xi was a "lone warrior"! There have been no news reports, but it’s on YouTube. This isn’t a story, it’s a big accident” [a pun on gùshì (故事, story) and shìgù (事故, accident)]

JiuyueJiuDeJiu (@九月九得酒): Baobao [a nickname for Xi based on his conspicuously humble steamed bun consumption] must have been panicking, wondering if there’d been a coup

BijiaoWuliaoDeSheshou (@比较无聊的射手): This photo’s already been deleted from my WeChat group

LurouFanZaiJiaGeDan (@卤肉饭再加个蛋): Pooh Bear versus the Russian Bear [a reference to a series of memes in 2013 comparing Xi and Barack Obama to Winnie the Pooh and Tigger.]

XingjianXiaowu_3 (@行健小屋_3): Let the leaders go first! [A reference to an infamous cry at the Karamay theater fire in 1994, from which 20 officials escaped while 288 children died.]

patiencepeace (@patiencepeace): That does it. When loyalty is not absolute, it’s absolutely not loyalty. [Chinese]

Other comments alluded to Xi’s boasts of Herculean feats of strength as a sent-down youth and prodigious consumption of international literature, and to his purportedly low level of education:

ZhaoXGuoshi (@走X国师): He should have recited a list of book names from memory, or hoisted the table onto his shoulder and gone on one of his three mile runs

Leyuan_Wuzei (@乐园_乌贼): The elder [Jiang Zemin] is so proficient in Russian, he doesn’t even need a translator. Then you have this guy with a middle-school educational level

ShangDangJun (@上党君): Since there’d already been a diplomatic breach, there was no need to be scared about whether he’d actually read all those books. He should have taken the chance to chat to Putin about the great works of Russian literature, as Putin had a translator there. [Chinese]

Xi’s secondary schooling was cut short by the Cultural Revolution, and detractors are skeptical that his later under- and postgraduate studies at Tsinghua University were more than a fig leaf afforded by his political pedigree and later rank. As a result, some refer to him as Chūzhōngshēng (初中生), or "the junior high-schooler." Such doubts were fueled by an error in a speech last year, when he accidentally said "loosen clothing" instead of "be lenient to farmers." "Even someone with a middle school education should not have made such a mistake," the University of Pennsylvania’s Victor Mair commented at the time.