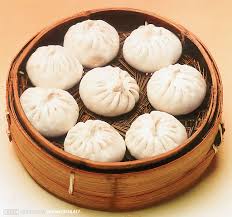 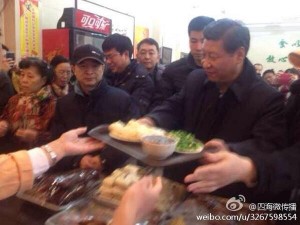 Xi Jinping waits in line at a Qingfeng Steamed Bun Shop in December of 2013. (Weibo/@四海微传播)

In December 2013 Xi Jinping stepped in line at a Beijing Qingfeng Steamed Bun Shop, ordered lunch, and carried his tray to a table—an early episode in a continuing presidential image-crafting campaign. With a single photo on Weibo, the story exploded online as censors quickly moved to redirect online reaction. While the publicity boosted business at Qingfeng and provided the president with an everyman moment, it also attracted petitioners to the restaurant and drew criticism that Xi was merely putting on a “political show.” A few weeks after Xi’s lunch of steamed buns (bāozi), mustard greens, and stir-fried pig liver—a culinary combination in which netizens tried to divine the political direction of Xi’s then nascent leadership—the State Council Information Office issued a directive for websites to “moderate the ‘heat’” of coverage. Xi’s Qingfeng publicity stunt also earned him the nickname “Steamed Bun Xi” (习包子 Xí Bāozi).

For more on Xi’s image-crafting campaign, or Xi Jinping in general, read prior coverage via CDT.