On January 22, the Politburo announced the establishment of the Central Commission for Integrated Military and Civilian Development. Reporting directly to the Politburo, the agency is chaired by top Party and state leader Xi Jinping, becoming his 12th official post. In the wake of the news of Xi’s fresh title—and drawing inspiration from the self-promotion strategy of eccentric recycling tycoon Chen Guangbiao—CDT resident cartoonist Badiucao was gracious enough to design a new business card for the “core” leader:

Complete with an English B-side for Xi’s many diplomatic expeditions:

The address and telephone number used is for an old haunt of Xi’s: the Qingfeng Steamed Bun franchise, where he launched his presidential image-crafting campaign back in 2013.

On January 23, Weibo user ChongziZaiBeijing (@虫子在北京) shared a joke about the President and CCP General Secretary’s ever-expanding list of concurrent official titles. The post was deleted from Weibo, but stored by FreeWeibo: 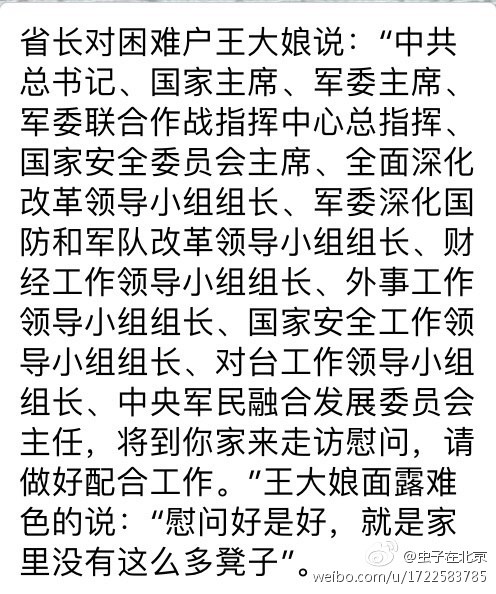