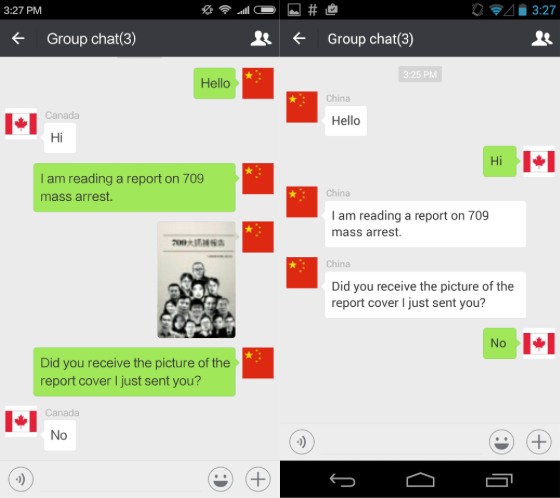 A new report from the University of Toronto’s Citizen Lab probes censorship on Tencent’s WeChat messaging service related to the July 2015 “Black Friday” or “709” crackdown, in which hundreds of rights lawyers, activists, and others were detained. While most were soon released, several have since been tried and sentenced, while others remain in custody awaiting trial or charges, or have been released pending further investigation. The Citizen Lab researchers identified 42 blocked keyword combinations related to the crackdown, nearly 90% of which referred to the name of one of the victims. While images have traditionally been viewed as resistant to automated censorship because they are harder to identify than text, the team found that dozens of images related to the crackdown are also being filtered in real time. Citizen Lab director Ron Deibert summed up the report’s findings and their implications in a separate blog post:

Unfortunately, as our experiments show, a good portion of that discussion fails to reach Chinese users of WeChat and Weibo. Our research shows that certain combinations of keywords, when sent together in a text message, are censored. When sent alone, they are not. So, for example, if one were to text 中国大陆 (Mainland China) or 王全璋的妻子 (Wang Quanzhang’s Wife) or 家属的打压 (Harassment on Relatives) individually, the messages would get through. Sent together, however, the message would be censored. The Citizen Lab’s Andrew Hilt’s has created a visualization showing these keyword combinations here: https://citizenlab.org/709crackdownviz

In addition to a large number of censored keyword combinations our tests unearthed, we also discovered 58 images related to the 709 Crackdown that were censored on WeChat Moments for accounts registered with a mainland China phone number. (For accounts registered with a non-mainland China phone number, on the other hand, the images and keyword combinations go through fine). This is the first time we have documented censorship of images on a social media platform, and we are continuing to investigate the exact mechanism by which it takes place.

[…] Our report serves as a reminder that for a large portion of the world, social media act as gatekeepers of what they can read, speak, and see. When they operate in a repressive environment like China, social media can end up surreptitiously preventing important political topics from being discussed. Our finding that WeChat is now also systematically censoring images as well as text opens up the daunting prospect of multi-media censorship and surveillance on social media. [Source]

The report itself includes extensive background on the crackdown and subsequent developments such as Chief Justice Zhou Qiang’s hailing of the resulting prosecutions as one of 2016’s key achievements; allegations of torture by several of the lawyers, and the official response that these were “fake news”; and the 11-nation diplomatic letter quietly sent in February to express concern at the situation. It goes on to explain research methodology, findings, and caveats, as well as the researchers’ exploration of broadly similar (but not identical) keyword censorship on Sina Weibo.

[…] In addition to blocking of keyword combinations related to crackdowns on rights defenders, we also found that WeChat filters images related to the event. Examples of blocked images include the cover of China Human Rights Lawyers Concern Group’s “Report on 709 Mass Arrest,” an infographic explaining the “709 Storm,” an open letter from defenders and their relatives, profiles of convicted lawyers and activists, the twenty six rights defenders on bail while awaiting trial, and fifteen other arrest cases.

[…] To get a sense of the extent of image censorship related to the crackdown on WeChat, we used the term “709大追捕” (709 Crackdown) in Google Image Search and identified 575 relevant images between March 18 and 21, 2017. We went on to upload the images to group chat and to Moments for testing. Around ten percent of our sample (58 out of 575) triggered censorship on Moments, most of which are infographics related to the 709 Crackdown, profile sketches of the affected lawyers and their relatives, or images of people holding the slogan “Oppose Torture. Pay attention to Xie Yang” (“反对酷刑，关注谢阳”). All of the images we found censored WeChat Moments are available here.

Our tests showed that an image on Moments is filtered according to that image’s content in a way that is robust to some modifications to the image. More work is needed to determine what kinds of modifications can be made to an image while having it still be censored by the WeChat image filter and to identify the kind of algorithm WeChat is using to detect filtered images in general. [Source]

Citizen Lab’s Lotus Ruan told South China Morning Post that the image filter appears to identify specific images, rather than analyzing images’ content: “For example, while a couple of images of people holding placards saying, ‘Oppose Torture, Pay Attention to [rights lawyer] Xie Yang’ were censored, we didn’t experience censorship when we produced and submitted our own image.”

The report notes signs that despite the platform’s appearance of relative privacy, WeChat is in fact actively monitored either by the authorities or on their behalf. Another such indication is the apparent role of intercepted WeChat postings in Taiwanese activist Lee Ming-che’s detention last month. Lee remains missing.

For more on censorship related to the crackdown, see leaked media directives published by CDT on the initial detentions, subsequent prosecutions, and other aspects of the aftermath.