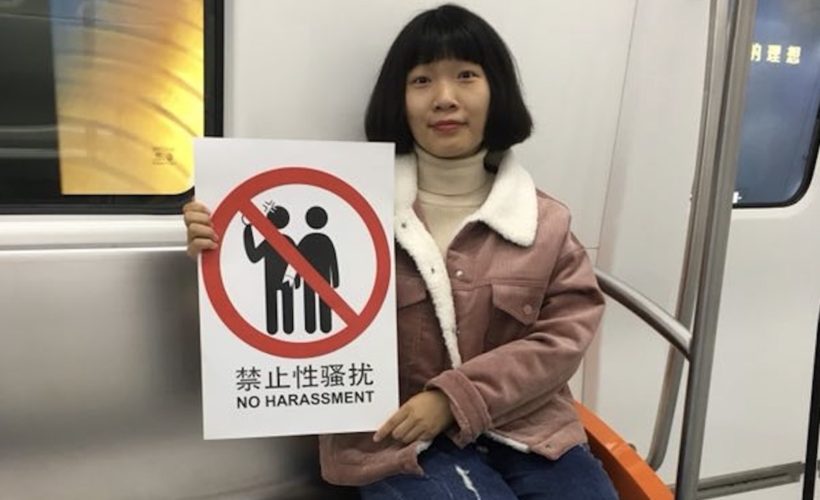 After serial sexual assault by American movie producer Harvey Weinstein was publicly detailed in October—having been frequently alluded to by entertainment industry insiders for decades—the #MeToo campaign was launched on English-language social media platforms to give the public a sense of how widespread this problem is in American society. As sexual assault accusations continue to hit high-profile American politicians, entertainers, and journalists, the #MeToo campaign also continues, and foreign language equivalents have followed suit. The Chinese equivalent “#我也是#” is searchable on Weibo, but the conspicuously sparse results suggest that some posts containing the hashtag are being harmonized. At the Hong Kong Free Press, Catherine Lai profiles Chinese journalist Sophie Huang Xueqin, whose unsuccessful attempts to publish an account of her own sexual assault by a superior demonstrate the cultural and political barriers to a #MeToo style campaign taking root in China. Huang was moved to begin spreading awareness of the issue last year after a similar case came to light.

[…]The man who attacked Huang was also in a position of power over her at the time. In 2012, the newly-graduated Huang was in a batch of new employees at the agency, which she chose not to identify for fear of repercussions. The senior reporter was well-respected in the field, having covered big stories such as the 2008 Sichuan earthquake and the 2008 Beijing Olympics.

[…] Huang left her job a month later and – initially – did not publicly speak about her experience. However, last year, a 21-year-old female intern at the Guangdong paper Nanfang Daily told police that she had been raped by a senior reporter who was her mentor at the paper. The reporter was arrested on rape charges, but he was released a few months later, after prosecutors decided there was not enough evidence to proceed.

[…] “China is in the midst of a huge anti-feminist crackdown, so feminist activists who have tried to launch various campaigns against sexual harassment are often persecuted by the police, making it extremely difficult for a broad, anti-sexual harassment campaign to gain traction,” [Leta] Hong Fincher said.

[…] She added that more young women are speaking out about their experiences on social media, but internet censors often step in quickly to prevent a hashtag like #MeToo from going viral.

Huang describes the reaction to sexual harassment of journalists within the media industry itself as “ignoring the elephant in the room.” She tried to get her account of harassment published last year, but no outlet she approached would publish it. […] [Source]

Leta Hong Fincher also discussed the need for and limits to a Chinese #MeToo campaign in a recent episode of SupChina’s Sinica podcast.

TechNode has published an English-translation of Sophia Huang Xueqin’s WeChat account of her assault and survey of other female colleagues with similar experiences, including examples of reader backlash to first-person accounts and coverage of the issue:

Last year, when the Nanfang Daily rape case broke out, I was upset because some criticism was about the victim, the female intern from Jinan University in Guangzhou: “Maybe she’s just an open person”; “The way she dressed was way too sexy”; “She even had tattoos!”

So I took up my courage to say, ME TOO. In the Chinese media circle, she was not the first victim, and neither was I. There are many cases, which could be her, him, and you.

Friend E is a professional reporter, cheerful, attractive. Her lingdaoliked to bring her on the business trips, saying, “Your goal is to be the proper ‘three company’ (Chinese slang for escort girls), you should accompany us to eat, drink, and scribe. Don’t get us wrong, and it’s ‘scribe’ not ‘screw’.” She did not take it seriously though until one drunk lingdao started to take off his trousers in front of her.

I can keep on telling more stories like this. The victims are different in personalities, and they encountered different levels of harassment. The result is the same: keep silent and leave no matter how much they loved about this career in journalism. Just look at this mail sent to a Caixin reporter from a reader, how can you ignore the problem?

Earlier this month at SupChina, Simone McCarthy opened up an analysis of China’s sexual harassment problem with Sofia Huang Xueqin’s experience—and her frustration at the ridiculing comments on the above quoted WeChat post. In the article, McCarthy surveyed further examples of the political and cultural backlash to a #MeToo moment in China:

This [victim-blaming] is one reason why, while every casual conversation about workplace harassment seems to elicit anecdotes about “something that happened to a friend,” a #MeToo-type movement still feels far away for China. For example, last week, a Shanghai woman received nasty online comments after publicizing a post about a serial molester in her neighborhood, and her WeChat post was censored.

In addition to the cultural stigmas associated with coming forward, China still largely lacks repercussions for sleazy bosses and workplace assaulters. A report compiled by the public interest Beijing Qianqian Law Firm 北京千千律师事务所 found that more than 31 percent of women chose to stay silent about sexual harassment in the workplace because they felt that speaking up would not get anything resolved. The same report indicates that the same percentage of employees accused of harassment received no consequences whatsoever.

Individuals or groups who try to bring public awareness to sexual harassment or to instill change often encounter pushback from authorities. Feminists staging protests are arrested or harassed to the point that they must leave their homes. A tightening of civil society in recent years has squeezed resources dedicated to women’s rights. For example, the public interest law firm mentioned above, Beijng Qianqian, was founded by the Beijing Zhongze Women’s Legal Counseling and Service Center, a leading, globally recognized non-governmental organization advocating for women’s legal rights; Zhongze was shuttered early last year after 20 years of operation, reportedly under government pressure.

[…] Many cases do not enter the court system, according to Lu Xiaoquan 吕孝权, a lawyer at the public interest Beijing Qianqian Law Firm. “It is very uncommon that women come forward because they think it is a scandal, and they are embarrassed by this kind of situation,” said Lu. “This relates to China’s current circumstances and cultural environment — it takes time to develop the conditions conducive for women to come forward.” […] [Source]

A note from our editor @goldkorn: "We believe sexism and its attendant ills are one of the most significant stories of our time, but there is little focused coverage of such issues in China. We’re going to remedy that." https://t.co/hZzqzCfFnK Start here: https://t.co/RYibAaWz69

In October, Foreign Policy’s Bethany Allen-Ebrahimian recalled her own experience being raped in China, writing, “there’s little chance that the #MeToo campaign will trend in China anytime soon. Chinese social media is its own isolated ecosystem, by design. Twitter and Facebook are both blocked in China, precisely so that outside ideas and movements can’t spread.”