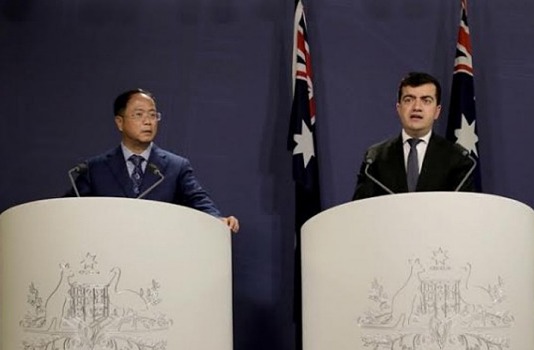 Australian Prime Minister Malcolm Turnbull plans to introduce legislation to limit foreign contributions to political parties. The legislation, which is modeled on the United States’ Foreign Agents Registration Act, applies to all foreign countries, but appears to be targeting Chinese influence, which has been subject of heated debate in Australia. Tom Westbrook reports for Reuters:

Turnbull told reporters in Canberra that foreign powers were making “unprecedented and increasingly sophisticated attempts to influence the political process” in Australia and the world. He cited “disturbing reports about Chinese influence”.

The announcement came as concern grows that Beijing may be extending its influence and as relationships between Australian politicians and Chinese government interests have become increasingly contentious. [Source]

As the new legislation was announced, a contract was leaked that showed former trade minister Andrew Robb was paid AU$880,000 by a company with ties to Beijing, for a vaguely defined role.
Earlier, Senator Sam Dastyari resigned from a senior position in the Labor Party after his dealings with an influential Chinese businessman, Huang Xiangmo, came under scrutiny, including revelations that he had warned Huang that his phone may be tapped by Australian intelligence services. Huang is believed to have links to the Chinese government, and many in Australia now believe Dastyari’s views on China may have been tainted by his support. From Nick McKenzie, James Massola, and Richard Baker at the Sydney Morning Herald:

Also among the revelations that damaged Mr Dastyari were comments he reportedly made at a press conference with Mr Huang that contradicted Labor policy on the South China Sea, and echoed Beijing’s policy position. [Source]

In a recently revealed 2005 interview by the official China Economic Net, Dastyari used a term that is only used by the Chinese government to describe the country’s war with Japan. James Massola and Nick McKenzie report for Sydney Morning Herald:

In a 2015 interview with the China Economic Net website – which is designated by the Chinese government as a ‘key’ media outlet – Senator Dastyari is quoted as extending his “warm congratulations” to the Chinese people on the anniversary of the victory of the “Chinese People’s War of Resistance Against Japanese Aggression and the World Anti-Fascist War”.

Dr Fitzgerald claimed Senator Dastyari would have had to learn the phrase “from people well-versed in the political ideology of the Chinese Communist Party”. [Source]

“There is evidence that he may have been recruited as an agent of influence,” said Ross Babbage, a former head of strategic analysis at the Office of National Assessments, the government’s peak intelligence adviser. “That’s my belief.”

Being an “agent of influence” doesn’t mean the 34-year-old senator was spying for Beijing. Instead, it refers to a global campaign to build long-term support for China and its policies, and collect information, around the world through business and political relationships. [Source]

Last week, Huang stepped down as chairman of the Australian Council for the Promotion of the Peaceful Reunification of China. The council is believed to be closely linked with the United Front Work Department, an organization which reports to the CCP Central Committee and seeks to increase the Party’s influence abroad, especially among Chinese diaspora communities, though Huang has denied the connection. Kirsty Needham reports for the Sydney Morning Herald:

On Saturday, Huang’s last act as outgoing leader was to stress that the council was “an independent, non-government association” that wasn’t attached to the Chinese or Australian government, according to the council’s meeting report in Chinese.

Members supported “peaceful unity”, “opposed splittism” (often a reference to Taiwan and Tibet) and supported the One China policy which was the national policy of China and Australia, it said.

Huang told the meeting it was important, like never before, to be united and that “overseas Chinese forever have common blood”.

The Council has been accused of working with the Chinese government’s United Front Work department, which is tasked to liaise with non-Communist parties and religious groups within China, and the overseas Chinese diaspora. [Source]

While Huang’s relationship with Sam Dastyari has been prominent in recent news reports, Huang’s associates have made donations to other Australian political parties as well. As Peter Hatcher writes in SMH:

But the truth is that the leaders and top officials of both Labor and the Coalition parties were warned in face-to-face briefings about their contacts with Huang by Australia’s counterespionage agency, ASIO, as early as 2015.

ASIO’s director-general, Duncan Lewis, told them that Huang, a big donor to the political parties, had strong ties to the Chinese Communist Party.

Yet even after this warning, the parties continued eagerly taking Huang’s money. Since the ASIO warning, Labor has taken $141,000 from Huang affiliates, the Liberals $122,960 and the Nationals $15,000. [Source]

Under President Xi Jinping, the United Front has ramped up their activities abroad. After Xi Jinping called the organization China’s “magic weapon for the victory of the party’s cause,” at October’s 19th Party Congress, United Front Executive Vice Minister Zhang Yijiong held a rare press conference in which he was asked about United Front activities in Australia. From another article by Kirsty Needham at SMH:

Zhang elaborated that returning overseas students, managers in foreign companies and new media workers were now on United Front’s radar in China, and it would “support” overseas Chinese.

[…] If United Front is a by-word for social cohesion to China, to overseas Chinese dissident groups, Tibetan and Taiwanese communities, it instead stands for organised interference in their activities.

Asked directly about Australia, and whether United Front had been organising spying, Zhang replied overseas Chinese should “first of all respect the laws and regulations of the host country”. [Source]

In addition to concerns about spying and political influence from China, Australia has in recent years confronted efforts by the Chinese government to influence local Chinese-language media, academia, and protests on political issues such as the South China Sea. A recent decision by Allen & Unwin publishers to delay publication of a book by Clive Hamilton that looks at Chinese influence in Australia further stoked such concerns. In light of such developments, and a changing relationship with the new U.S. administration, Australians are debating whether their future alliances should lie with China or America. Jane Perlez and Damien Cave report for The New York Times:

Australia has tried to balance its growing economic dependence on China with its longstanding post-World War II security relationship with the United States.

But China’s assertive behavior in the South China Sea, and Mr. Trump’s decision to abandon the Trans-Pacific Partnership, the trade pact America once sought to lead, have rattled the underpinnings of Australia’s policies.

Australia’s leaders have gone beyond the white paper’s careful reassurances, openly declaring that Australia must confront the shifting power dynamics of the region.

[…] “Now power is shifting, and the rules and institutions are under challenge,” [Turnbull] said. “The major players are testing their relationships with each other, while undergoing rapid change themselves.” [Source]

As Nick Bisley writes for the Lowy Institute, the wariness over the bilateral relationship is mutual, as an increasing distrust of Australia in China has made dialogue between the two sides more difficult:

Even though Australia has been at pains to emphasise that it is not taking sides in the South China Sea dispute, the country’s very public backing for the arbitration tribunal decision and its repeated figuring in public pronouncements appears to be a major concern. ‘Australia is not a claimant, so why does it make it such an issue?’ the Chinese wonder. Indeed, Australia has no disputes or conflicting security interests with China yet it repeatedly emphasises that China is making the region less secure. This seems to get under the skin of many scholars and commentators.

A second issue relates to the media treatment of China’s influence in Australia. The sensational and sinister tone in which claims about Chinese influence are presented is seen as problematic at best and downright offensive at worst. The Four Corners/Fairfax report came in for particular invective. And while some of the reporting was poorly sourced and sensationalism often hard to resist, few could accept that there was any problem at all. Viewed from China the issue seemed to be a complete beat up. Whether talking about interference on university campuses, dual use research or political donations, minor errors would be used to close down dialogue and discussion. [Source]