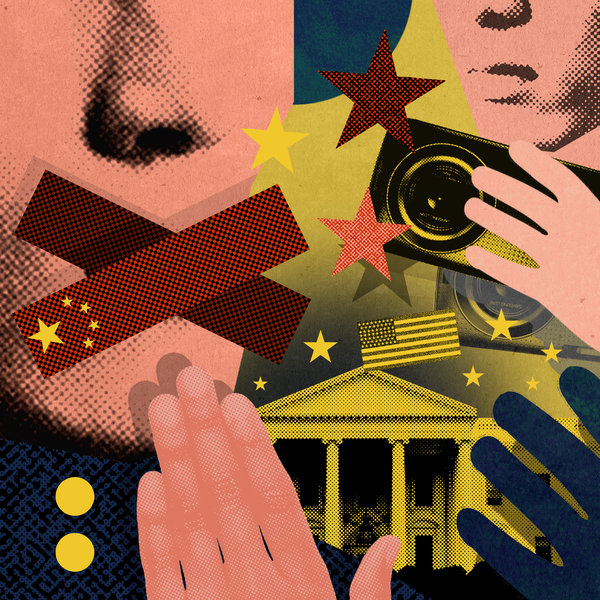 At The New York Times, Wang Dan, a former leader of the 1989 Tiananmen Square protests, looks at the growing reach of Chinese censors on American college campuses as Beijing attempts to export its political control beyond its borders. Chinese international students studying in the U.S. were discouraged from attending Wang’s forums on Chinese politics due to fear of reprisal.

[…O]ver the past three months, my efforts on American campuses have been stymied. The Chinese Communist Party is extending its surveillance of critics abroad, reaching into Western academic communities and silencing visiting Chinese students. Through a campaign of fear and intimidation, Beijing is hindering free speech in the United States and in other Western countries.

The Chinese government, or people sympathetic to it, encourage like-minded Chinese students and scholars in the West to report on Chinese students who participate in politically sensitive activities — like my salons, but also other public forums and protests against Beijing. Members of the China Students and Scholars Association, which has chapters at many American universities, maintain ties with the Chinese consulates and keep tabs on “unpatriotic” people and activities on campuses. Agents or sympathizers of the Chinese government show up at public events videotaping and snapping pictures of speakers, participants and organizers.

Chinese students who are seen with political dissidents like me or dare to publicly challenge Chinese government policies can be put on a blacklist. Their families in China can be threatened or punished.

When these students return to China, members of the public security bureau may “invite” them to “tea,” where they are interrogated and sometimes threatened. Their passport may not be renewed. One student told me that during one of his home visits to China he was pressured to spy on others in the United States. [Source]

Australia has also recently been confronted with Chinese government influence on its academic and publishing sectors. Publisher Allen & Unwin announced plans to postpone the release of Clive Hamilton’s book on Chinese influence in Australia for fear of possible legal action from Beijing. The book’s delay has sparked widespread criticism as the country grapples with its economic dependence on China and the consequent growth of Beijing’s interference in its domestic affairs. From Jacqueline Williams at The New York Times:

The decision this month to delay the book, “Silent Invasion: How China Is Turning Australia into a Puppet State,” has set off a national uproar, highlighting the tensions between Australia’s growing economic dependence on China and its fears of falling under the political control of the rising Asian superpower.

Critics have drawn parallels to decisions this year by high-profile academic publishers in Europe to withhold articles from readers in China that might anger the Communist Party.

But the case has struck a particularly sensitive nerve in Australia, where the book’s delay is the latest in a series of incidents that have raised concerns about what many here see as the threat from China to freedom of expression. [Source]

Allen & Unwin is not the only major Western publisher that has succumbed to pressure from Beijing to censor material critical of China. The book’s delay is the latest in a series of incidents that have raised concerns about Chinese attack on freedom of expression. Last month, scientific publishing company Springer Nature caved in to Chinese government request and blocked hundreds of articles on its Chinese website that touched on sensitive political topics. In August, Cambridge University Press withheld more than 300 articles from the Chinese website of China Quarterly, before reversing the decision in response to widespread criticism.

In Ghana, artist Bright Tetteh Ackwerh has published a series of cartoons criticizing Chinese influence in the country. He has continued to use art to speak out against controversial Chinese government activities in the country despite protests from Beijing. Kwasi Gyamfi Asiedu at Quartz reports:

In the image, China’s president Xi Jinping is pouring a sludge of brown water from a Ming dynasty vase into bowls held by Ghana’s president and the minister of natural resource. Next to Xi, China’s ambassador to Ghana happily clutches a gold bar.

The Chinese embassy was reportedly infuriated by the cartoon and issued a complaint to the Ghanaian government on media coverage of the arrests of several Chinese miners involved in illegal mining, which is known locally as “galamsey”. While Ghanaian miners were also arrested, much of the public’s focus has been on the Chinese. Ghana is the second largest gold producer in Africa after South Africa.

[…A]ckwerh, who cites Chinese dissident artist Ai Weiwei as one of his inspirations, wasn’t done. In August, he published another cartoon titled “Occupation,” where the presidents of Ghana, Nigeria and Senegal are arguing over a plate of jollof rice. It’s reference to the so-called jollof wars, a mostly fun debate between West African countries over who makes the best version of the dish.

[…] “I hope my example has given other artists the courage to also contribute to this and things like this. There are things we have the power to do that even governments can’t,” he said. [Source]

Meanwhile, more direct efforts to gain support for the Communist Party abroad have been stymied. A group of visiting Chinese scholars at the University of California, Davis disbanded a Chinese Communist Party branch that they set up at the university after realizing they may have violated U.S. laws. Nectar Gan and Zhuang Pinghui at South China Morning Post report:

Mu Xingsen, secretary of the party branch, confirmed its establishment when contacted by the South China Morning Post on Sunday but said it had already been dissolved.

“It is because we have later learned that this [establishing a party branch] does not comply with the local laws,” Mu said. “Of course we should respect the local laws when we’re here.”

The US Foreign Agents Registration Act (FARA) requires all individuals and groups acting under the direction or control of a foreign government or political party to register with the Department of Justice in advance and regularly report their activities.

[…] The branch, which planned to meet every two weeks, had tasked its members with promoting the organisation to their colleagues or neighbours who were coming to the US, it said, and to absorb party members into the organisation. [Source]