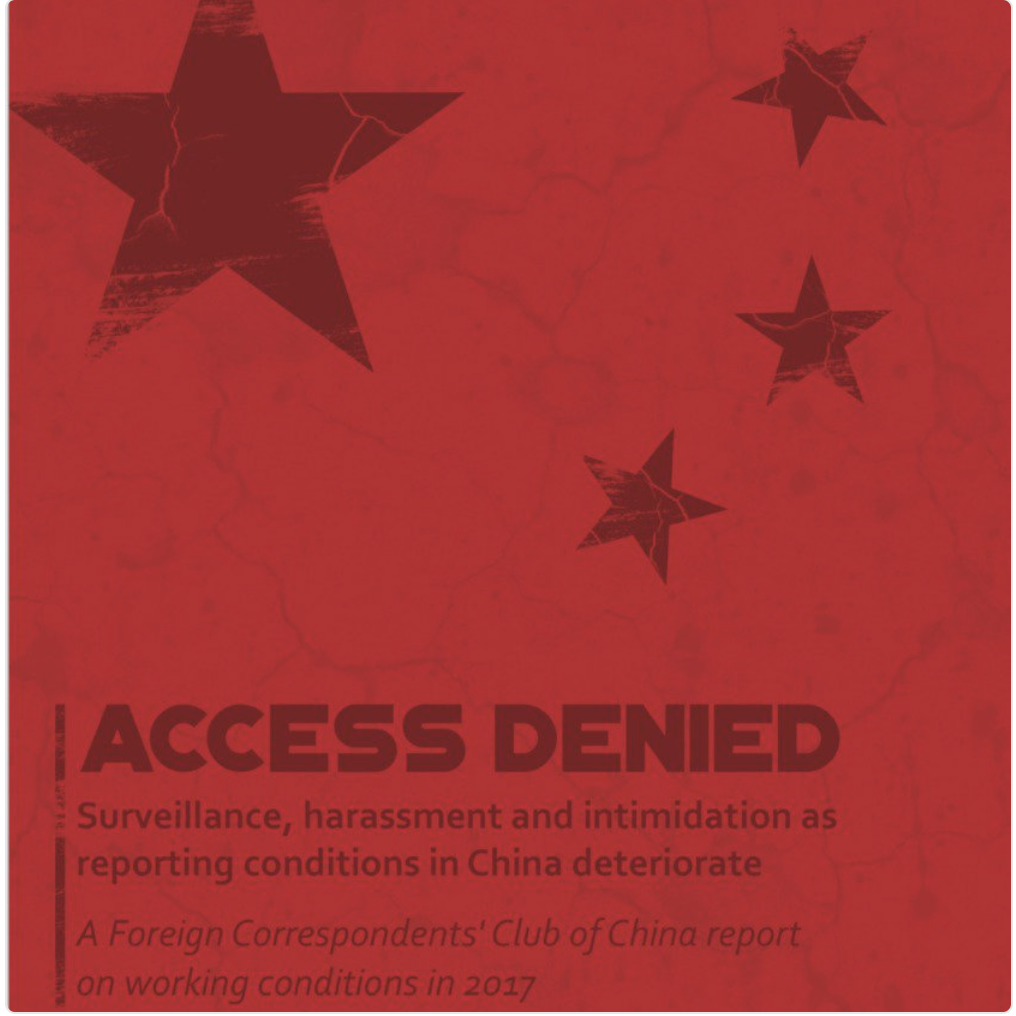 The newly-released results of an annual Foreign Correspondents’ Club of China survey show that the working conditions for China-based foreign correspondents significantly declined last year, with reporters facing increased detainment, harassment, and obstruction while reporting. The AFP summarizes the findings of the most recent FCCC survey:

Almost half of more than 100 correspondents were subjected to some form of interference in 2017 while attempting to gather information, according to the report by the Foreign Correspondents’ Club of China.

[…] The FCCC said the results “provide strong evidence to suggest that, from an already very low baseline, reporting conditions are getting worse”.

The survey found that authorities stepped up the threat of not renewing journalist visas in an effort to convince media outlets to write more favourable reports. [Source]

72 per cent of respondents who traveled to the region were told by officials and security agents that reporting was prohibited or restricted, compared with 42 per cent in the previous year.

[…] Other areas where respondents reported similar difficulties included: Tibetan-inhabited regions; areas near the border with North Korea; areas near Chinese borders with south-east Asian countries; and in industrial districts such as steel-producing districts. [Source]

Xinjiang is the frontline of a controversial nationwide crackdown on terrorism that began in 2014 that has been criticized for targeting members of the Uyghur ethnic minority. Canadian reporter Nathan VanderKlippe, who in 2014 won an Amnesty International media award for his reporting on Uyghur repression and violence in Xinjiang, detailed his brief August 2017 detention in Elishku, Xinjiang earlier this year.

Quite a moment here. China's Foreign Ministry spokesperson at yesterday's press conference: "You may raise your hand and let me know. (No hand raised) No one." https://t.co/qvctZ3SqWK pic.twitter.com/fvN3lecpzf

Amazing response from the Foreign Ministry, which disapproves of this "so-called report" by the "so-called organization" of foreign reporters, and claims survey doesn't, in fact, reflect opinions of any of the journalists who clearly stated their opinions. https://t.co/gTFY9gkMJz https://t.co/kMSe7kqWYN