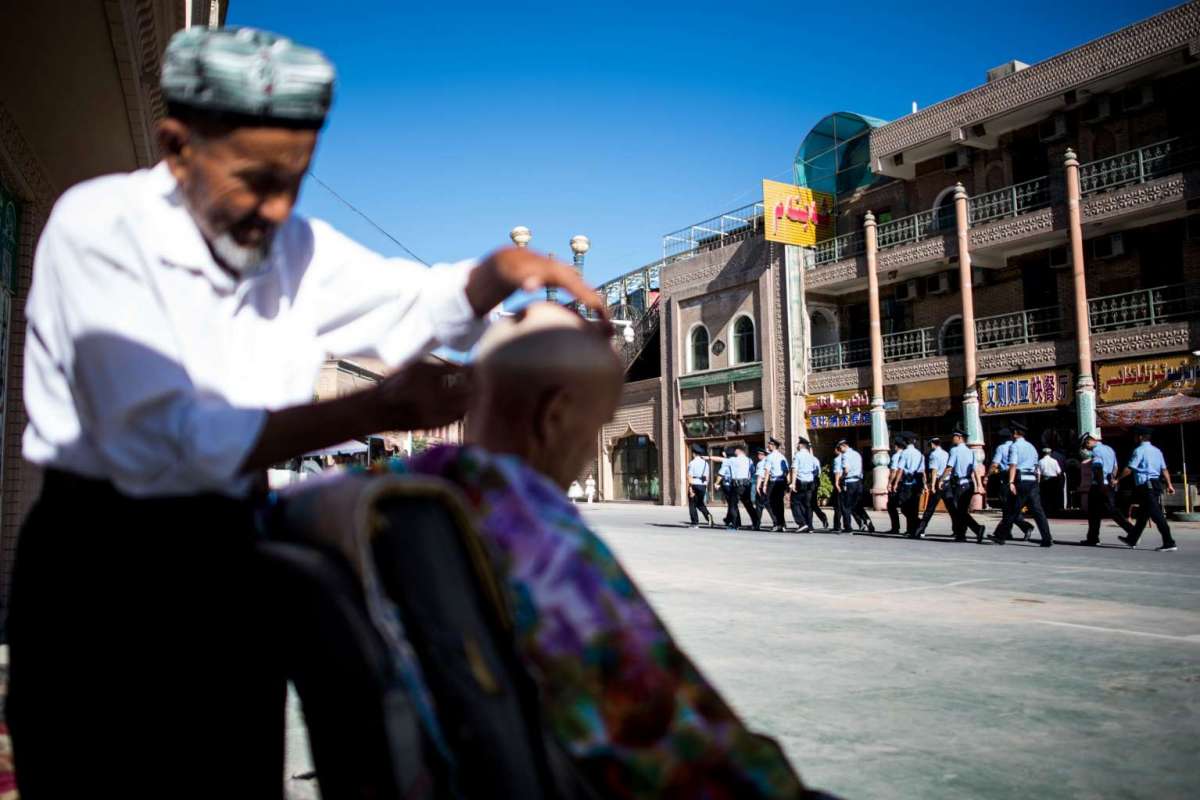 Authorities in Xinjiang have stepped up their efforts to suppress the Islamic identity of the region’s ethnic Uyghurs following the appointment of Chen Quanguo to the position of Party Secretary. UNPO looks at some of the latest repressive measures that have been introduced under Chen to control the religious practices and behaviors of Uyghurs in Xinjiang.

[…Since] he took over last August as Xinjiang’s Communist Party chief, Chen Quanguo has launched even harsher measures—pleased, apparently, by his crushing of dissent in Tibet where he previously served as leader. As in Tibet, many Xinjiang residents have been told to hand their passports to police and seek permission to travel abroad. In one part of Xinjiang all vehicles have been ordered to install satellite tracking-devices. There have been several shows of what officials call “thunderous power”, involving thousands of paramilitary troops parading through streets.

Last month, new rules came into effect that banned “abnormal” beards (such as the one worn by the man pictured in front of the main mosque in Kashgar in south-western Xinjiang). They also called on transport workers to report women wearing face veils or full-body coverings to the police, and prohibited “naming of children to exaggerate religious fervour”. A leaked list of banned names includes Muhammad, Mecca and Saddam. Parents may not be able to obtain vital household-registration papers for children with unapproved names, meaning they could be denied free schooling and health care.

Residents have also been asked to spy on each other. In Urumqi, the region’s capital, locals can report security threats via a new mobile app. People living in Altay in northern Xinjiang have been promised rewards of up to 5m yuan ($720,000) for tip-offs that help capture militants—over 200 times the local income per person.

Across Xinjiang residents have been asked to inform the authorities of any religious activities, including weddings and circumcisions. The government is also testing its own people’s loyalty. In March an official in Hotan in southern Xinjiang was demoted for “timidity” in “fighting against religious extremism” because he chose not to smoke in front of a group of mullahs. [Source]

Attempts by the government to stifle all displays of Islamic identity is part of an ongoing nationwide “war on terror” that was launched in 2014 in response to a series of violent incidents in Xinjiang and elsewhere in China. The government’s fear of unrest has led to the emergence of a police state in Xinjiang where streets and neighborhoods are routinely patrolled by armed security forces. AFP reports on the struggles faced by China’s Uyghurs under heavy police presence in an increasingly volatile environment:

Beijing says the restrictions and heavy police presence seek to control the spread of Islamic extremism and separatist movements, but analysts warn that Xinjiang is becoming an open air prison.

[…] Over the last year, Beijing has flooded Xinjiang with tens of thousands of security personnel, placed police stations on nearly every block, and rolled out tough regulations aimed at “eliminating extremism”.

[…] At police stations, officers monitor screens with direct feeds from mosques as well as other buildings and nearby streets.

In the run-up to Eid in the southwestern desert oasis town of Hotan, police manned checkpoints with rifles and crude spears made from metal pipes.

At one intersection, men in bulletproof vests stopped traffic for a fleet of dozens of heavily armoured trucks, personnel carriers with mounted guns and black vans. [Source]

The Straits Times has assembled a selection of photos documenting life in Xinjiang under strict security and religious restrictions.

The massive security surge and religious restrictions have not been mentioned by China’s state media, which has focused instead on efforts by Chinese officials to bring economic prosperity to Xinjiang in a bid to promote “ethnic unity.” Xinhua recently reported on a call by Yu Zhengsheng, chairman of the Chinese People’s Political Consultative Conference National Committee, to bring “prosperity and stability” to Xinjiang through the pairing assistance program.

Yu urged other regions in the country to support Xinjiang in tackling poverty and implementing employment-based poverty reduction projects, as Xinjiang has vowed to take part in the national effort to lift all Chinese from poverty by 2020.

According to a white paper issued by the State Council Information Office last month, by the end of 2016, less than 10 percent of Xinjiang’s population lived in poverty.

He also called for better education quality to foster more talents, and stressed the importance of facilitating communication among various ethnic groups to promote ethnic unity.

The Chinese government has been implementing a “pairing assistance” program, which allows other regions of the country to offer financial and personnel support to Xinjiang. [Source]

Experts have also been cited lauding the Chinese government for supporting the region’s development and ensuring its stability. From Leng Shumei at Global Times:

[…] Xiong said that the central government’s support to Xinjiang, as well as its support to Southwest China’s Tibet Autonomous Region, is a vital part of the country’s ethnic policy.

The government has taken full account of their geographical environment, cultures and needs such as infrastructure, Xiong said. [Source]