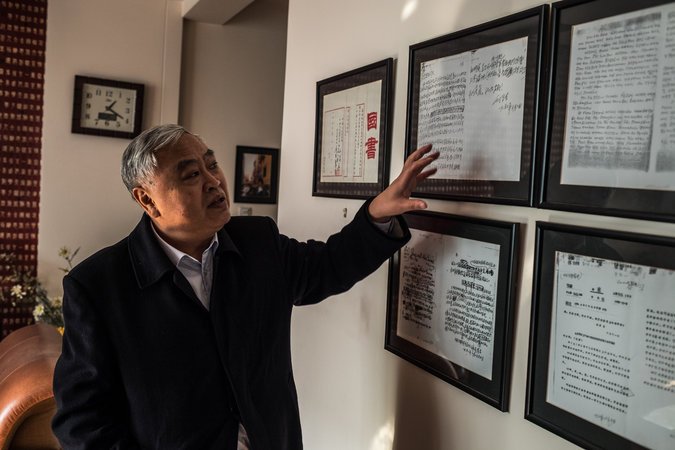 China’s constitution was amended earlier this month after the National People’s Congress voted to abolish the five-year term limits for the presidency and vice-presidency, paving the way for President Xi Jinping to potentially remain in power indefinitely. “Xi Jinping Thought on Socialism with Chinese Characteristics for a New Era” was also formally added to the Constitution as part the amendments. In light of these developments, China File’s Jessica Batke looks at what history has taught the CCP about the need to bind the Party to the state to ensure full control over “the enterprise of ruling”:

[…] Undoing such a crucial succession norm, I thought, was simply too dangerous to a Party that feared the injuries caused when elite leadership opinion cleaves too deeply, as it did in 1989. Yet, maybe Xi and his comrades have not forgotten this lesson—nor the lessons of Mao, which Xi himself must know all too well—but instead have determined other lessons are more germane to the moment.

Perhaps a more relevant lesson right now is the collapse of the Soviet Union. As Arthur Waldron wrote in 2009,

According to the Chinese official narrative, the failure of the Soviet regime to continue is not attributable to a broad systemic phenomenon, but rather to a very specific failure of the Communist Party of the Soviet Union. . . What exactly went wrong in the CPSU? . . . [T]he party ceased to insist that it was the sole ruling party, seeking instead to bring society in as its own ultimate governor . . . Perhaps it is not surprising, then, that party discipline and unity are at the top of the list of issues being stressed publicly in China today, and simple repression is regularly employed as a means of dealing with tensions. . .

[…] These are lessons the Chinese Communist Party had already drawn before the current leadership was in place, but very much presaged the Xi administration’s warning of political dangers such as “constitutionalism, civil society, ‘nihilistic’ views of history, ‘universal values,’ and the promotion of ‘the West’s view of media.’” Certainly the world has since offered up further examples, positive and negative, that the C.C.P. and Xi have taken to heart. How did the failures of ruling parties in Tunisia, Libya, or Egypt contribute to each of their downfalls? What lessons might Putin and Erdogan, or for that matter, Trump, offer to the P.R.C.?

These “lessons learned” all aim to provide the C.C.P. with an answer to the same central question: How does a party prevent itself from becoming ancillary to the enterprise of ruling? It seems the only way to do this is to make the party absolutely essential to the enterprise of ruling. Or: the Party is not necessarily the State, but the State must necessarily be the Party.  [Source]

So was the reform era yet another aberration in China’s history, not unlike the Republican period? One way to approach this question is to imagine modern Chinese history as resembling the double-helix structure of DNA, comprising a strand of openness and one of authoritarianism.

For example, many think of the reform era, especially the 1980s, as a time of pluralistic political discourse and an increasingly vibrant civil society. But it was also defined by adherence to Deng’s “four cardinal principles”: the socialist road; the people’s democratic dictatorship; the leadership of the CPC; and Marxism, Leninism, and Mao Zedong Thought.

Just as Deng presided over China’s reform and opening up, he presided over the Tiananmen Square massacre. Similarly, while the Republican era had its new universities and professions (including lawyers), it also had Chiang Kai-shek’s “White Terror” and the conservative “New Life” movement.

In short, even when the Chinese tapestry featured a reformist weft, it was always woven into an authoritarian warp. In Xi’s “New Era,” it is the authoritarian strand that is dominant. History will tell whether a recessive strand of openness may persist. [Source]

Elsewhere, Shen Zhihua–a Chinese historian who has worked to uncover China’s historical secrets–argues that the party should open its archives and not be fearful of being challenged about its past. From The New York Times’ Jane Perlez:

“The party was popular, but after 1949 the party made a lot of mistakes: land reform, the Cultural Revolution, the Great Leap Forward. People might ask: ‘Since you have made so many mistakes, why are you still in power?’ ”

The party is unnecessarily nervous, he argues. “If you look at Chinese history, none can replace the Communist Party. Most of the elite is in the party. The party shouldn’t worry about being challenged. If I was running the propaganda department, I would say: ‘Those mistakes were made in the past, not now, and we need to learn from our mistakes.’ ”

The party frets so much that Mr. Shen — who possesses a blue-ribbon political pedigree — cannot get access even to documents deemed accessible under a law passed in 1996 that said archives would be open to the public after 30 years. The law has never been followed.

[…] A friend in the bureaucracy once explained the problem, he said: “ ‘You know about the 1996 law,’ ” the friend told him, “ ‘But you don’t know about the 10 no’s. There’s no looking up religion, diplomacy, personal affairs of state leaders.’ I said, ‘What can I look up?’ The person said, ‘Basically nothing.’ ” [Source]