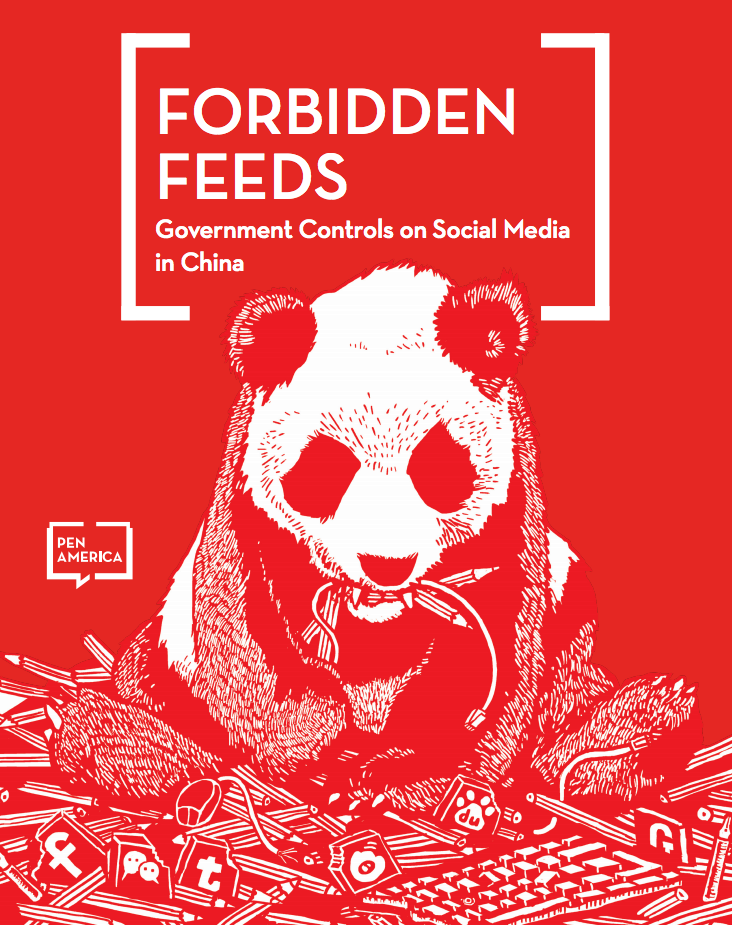 A new report from PEN America, "Forbidden Feeds," examines the steady tightening of control and monitoring of Chinese social media under Xi Jinping. From the report’s Executive Summary:

At a time when people across the world are increasingly concerned about the spread of misinformation online, about cyber-security, and about promoting a healthy and informed online civic discourse, Xi presents “cyber sovereignty” as a reasonable and thoughtful solution, as well as a government’s right. But it is a poison pill, proposing a cure that is far worse than the disease. As Forbidden Feeds will demonstrate, China’s system of online censorship is a broad-scale and daily a ack on free expression. As an Appendix to this report, PEN presents a list of 86 cases of internet users who have been targeted or punished by the government for their online expression.

China’s cyber sovereignty project has brought grave consequences to many, especially writers, activists, and dissidents. Those who dare to test the limits of China’s online censorship can face intimidation, job loss, years-long prison sentences, or find themselves forced into exile. […]

[…] Forbidden Feeds also considers the trade-offs facing foreign social media and technology companies as they consider entry into the Chinese market. PEN America argues that they should choose not to do so, because there is no way for them to operate in China at present without becoming a willing accomplice in widespread human rights violations. [p4] [Source]

Parts of the report focus on two long-running CDT series: the leaked censorship orders published as "Directives from the Ministry of Truth," and the blocked search and post terms from Weibo filed under "Sensitive Words." It also includes a case study on CDT cartoonist Badiucao [p45], who designed its cover.

One of the main ways that regulators provide specific marching orders on censorship to social media companies is with censorship directives, specific memorandums laying out instructions to internet companies and media organization on subjects such as how to handle coverage of certain events or which new words to ban.

[…] From 2002-2015, China Digital Times has published over 2,600 censorship directives from the government and the Communist Party. The actual number of directives, they have concluded, is likely far higher. “We know we only get a tiny fraction of the directives,” Samuel Wade, Deputy Editor of the site, told PEN America. “In September 2015, we got one that was an image and it was labeled directive number 320. Most of the times, the directives are passed on verbally to editors, in part so there’s less of a paper trail.” Wade went on to note that the number “320” only referred to the number of directives from that one censorship agency—the Central Propaganda Department. [p30]

[…] Perhaps the best-analyzed list of forbidden keywords comes from Sina Weibo, the microblogging platform with almost 400 million monthly users that functions much like Twitter. Because Sina Weibo posts are public, it is easier to analyze which words are blocked from the platform. Jason Q. Ng, an internet researcher, developed a censorship testing program in 2011 to evaluate the search engine offered by Sina Weibo, which allows people to search for posts from Weibo users. Ng found that, among the 700,000 words and phrases that he initially tested, over 1,000 words were blocked.

The results of the tracking system are hosted on China Digital Times. Due to technological changes in the way Weibo search functions, the automatic tracking mechanism has not worked since 2015, and CDT editors have manually updated the list since then. The list now contains almost 3500 words that have been added to the blacklist. Many of the words are not ‘blocked’ forever; instead, they are just blocked temporarily during breaking news events and later made accessible again once censors apparently judge that the ‘subversive’ connotations of the words have been forgotten. [p35]

For examples of the two series, see an extensive list of Sensitive Words related to the recent abolition of presidential term limits and an ongoing series of directives guiding coverage of the Two Sessions political meetings currently underway in Beijing. For more on the Directives series, see a recap of last year’s leaks, analysis of those by Freedom House’s Sarah Cook, and a 2013 essay by Perry Link.