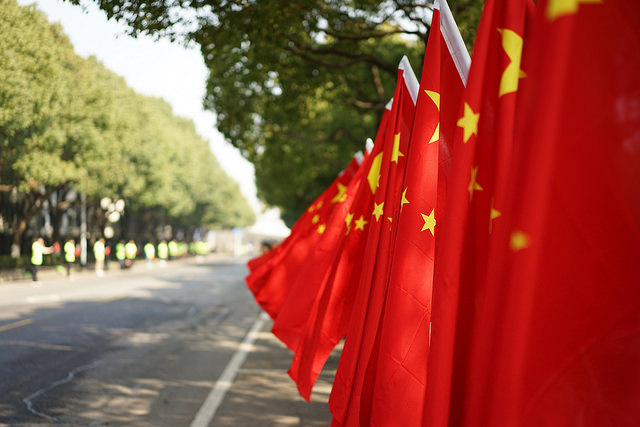 A new proposal put before the National People’s Congress realigns the structure of the Chinese government, consolidating several offices into larger entities that are directly under the State Council, in the most sweeping reforms in two decades. In total, the current 34 ministries and commissions will be reduced and reconfigured into 26 new ones. This year’s session of the NPC has already seen the consolidation of power by Xi Jinping ratified with the elimination of term limits, and this new proposal further strengthens his control over the state as a whole. Xinhua provides a list of all the new entities, and Reuters and the Wall Street Journal summarize the most significant changes:

A look at China’s restructuring of government agencies.

COMBINED: Separate banking and insurance regulators will be merged into a single agency to better fend off risks in the country’s financial system.
SETUP: A national market regulatory administration with sweeping responsibilities will incorporate functions of a half-dozen offices to oversee business competition and practices, from corporate and antitrust regulation to pricing and food safety.
RETOOLED: A National Health Commission, with responsibilities over public health issues, is replacing the National Health and Family Planning Commission, de-emphasizing government-set birth limits and refocusing policy for an aging society.
REVAMPED: A beefed-up environment ministry will add to its environmental-protection mission, taking on antipollution and conservation functions currently spread across six other agencies.
MERGED: Merging the Culture Ministry with the national tourism administration, in a push to develop and promote Chinese culture, and enhance China’s soft power. [Source]

See also this blog post by Yiqin Fu which clearly spells out which existing offices will be folded into the new ministries and commissions.

In the same WSJ article, Chun Han Wong reports on the government’s explanation of the reforms:

A party directive issued last month said the reorganization aimed to “strengthen the Communist Party’s leadership in every sector.” Key to that is eliminating the bureaucratic inertia that Mr. Xi and other senior leaders say has hampered efforts to shift the economy away from wasteful investment toward more sustainable growth and make China a global power.

Among these changes, several are geared toward strengthening control over China’s image and activities overseas. The current National Tourism Administration will be merged with the Ministry of Culture, to form a Ministry of Culture and Tourism, which will be “aimed at coordinating the development of cultural and tourism industries, enhancing the country’s soft power and cultural influence, and promoting cultural exchanges internationally,” according to the official announcement.

Under the proposal, the State Administration of Press, Publication, Radio, Film and Television (SAPPRFT) will be eliminated. It will be replaced by a new regulatory body that operates at the State Council, or cabinet, level.

“The proposed administration directly under the State Council will be responsible for drafting policies and measures for radio and television management and their implementation, coordinating development of broadcasting undertakings and industries, promoting institutional reform in the sectors, importing radio and television programs, and facilitating the sectors to go global,” said China’s state news agency Xinhua. [Source]

It is unclear how the responsibilities of the new body will differ from the SAPPRFT, which was also directly under the State Council, or what would happen to the press, publishing and film portfolio:

Question: According to the State Council reorganization plan, SAPPRFT will be replaced by State General Admin. of Radio and Television, which doesn't appear to have jurisdiction over press and publication. Safe to assume that a CPC department will take up the responsibility?

Another new entity, the International Development Cooperation Agency, will be aimed at improving China’s global image through aid and investment. The agency will consolidate work currently performed by the Ministry of Foreign Affairs and Ministry of Commerce, and also integrate the Belt and Road Initiative, a massive global infrastructure spending effort that was launched last year and has received mixed reviews. From Simon Denyer at the Washington Post:

The move is designed “to give full play to foreign aid as a key means of major-country diplomacy,” enhance its coordination and “better serve the nation’s diplomatic strategy” including the Belt and Road project, State Councilor Wang Yong told parliament.

Li Fan, founder of the World and China Institute think tank, said the new body would be comparable to the U.S. Agency for International Development and Japan’s International Cooperation Agency and, in a similar manner, would serve China’s diplomatic objectives.

“Usually developed countries would have a foreign aid agency like this,” he said. “China is still a developing country, but now it also sees the need to set one up as it grows more economically powerful.” [Source]

China’s foreign assistance outflows, especially to countries in the Middle East, Africa and Latin America, have increased in recent years, and a recent study found that the total amount spent between 2000-2014 almost equaled that of the U.S. But because China is not a member of the OECD, it is allowed to mix commercial financing with aid packages, which has raised concerns among other countries.

Foreigners living in China will also be impacted by the government restructure, as they will now be overseen by a new immigrant management bureau, which will be under the Ministry of Public Security. While few details are available yet about what this bureau will do, some foreigners in China expressed concern that it would impact their ability to live and work in the country.

Obviously limited details with this recent announcement, but figure this means even greater scrutiny of visa compliance, residency registrations, as well as activities online and offline for non-Chinese citizens living and working in China. #北京欢迎你 #newnormal #nopizzaforyou https://t.co/7ehStkIO0f

In what may be a sign of things to come, restaurants in a neighborhood of Beijing were recently ordered not to allow more than ten foreigners inside at once.

Other major initiatives include a new Ministry of Ecological Environment, which will consolidate the work of several agencies working on environmental protection and move the responsibility for climate change policies from the National Development and Reform Commission (NDRC). While this move has generally been received positively by climate activists, some expressed concerns that removing the responsibility from the NDRC might minimize its importance and profile. From Denyer’s article at the Washington Post:

Li Shuo, a senior climate policy expert at Greenpeace East Asia, called the changes a “net positive” for the environment, but warned that moving the climate change policy away from the powerful NDRC into the historically weaker environmental ministry could be a double-edged sword.

“Climate change was the poster child of China’s environmental transition,” he said. “A large part of that was due to the fact that the climate agenda had the blessing of the NDRC. Now it is like a pretty bride marrying into a poorer family.”

Li said the details of how the merger would work were still being awaited, including the size of the climate change team in the new ministry and who would head it, which would provide more clues as to its political clout. [Source]

Labor rights activists have also expressed concern that under the new structural reforms, the State Administration of Work Safety (SAWS) will be merged with a new national Emergency Management Department. From China Labour Bulletin:

The new department, under the State Council, will also absorb the disaster management responsibilities currently under the Ministries of Civil Affairs, Agriculture, Water Resources, Land and Resources, as well the departments responsible for earthquake, drought and flood relief.

The rationale for the new department is to provide an efficient and coordinated response to a broad range of disasters from forest fires to coal mine explosions but it appears to eliminate the role of SAWS in ensuring a safe working environment.

The move seems to confirm the suspicion that, on the issue of work safety, the Chinese government is more concerned with disaster management and control rather than in preventing workplace accidents in the first place. [Source]

With only a brief outline of the new restructuring plan currently available to the public, it is not clear how these changes will be implemented or what their full impact will be. Chris Buckley and Keith Bradsher report for The New York Times:

With the announcements, Mr. Xi is moving to strengthen his authoritarian leadership over the entrenched cadres and vested interests that his allies have blamed for frustrating reforms he promised in 2013, a year after taking power. Mr. Xi has pushed for firmer action to control rising corporate and state debt, and to cut the smog and water pollution that have caused widespread fear and anger about public health.

But there are still many uncertainties about how the government revamp will work in practice, and whether it can actually achieve its goals. Critics have said imposing top-down party control may backfire by deterring officials from acting boldly and creatively to fight pollution and other problems.

“These are good initial steps potentially, but what really matters is where they go from here,” said Andrew Polk, a co-founder in Beijing of Trivium/China, which advises companies. “The fact that there was the political will to push this through, and mothball and combine some entities, says a lot. But now the execution becomes key, and that hasn’t always been effective.” [Source]

The National People’s Congress is slated to vote on the new government restructuring plan in the coming week.

*Editor’s Note: The translation of the new 国家广播电视总局 has been corrected above.