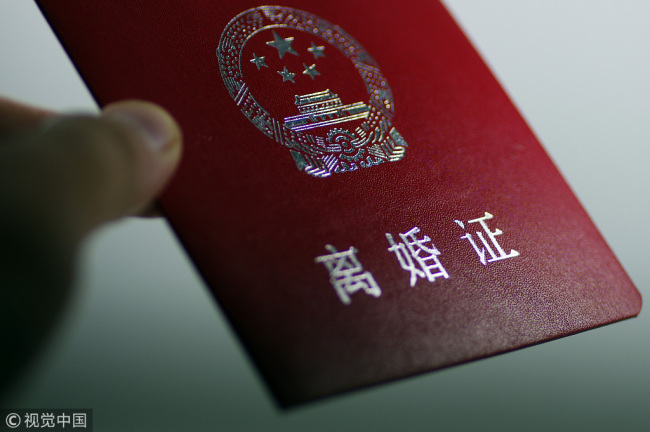 Over the past decade, China’s “crude divorce rate,” the number of divorces per 1,000 people occurring each year, has doubled from 1.5 to 3, as women—who file over 70% of divorce disputes, and over 90% of spousal abuse claims—have become more financially independent. In an effort to “actively defuse” what English-language state media has called a “marriage crisis,” Xi Jinping has been stressing “socialist family values” in which families are the “cells of society,” and China’s courts have begun to erect legislative hurdles to divorce. China’s Supreme People’s Court in 2016 urged lower courts to begin testing the viability of a marriage early in a divorce dispute, and Jiangsu Province instituted a “divorce test” to do so. Other local courts have implemented “cooling-off” periods for couples in domestic turbulence before they can officially dissolve their marriage.

This month, the Higher People’s Court of Guangdong released a directive specifying the conditions of a “cooling-off” period. CDT has translated the announcement as described by the court’s official Weibo:

On July 16, the Higher People’s Court of Guangdong Province issued the “Guangdong Court Procedural Guide to Adjudicating Divorce Cases.” Since early 2010, the Guangdong court system has taken the national lead in launching reform of family matter adjudication, persistently addressing these problems, pushing forward untiringly, prioritizing exploration of personal safety protections and their related judicial rulings, divorce certificates, divorce cooling-off periods, child-rearing plans, divorce asset declarations, and a diverse series of innovations regarding settlement of divorce disputes. The text of the “Guide” is divided into six parts, comprising 47 items, and about 10,000 characters. Relying on many reform practices, it puts forward an innovative system at the nation’s forefront. * Guangdong High Court’s first release of a procedural guide to adjudicating divorce cases. [Chinese]

In a post on Weibo, lawyer Wu Jiezhen described the stipulations in detail, and noted that Deng Yingchao, the onetime vice-chair of the All-China Democratic Women’s Federation and the wife of China’s first premier Zhou Enlai, would “rise from her grave in annoyance” at the apparent aim of the directive. CDT has translated Wu’s post, and a historical note that it contained on the 1950 Marriage Law of the PRC’s aim to safeguard women’s “freedom to divorce,” as explained by Deng Yingchao:

YujianWuJiezhen (@遇见吴杰臻)：Guangdong Province’s Higher People’s Court today issued the “Procedural Guide to Adjudicating Divorce Cases.” With comprehensive implementation of the divorce cooling-off period, the mood restraint period, and the emotional attachment restoration period, divorce is getting more and more difficult. The court treats the partners in a messy divorce like big babies, like barely grown infants. The court is like “a mother worried when her child is far from home.” This “parental” behavior is cause enough for depression… The Venerable Madam Deng Yingchao, if she had awareness in the afterlife, would rise from the grave in annoyance.

The following are the divorce cooling-off period stipulations:

The People’s Court, when adjudicating a divorce case, in order to spur the parties involved to restrain their emotions and litigate rationally, or help the parties involved restore emotional attachment and safeguard the marriage, may establish a fixed time allotment for a cooling-off period.

If the parties involved, during the cooling-off period, reconcile and reach an agreement, they may apply to drop the case, or apply to the People’s Court for confirmation.

During the course of the court hearings, the parties involved may experience excessive agitation or mood disturbance, and be unable to rationally convey ideas. If the People’s Court believes continuing the hearing would cause a marked intensification of the problem, it can opt to establish a mood restraint cooling-off period.

The allotted time of the mood restraint cooling-off period established by the People’s Court shall not exceed 20 days. After the allotted time is over, the court hearings should continue.

During the mood restraint cooling-off period, the People’s Court may advise and persuade the parties involved, or invite specialists to conduct psychological interventions and provide persuasive guidance.

If one of the parties requesting divorce is temporarily unwilling to accept mediation, and the other party involved clearly promises to take the initiative to restore emotional attachment, and the People’s Court believes the couple really could become reconciled, the court may decide to establish an emotional attachment restoration cooling-off period.

During the emotional attachment restoration cooling-off period, the People’s Court should, with return visits, supervise and encourage the parties involved, to make sure they are keeping their promise to conduct a restoration of emotional attachment. After the parties involved apply, the People’s Court may invite pertinent organizations or individuals to undertake assistance work.

The People’s Court may invite pertinent organizations and individuals to help the parties involved with family relations and uniting in wedlock, to determine the root causes of disputes, to perform psychological testing and evaluation, and based on the conclusions from that work, formulate a viable emotional attachment restoration plan.

[Historical note, included as a screenshot in Wu’s post:]

In 1931 “The Chinese Soviet Republic Marriage Regulations” were issued. The 9th provision: To ensure divorce freedom, in the case of a commonplace male-female bilateral agreement to divorce, proceed with divorce. If one of the parties firmly requests divorce, proceed with divorce. Shouldn’t we enter this provision into the new marriage law? The opposition believes that in rural areas, divorce freedom would surely harm peasants’ personal interests to some degree. They certainly would become an opposition faction. Besides this type of apprehension, the situation at that time was developing fast. Many were soon to move to big cities. It was feared that some government employees, using “divorce freedom” as a pretext, would abandon their rural first wives.

In 1950, in the beginning of January, during further discussion of the “Marriage Law” rough draft by the All-China Women’s Federation, Deng Yingchao said: “No one disputes marriage freedom in principle. Regarding divorce freedom, there is also basically no dispute, in principle. But when it comes to the notion that if ‘one party insists on divorce, the divorce should proceed,’ we have dissenting views. In the joint symposium of politics and law, young people, and women, only I and one comrade from the Organization Department of the CCP agree that one party’s insistence should cause a divorce to proceed. The other comrades all advocate for conditions on divorce.” Deng Yingchao also said, “Why do I advocate for divorce based on one party’s insistence? Because China stagnated in feudal society for a long time, and women were the most oppressed. When it comes to marriage issues, women suffer the most. Marrying too early, the old marrying the young, mercenary marriage, and arranged marriages, all are widespread phenomena. So, divorce based on one party’s insistence would be of widespread benefit to women. If we put many conditions on divorce, that would be nothing more than a pretext for feudal-thinking government employees to control and restrict divorce freedom. We didn’t have a provision for divorce freedom in the past, and many tragedies occurred.” [Chinese]