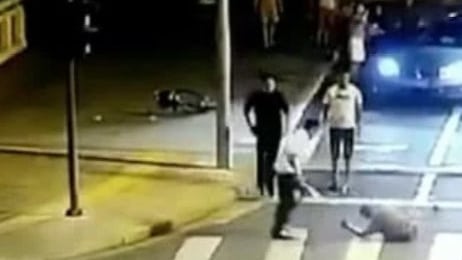 Last weekend, Kunshan police issued a formal statement regarding the death of Liu Hailong, who got into a fight with a cyclist after his BMW veered into a bike lane. Liu attacked the cyclist, Yu Haiming, with a machete, but Yu managed to grab the weapon and fight back. Liu bled to death soon after. South China Morning Post’s Frank Tang reported on the police finding that Yu had acted in self-defense:

But courts have overwhelmingly found against defendants like Yu in the past. In 100 similar cases published on China Judgments Online, judges found self-defence was justified in only four instances, provincial prosecutors said in an online post that was later removed. In 20 cases, the judges ruled that the defendants had gone too far in defending themselves. The remaining cases were dismissed outright as not self-defence.

Professor Qu Xinjiu, from China University of Political Science and Law, told state broadcaster CCTV that a verdict of self-defence had been very narrowly applied in the past but Yu’s case would encourage broader acceptance of it among the judiciary and prosecutors.

[…] State-run media came out in favour of the police investigation, describing it as “a victory for the rule of law”.

“The value of the law is to be independent of public sentiment … and make rational and just conclusions,” a commentary from official news agency Xinhua said. [Source]

An editorial from China Daily echoed this conclusion:

In each of the steps, the local police and procuratorate strictly followed the law. They never sought to please public opinion.

Actually, the more attention the case received, the more cautious the police and procuratorate will be. It is wrong to believe the police will bend the law to suit public sentiment. Thus it is more proper to call the Kunshan case a victory for the rule of law which aligned with public demand for public order. The judiciary has interacted positively with the public, while the law has been strictly upheld.

It is also "a victory" because the local police and procuratorate have communicated the findings of their investigation and the reasoning behind their decision. They have also clearly explained which legal clauses apply to the case, and also made clear the background information of the persons involved, thus preventing rumors from spreading.

According to the law, the police and procuratorate are responsible for not only enforcing the law, but also enhancing sense of rule of law among the public. They have honored both duties in this case.

We hope the judiciary will be equally strict in following the law when dealing with other cases that do not have such strong attention from society. [Source]

What’s On Weibo reported on the online reaction:

The statement was published on the official Weibo account of the Kunshan police (@昆山公安), and received over 77,000 shares within an hour.

On Weibo, netizens are happy about the news; the majority of people sided with the cyclist, a 41-year-old hotel worker by the name of Yu Haiming (于海明). Some people even organized crowd-funding campaigns to help pay for his legal costs, and the past week has seen a flood of memes about the incident in support of the cyclist.

[…] Besides being happy about the ruling, many netizens also praise the Kunshan police for their work. “I’ve never seen such a detailed police report, thumbs up for Kunshan police!”, some commenters write.

“It’s a good thing we have surveillance cameras nowadays,” another person says: “Ten years ago, he might have been held responsible.”

Others write: “Wonderful news, justice has prevailed! This restores some faith among the common people.” [Source]

Yale’s Jeremy Daum, however, suggested that it was not justice that had prevailed, describing the case as one of “public opinion forcing the hand of adjudicators.” He compared the it with that of Deng Yujiao, a waitress who killed an official who tried to rape her in 2009, and was similarly released after a sympathetic online outcry. George Washington University’s Donald Clarke agreed:

And like the Deng case, it confirms that the function of the legal system is to produce not justice or rule-compliance but rather "stability". (I deliberately put it in quotes because it's the government's conception of what produces stability, not necessarily mine.)

Similar suspicions have arisen repeatedly over the years, such as in the cases of Yang Zhong, a then-teenager released from detention under new anti-rumor laws in 2013, and of Yu Huan, whose life sentence for killing a loan shark who had harassed his mother was reduced in to five years in 2017, both after public outcries. The same concerns have also arisen around environmental and other protests. In 2011, South China Normal University’s Tang Hao lamented at chinadialogue that:

On environmental issues, “interaction without rules” normally goes through three stages: first, local interest groups and local governments push ahead with a polluting project in violation of environmental regulations. Second, local people spontaneously organise mass protests against the project in question, an activity supported by neither law nor policy. And third, in response to the threat to social stability created by the protests, local government halts the project – again, breaching laws. At every stage, the existing rules are lightly cast aside by all participants. [Source]