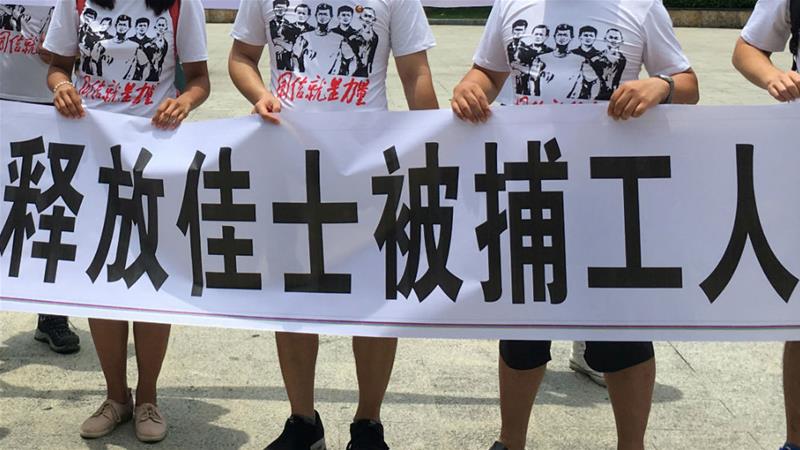 At least ten Chinese labor activists across several cities were detained over the weekend in what some believe to be coordinated raids. Several of the activists were physically assaulted and forced into vehicles before they were taken away. The majority of those targeted in the crackdown are university students and recent graduates who campaigned for workers’ rights. Pak Yiu and Eva Xiao at AFP report:

Five were graduates of Peking University — one of the country’s top-ranked institutions.

One of the graduates, Zhang Shengye, was “kidnapped” on the school campus, the group alleged in its statement.

An eyewitness and Peking University student claimed that more than ten people in dark-coloured clothing beat Zhang before dragging him into a black car.

“They hit him hard and quickly got Zhang under control,” he told AFP, requesting anonymity.

A few other students who were passing by were also beaten, he added. They were forced to the ground, and stopped from taking photos or speaking. [Source]

The detentions are the latest effort by the state to crackdown on rising labor activism at elite universities across China. Many student activists were detained in August for supporting factory workers trying to unionize at Jasic International in Shenzhen. Those taken away included Peking University graduate Yue Xin, a leading activist in China’s #MeToo movement, who has not been heard from since the roundup. Administrators at Renmin University punished some student participants by putting them on blacklists, according to a censored WeChat essay translated by CDT last month. The move triggered Cornell University to terminate two exchange programs with Renmin University in an act of protest.

Sue-Lin Wong at Reuters has more on the most recent wave of arrests:

Authorities took away at least nine activists in Beijing, Shanghai, Guangzhou and Shenzhen late on Friday, and three more activists were taken away on Sunday in the city of Wuhan, the sources said.

[…] “I think the authorities have decided now is the right time to settle the score,” one student activist at a university in Beijing said.

“The authorities want to shut down the Jasic Workers Support Group in one fell swoop. Why else would they suddenly conduct raids of such a large scale and arrest so many people at once?” the student added, speaking on condition of anonymity.

[…] A Peking University spokesman confirmed that someone had been detained but said the incident did not involve teachers or students.

Growing student participation in China’s labor movement has set off an alarm for Beijing as it reminds some of the Tiananmen Square demonstrations. From Emily Feng at Financial Times:

“Students at elite universities are always going to be an issue of concern to the authorities. Think back to 1989; it was students marching at universities who were most active in the [Tiananmen Square] protests,” said Geoffrey Crothall of China Labour Bulletin, a Hong Kong-based campaign group. “The authorities are clearly very concerned that this thing will continue to spread.” [Source]

Benjamin Haas at The Guardian writes that the attack on student-led labor activism has put the Party in a difficult position because the detained student activists are self-identified communists inspired by Marxist principles as preached by the Party itself.

The activists have presented a unique problem for China’s ruling Communist party. They describe themselves as fervent Marxists and Maoists, supporting workers’ rights as an extension of their communist ideals. Marxist classes are required for all Chinese university students and president Xi Jinping said Karl Marx was “totally correct” in a speech marking the 200th anniversary of the philosopher’s birth.

But amid a rise in student protestors hailing from the country’s top universities, authorities have worked to stifle their message of establishing unions and protecting employee rights. Independent unions in China are banned and all unions must register with the All-China Federation of Trade Unions, a government-affiliated group that usually sides with factory management.

“It’s ironic to see how the students who have been studying and believing in Marxism are rounded up by the Chinese authorities for supporting workers, the fundamental value of Marxism,” said Patrick Poon, a researcher at Amnesty International in Hong Kong. “The students are simply exercising their their freedom of expression and showing their solidarity to the workers. They should be immediately released.” [Source]

The ongoing crackdown is a reflection of the Party’s desire to maintain control, which has in many ways backfired and prompted the movement to persist. From The New York Times’ Javier C. Hernández:

The protesters had hoped that the party might tolerate their calls for social justice if they embraced leftist ideals and Mr. Xi. The government has encouraged the study of Marx, Mao and Lenin, and the Communist Party has long had a reputation as a defender of the working class.

But the party has moved quickly to stop the movement from spreading, seemingly worried that the protests might threaten its hold on civil society.

Geoffrey Crothall, the communications director of China Labor Bulletin, a Hong Kong advocacy group, said that Chinese leaders were “digging an even bigger hole for themselves” by continuing to harass the activists. He said the outcry could have been avoided if the authorities had listened to the workers in Huizhou.

“There would have been no protests, no arrests and no acts of nationwide solidarity from students and Maoist groups across the country,” Mr. Crothall said. [Source]