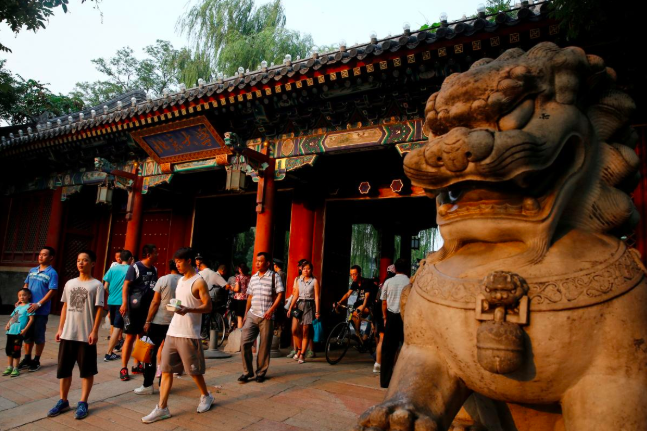 A group of Peking University graduates has signed a public letter this week decrying the mistreatment of their fellow alumni, who were detained this past weekend as part of what appeared to be a coordinated raid on labor activists in several cities across the country. The raid is the latest effort by the government to suppress the rise of labor activism. Student activists from several elite universities were detained in August for supporting factory workers trying to unionize at Shenzhen’s Jasic International, a welding equipment manufacturer. Students and alumni at Peking University have formed a concern group to rally for the missing activists’ freedom. University administrators are warning students to distance themselves from the labor movement or face potential arrest and other consequences. Mimi Lau at Inkstone reports:

The incident sparked a flurry of activity from a group of students, who call themselves a “concern group for missing Peking university graduates”, and handed out information about the abduction and other missing students in a university cafeteria on Sunday.

On Monday and Tuesday, students who had spoken out or supported the labor rights movement were warned by teachers, their parents and what appeared to be plainclothes policemen, according to one of the students, who declined to be named.

“Many students were told the weekend incident was a law enforcement action by relevant departments targeting [suspects] of illegal activities,” a Peking University student close to the activist schoolmates said.

[…] “They also warned students against taking further radical actions as the university would no longer tolerate them. Further moves will be dealt with by law.

“We will not rest until the university can explain what constitutes the radical actions and illegal activities our alumni are accused of.” [Source]

The university’s response follows a pattern of tightening control on campus as the school administration moves to rein in student activism, writes Christian Shepard at Reuters:

Late on Wednesday, the university, informally known as Beida, warned all students against taking part in demonstrations of support for recent labor-rights activism involving former students and said they would be held responsible if they “challenged the law”.

“The school believes that the majority of students are sensible, but if there are those near you who are spreading rumors or reactionary sentiments, regardless if they are your teacher or your friend or your schoolmate, please keep a firm stance,” students were told over instant messaging platforms.

On Tuesday, the Communist Party committee at Beida set up new bodies responsible for disciplinary inspection tours and campus “control and management”, according to a document released by the committee and seen by Reuters, moves that tighten enforcement of party discipline.

The committee also held a meeting for all campus members and told them that a recent graduate who was among those missing following weekend labor protests was working with an illegal organization, a source briefed on the meeting told Reuters. [Source]

Journalist and scholar Leta Hong Fincher has launched a petition calling for the release of the kidnapped students and workers.

Sun Min is just one of the student and worker activists kidnapped recently, featured in this petition calling for their release. pic.twitter.com/dU7cNA7Sx3

At Foreign Policy, Cornell University’s Eli Friedman, who oversaw the termination of Cornell’s exchange programs with Renmin University over their treatment of student activists and related questions around academic freedom, is calling on other foreign institutions to re-evaluate their relationship with Chinese universities.

[…] How should foreign universities respond? There is little we can do to directly counter the source of the problem, growing state repression under President Xi Jinping. But academics worldwide should think carefully about reassessing our points of contact with Chinese universities.

The first step is to squarely face the reality that things on Chinese campuses have become markedly worse in the past five years. As well as the political crackdowns on domestic scholars, foreign researchers are frequently denied visas and have their research projects derailed; they are also subject to intense scrutiny and surveillance. Restrictions on academic freedom are not new, but they have intensified.

[…] I am not advocating across-the-board disengagement. Many partnerships between Chinese and foreign universities continue to yield important mutual benefits, including at Cornell. Particularly at a time of rising xenophobia and nationalism in China, the United States, and elsewhere, it is critically important to remain open to free flows of students, scholars, and ideas. Foreign institutions and governments must not try to mimic the Chinese state’s increasingly onerous restrictions on who can study what, and where.

Nonetheless, substantive, mutually beneficial exchanges must be built on a foundation of shared values. When those values are repeatedly and egregiously violated, as has been the case at a growing number of Chinese universities, scholars and politicians must think seriously about moving beyond the quiet diplomacy model. This is a matter not just of principle, but of ensuring academic quality and therefore the reputations of our universities. [Source]