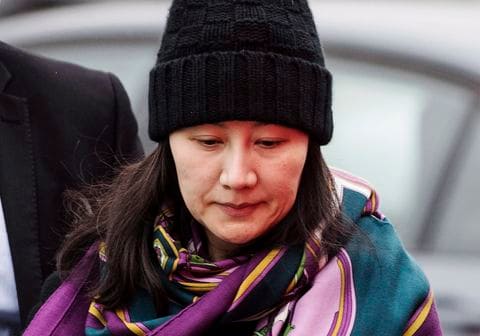 The U.S. Justice Department has announced criminal charges against Huawei Technologies, two affiliate companies, and Huawei CFO Meng Wanzhou on allegations of bank and wire fraud.  An additional 10 charges of wire fraud, trade theft, and obstruction of justice have also been filed by the DOJ against two other Huawei executives alleged to have conspired to steal trade secrets from U.S. firm T-Mobile. Also on Monday, U.S. officials formally requested the extradition of Meng, a move that has been expected. At The Washington Post, Ellen Nakashima and Devlin Barrett report:

A 13-count indictment filed in New York City against Huawei, two affiliates and its chief financial officer, Meng Wanzhou, details allegations of bank and wire fraud. The company also is charged with violating U.S. sanctions on Iran and conspiring to obstruct justice related to the investigation.

[…] On Monday evening, the Canadian Justice Department confirmed it had received a formal request for Meng’s extradition from the United States to stand trial. The request comes even as Beijing has pressured Canada to release Meng.

[…] “The criminal activity in this indictment goes back 10 years and goes all the way to the top of the company,” [acting attorney general Matthew] Whitaker said.

[FBI Director Christopher] Wray said firms like Huawei “pose a dual threat to both our economic and national security, and the magnitude of these charges make clear just how seriously the FBI takes this threat.” [Source]

If found guilty on all counts, Meng Wanzhou could face up to a 30-year sentence. Meng was arrested in Vancouver by Canadian officials answering to a U.S. extradition warrant on December 1, which appears to have led to diplomatic retaliation by Beijing: several Canadians were detained in the immediate aftermath, and one sentenced to death in an shockingly speedy retrial of an earlier 15-year sentence for drug smuggling. Over 100 scholars and former diplomats from around the world recently signed an open letter to President Xi expressing concern over the chilling effect China’s actions have had on their respective disciplines. More recently, Canadian Prime Minister Justin Trudeau forced the resignation of former ambassador to China John McCallum after he last week made comments that could be viewed as supportive of Beijing’s claim that Meng’s arrest was politically motivated. Other former ambassadors and experts expressed concerns that McCallum had fallen victim to Beijing’s “influence campaign,” according to a report in The Star Vancouver. In regards to Meng’s case, Canada’s Justice Minister has 30 days from the U.S.’ formal extradition request to make a decision on whether to proceed.

At Reuters, Diae Bartz, Sarah N. Lynch, and Sijia Jiang report on responses to the charges from Meng’s lawyer Reid Weingarten, Huawei, and from Beijing:

“Our client, Sabrina Meng, should not be a pawn or a hostage in this relationship. Ms. Meng is an ethical and honorable businesswoman who has never spent a second of her life plotting to violate any U.S. law, including the Iranian sanctions.”

Huawei said it had sought to discuss the charges with U.S. authorities “but the request was rejected without explanation”.

It said it “denies that it or its subsidiary or affiliate have committed any of the asserted violations” and “is not aware of any wrongdoing by Ms. Meng.”

The U.S.’ formal announcement of charges against Huawei and affiliates, Meng, and the other executives came as top Chinese officials were landing in the U.S. for critical U.S.-China trade talks set to begin this week amid an ongoing trade dispute between the two nations. At The Washington Post, Gerry Shih, Anna Fifield, and David J. Lynch report on how the charges could complicate the talks:

Negotiators this week are hoping to reach an accord that could at least avert a new 25 percent levy on $200 billion worth of Chinese goods — tariffs that Trump has ordered to begin March 2, absent a deal.

“I’m not saying that there will be an ugly showdown between the two countries at the end of the talks, but it could be a dormant volcano that becomes active every few months and adds uncertainty to the global trade and economy,” Zhang Yansheng, secretary general of the academic committee at the National Development and Reform Commission, China’s powerful economic planning body, told reporters Tuesday.

Although China has offered significant purchases of U.S. exports to close the trade deficit and promised to crack down on intellectual property theft — issues underscored by the American indictment against Huawei — it has not yet offered an acceptable mechanism that would let the United States hold it accountable for those promises, according to scholars and trade group representatives who have spoken to U.S. negotiators.

[…] Lester Ross, a long-standing member of the American Chamber of Commerce in Beijing and head of law firm Wilmer Hale’s practice in the city, said the Chinese leadership wants to go through with this week’s negotiations and seek a deal at a time when its economic engine is sputtering.

“The Chinese seem determined to carry on with the trade track despite the discomfort of the Huawei case,” Ross said. […] [Source]

The Guardian cites staff reporters and agencies to report that Meng Wanzhou had her first court hearing in British Columbia, Canada yesterday:

The chief financial officer of Huawei, Meng Wanzhou, has made her first appearance in a Canadian court in more than a month, part of a high-stakes dispute that threatens to cast a pall over this week’s US-China trade talks.

[…] The case will continue to linger throughout negotiations. Canada now has a month to decide whether the US’s formal extradition request is strong enough, and during Tuesday’s hearing, Justice William Ehrcke delayed the next hearing by a month, to 6 March.

[…] In Ottowa on Tuesday, justice minister David Lametti confirmed the US had filed a formal extradition request with his department.

Lametti, asked whether a decision could come sooner than the 30-day limit, said officials “will take the time that they need to make an enlightened decision based on the evidence in front of them”. [Source]