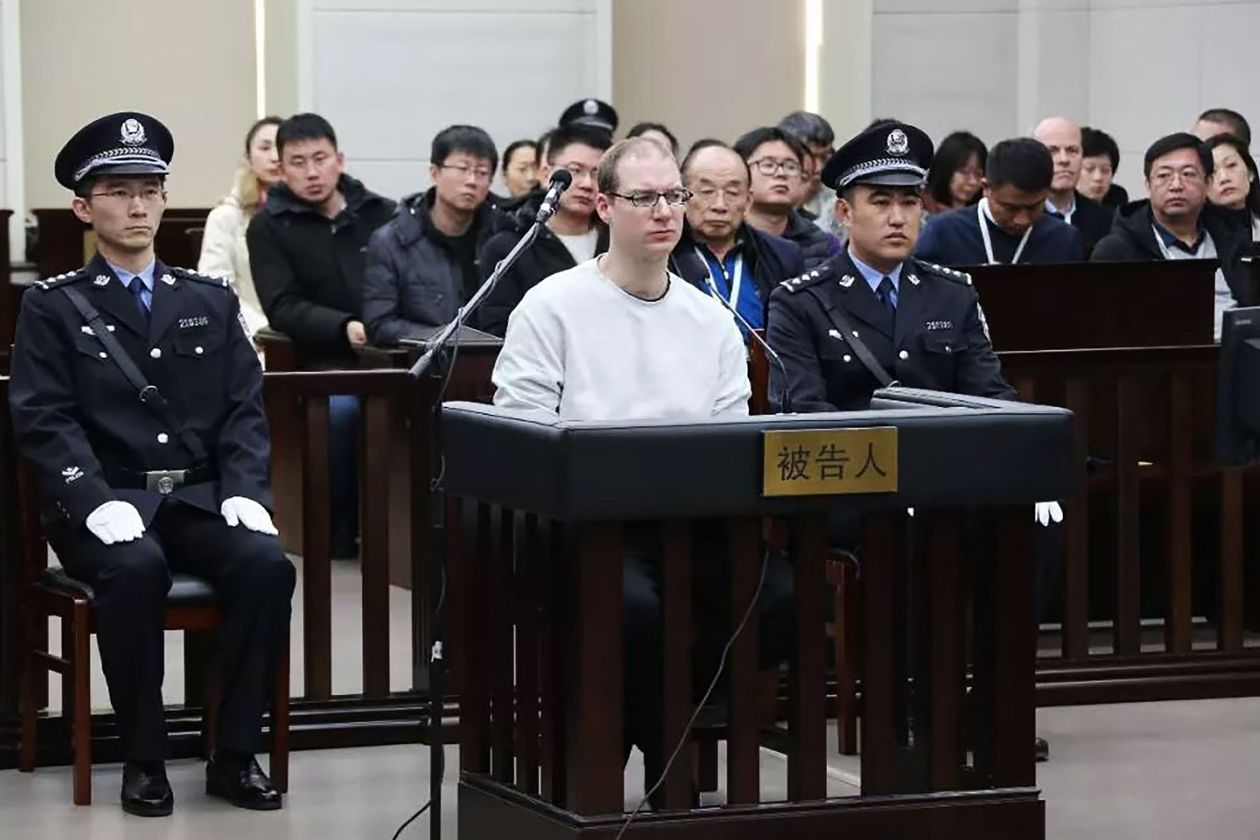 The Dalian Intermediate People’s Court in Liaoning province sentenced Canadian Robert Lloyd Schellenberg to death on Monday during a one-day retrial on drug smuggling charges. Schellenberg has been detained in China since 2014. His trial began in 2016 and he was sentenced to 15 years in prison on November 20th of last year. He was given a public hearing in December after lodging an appeal against the conviction. The Liaoning High Court ordered the case retried in late December after prosecutors said the sentence was too light. The decision is expected to further deepen diplomatic tensions between Beijing and Ottawa over the arrest of Huawei CFO Meng Wanzhou and the subsequent arbitrary detention of Canadian nationals Michael Kovrig and Michael Spavor, who are held in China on suspicion of endangering state security. Chris Buckley at The New York Times reports:

“The evidence is compelling and ample, and the criminal charges are well founded,” the Dalian Intermediate People’s Court said of Mr. Schellenberg’s death sentence, according to an official account published online. “Schellenberg was a principal culprit.”

[…] At the trial on Monday, the prosecutors and judges laid out an account of a failed drug-smuggling operation starkly at odds with Mr. Schellenberg’s testimony.

He had told the court that he was a “tourist visiting China and framed by criminals,” China’s central television broadcaster said in an online report.

But the court saw Mr. Schellenberg as a skilled participant in the smuggling scheme, which involved trying to ship nearly 500 pounds of methamphetamines to Australia in pellets stuffed inside tires.

The court report said Mr. Schellenberg had assessed the equipment for the planned crime — including tires, tubes and containers — and suggested delaying the drug shipment to allow for more preparation. [Source]

Prosecutors summoned a witness named Xu Qing to testify against the Canadian, using it as evidence to accuse Schellenberg of playing a key role in the drug-smuggling network. Schellenberg has maintained his innocence throughout and said he was made an unsuspecting participant by Xu. From Eva Dou at The Wall Street Journal:

Mr. Xu’s testimony Monday was his first appearance in any of the proceedings for Mr. Schellenberg since the latter’s arrest four years ago, and the prosecutors’ case hinged on it.

In their testimonies, Messrs. Schellenberg and Xu agreed that they went together to buy industrial tools, which each denied knowing were for drug-repackaging, along with tires and to visit the warehouse. Both said they didn’t know that methamphetamines hidden inside bags of plastic pellets were stored at the warehouse. Each claimed he went along because the other asked him to. Each said the other was working under the direction of a man named Khamla Wong, who was arrested in Thailand in 2016 for alleged drug smuggling.

[…] Under Chinese law, a defendant cannot receive a heavier sentence upon appeal, unless the prosecution brings new charges, according to legal experts. Prosecutors on Monday changed their original charge that Mr. Schellenberg was an accessory to drug smuggling and instead charged him with having been a key participant in an international smuggling ring.

The most concrete new evidence submitted to try to prove his membership in an international smuggling ring was a log of a phone call placed from his phone to a person, Mai Qingxiang, who was later convicted of drug smuggling. Mr. Schellenberg, who doesn’t speak Chinese, said that he didn’t know Mr. Mai and that the call was made by Mr. Xu, borrowing his phone. [Source]

Canadian Prime Minister Justin Trudeau accused China of “arbitrarily” applying the death penalty, saying that the sentence was of “extreme concern” to the government and vowing that his administration would “intercede” in Schellenberg’s case. Sarah Zheng at South China Morning Post reports:

In Ottawa, Trudeau said: “It is of extreme concern to us as a government, as it should be to all our international friends and allies, that China has chosen to begin to arbitrarily apply’’ the death penalty.

He said his government had vowed to intercede whenever a Canadian faced the death penalty, “as we have in this case”.

Trudeau said China had taken a “choice not to respect long-standing practices and principles in regards to diplomatic immunity”, an apparent reference to Kovrig’s status.[Source]

Here is the full quote from Trudeau: “It is of extreme concern to us as a govt—as it should be to all our intl friends and allies—that China has chosen to begin to arbitrarily apply a death penalty” https://t.co/lLjO1nEGI4

Legal experts have called the hasty retrial an attempt by China to gain leverage over Canada and put pressure on the Canadian government over the arrest of Meng Wanzhou. Schellenberg’s family had also voiced fears before the retrial that Schellenberg would become a bargaining chip for Beijing. From AFP:

Court retrials were rare, said Donald Clarke, a professor at George Washington University specialising in Chinese law, and even rarer were retrials calling for a harsher sentence.

“It is obvious … that Schellenberg’s fate will have little to do with his actual guilt or innocence,” Clarke said.

“If the Chinese government has an innocent explanation for all the unusual features of this case, I hope it will provide it – otherwise, I don’t know how to understand this case other than as a simple threat.” [Source]

At Lawfare, Donald Clarke goes into greater depth on his take on the Schellenberg case and how there are “several unusual features” that point to its connection with Meng Wanzhou’s extradition.

1. Extraordinary delay in trial and sentencing. The original trial was on March 15, 2016. Given that Schellenberg was detained more than a year earlier, on Dec. 3, 2014, that already represents an unusual delay in China’s usually speedy criminal procedure system.[…]

[…] 2. The decision to send back for retrial. The outcome of the appeal (announced after only twenty minutes of deliberations, suggesting that it was decided in advance) is very unusual. The court, instead of deciding the appeal one way or the other by itself, sent the case back down to the original trial court for a re-trial (chongshen 重审). […]

[…] 3. Extraordinary speed in scheduling the retrial. Schellenberg’s retrial has been scheduled for Jan. 14, a mere 16 days after the appeal decision. This is barely time for the minimum 10 days’ notice of trial required by China’s Criminal Procedure Law (Art. 187), and it is not clear that notice was in fact provided on or before Jan. 4 as required.[…]

The appeal (上诉) process has time limits. But there are no time limits on Supreme People’s Court review (复核). Thus, it’s at the SPC review stage that the government can drag the process out indefinitely while negotiating over whether they will kill S or not.

As Don noted, first there would be the standard appeal, and then (presuming that the sentence is upheld on appeal), a final review by the SPC (just sent separate reply with relevant provision in the CPL)

Lewis told CTV News on Monday that from this point on, through the appeal, Supreme People’s Court review, and possible execution, “the timing is really whatever Beijing wants it to be. The Chinese government is in the driver’s seat.”

My thoughts this evening on @CTVNews regarding #China's decision to sentence Canadian-citizen #Schellenberg to the death penalty:https://t.co/j8ZoTo4Ri2

Canada’s former ambassador to China Guy Saint-Jacques also questioned the speed of the retrial and the Chinese government’s enthusiasm to publicize the case, calling the proceeding an “orchestrated” event. From Reuters:

Former Canadian ambassador to China Guy Saint-Jacques said the fact that Schellenberg’s re-trial was organized so quickly, against a backdrop of heightened tensions with Canada, makes him believe the death sentence was predetermined.

“I think it shows clearly that they wanted to apply the rules maybe with more zeal than they would have otherwise,” he said.

“The other thing that I think has to be noticed is the fact that they invited foreign journalists to attend the trial. They claimed that it’s for transparency purposes. Well, if that is the case, they could have started doing that years ago.

“I think all this was orchestrated.”  [Source]

At The Globe and Mail, the University of Toronto’s Lynette Ong argued that Beijing is making life harder for those in Canada who favor engagement with China:

Now that the worst-case scenario for Mr. Schellenberg has come to pass, it is hard to see this judicial decision as independent of politics, even though there is no hard evidence to suggest the Chinese court was under any instruction to hand him a harsher sentence. But it should be noted that in China’s Communist system, the court is not independent of the Party or the government.

Where does this leave us? As I have argued in Foreign Policy, China is being very short-sighted with its retaliatory actions. There is no doubt that China has developed tremendous economic power, technological prowess and military might over the last few decades. Under President Xi Jinping, China has demonstrated no qualms about showing the world what it is capable of doing. But is it in China’s long-term interest to showcase its raw power so crudely?

[…] China is a growing superpower that Canada can ill-afford to ignore in geopolitics, especially as Canada works to balance and even hedge against its relationship with the United States, which is experiencing the erosion of its own democratic institutions. Yet China’s behaviour of late has made it so much more difficult for those who believe in engaging China and who have been defending China on issues other than human rights. [Source]

How badly does China want coverage of the Schellenberg trial? I’m in Dalian, in a bus taking us to an offsite viewing room. An official said we couldn’t leave yet because “some US and British journalists signed up but haven’t arrived yet.”

i was told more than a week before the news Schellenberg was to be retried that the authorities were planning to sentence a canadian drug trafficker to death…this whole thing was fixed to interfere in Canada’s internal judicial process and threaten Canada to get Meng back https://t.co/2NGyugaGV2

If there was any question as to the relationship between Huawei and the Communist Party of China before, today’s hastily arranged death sentence for Canadian Robert Schellenberg in Dalian is confirmation it is a close and crucial one.

In the cases I’ve covered, lawyers have a basic strategy, have a line of questioning and would ask witnesses the same qn in 20 different ways.

But in today’s encounter, trying to set out one’s case merited a scolding. As did repeating questions.

Also, the prosecution came prepared with PowerPoint slides of evidence. Text message extracts, pictures of the drugs, a graph showing the links in the syndicate.

These were helpfully flashed on 2 TV screens. PowerPoint slides!

Trudeau said last week that Chinese officials were not respecting the diplomatic immunity of Michael Kovrig.

[…] However, Chinese Foreign Ministry spokeswoman Hua Chunying told reporters Monday that Kovrig is no longer a diplomat and entered China on an ordinary passport and business visa.

“According to the Vienna Convention of Diplomatic Relations and international law, he is not entitled to diplomatic immunity,” Hua said at a daily briefing.

Kovrig, a Northeast Asia analyst for the International Crisis Group think-tank , took a leave of absence from the Canadian government. [Source]

Canadian consular officials have been granted a second visit to Kovrig since his arrest on December 10th. The officials also gained access to Michael Spavor. The two men remain in secret detention and have been denied visits from lawyers and family members. A total of thirteen Canadians have been detained in China since bilateral relations deteriorated in the wake of Meng Wanzhou’s arrest.