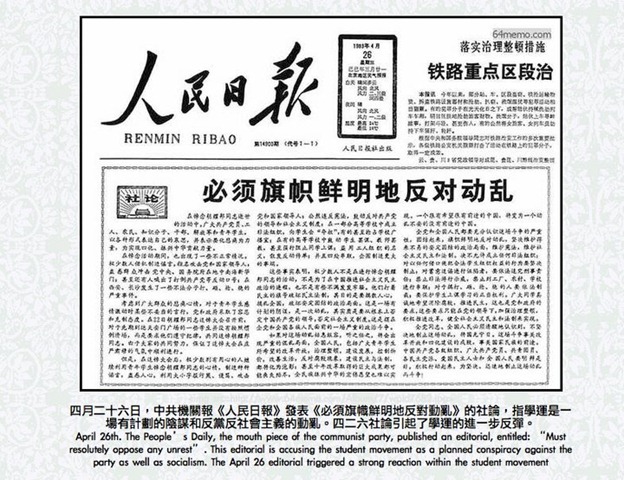 On April 26, 1989, The People’s Daily published a front page editorial which took a strong stance against the ongoing protests in Beijing and other cities. The editorial is widely seen as a turning point in the protest movement. From the editorial, translated on The Gate of Heavenly Peace website: 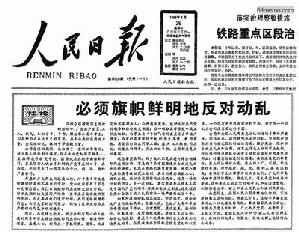 These facts prove that what this extremely small number of people did was not to join in the activities to mourn Comrade Hu Yaobang or to advance the course of socialist democracy in China. Neither were they out to give vent to their grievances. Flaunting the banner of democracy, they undermined democracy and the legal system. Their purpose was to sow dissension among the people, plunge the whole country into chaos and sabotage the political situation of stability and unity. This is a planned conspiracy and a disturbance. Its essence is to, once and for all, negate the leadership of the CPC and the socialist system. This is a serious political struggle confronting the whole party and the people of all nationalities throughout the country.

If we are tolerant of or conniving with this disturbance and let it go unchecked, a seriously chaotic state will appear. Then, the reform and opening up; the improvement of the economic environment and the rectification of the economic order, construction, and development; the control over prices; the improvement of our living standards; the drive to oppose corruption; and the development of democracy and the legal system expected by the people throughout the country, including the young students, will all become empty hopes. Even the tremendous achievements scored in the reform during the past decade may be completely lost, and the great aspiration of the revitalization of China cherished by the whole nation will be hard to realize. A China with very good prospects and a very bright future will become a chaotic and unstable China without any future.

The whole party and the people nationwide should fully understand the seriousness of this struggle, unite to take a clear-cut stand to oppose the disturbance, and firmly preserve the hard-earned situation of political stability and unity, the Constitution, socialist democracy, and the legal system. Under no circumstances should the establishment of any illegal organizations be allowed. It is imperative to firmly stop any acts that use any excuse to infringe upon the rights and interests of legitimate organizations of students. Those who have deliberately fabricated rumors and framed others should be investigated to determine their criminal liabilities according to law. Bans should be placed on unlawful parades and demonstrations and on such acts as going to factories, rural areas, and schools to establish ties. Beating, smashing, looting, and burning should be punished according to law. It is necessary to protect the just rights of students to study in class. The broad masses of students sincerely hope that corruption will be eliminated and democracy will be promoted. These, too, are the demands of the party and the government. These demands can only be realized by strengthening the efforts for improvement and rectification, vigorously pushing forward the reform, and making perfect our socialist democracy and our legal system under the party leadership. [Source]