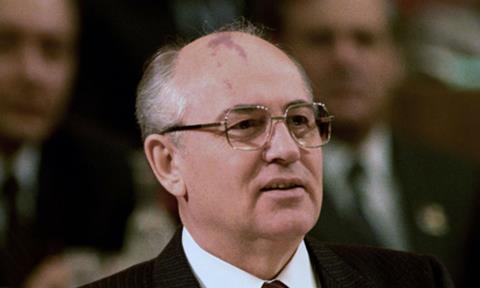 As several hundred thousand disgruntled citizens turned the center of the capital into near-pandemonium tonight, Mikhail S. Gorbachev sharply distanced himself from the unrest that has disrupted his meeting with Chinese leaders.

Mr. Gorbachev, after a late Monday briefing on the situation, told Zhao Ziyang, the Chinese Communist Party leader, that he had little sympathy for ”hotheads” who demand change overnight.

Late tonight, Mr. Zhao sent a message to the students calling on them to end their hunger strike and – in a major concession – declared that the highest levels of the Government and Communist Party ”affirmed the students’ patriotic spirit in calling for democracy and law, opposing corruption and striving to further reform.”

The written message, which Mr. Zhao said represented all five members of the standing committee of the Politburo, amounted to a retreat from the party’s previous position that the demonstrators were trying to cause trouble and sabotage the economy. Mr. Zhao also promised that the authorities would not punish the students after calm was restored. [Source]

Also, from a New York Times editorial on the same day:

The right guide to the news from China isn’t Marx or Mao, but Ripley’s ”Believe It or Not.” Just as Moscow and Beijing ceremonially ended 30 years of estrangement, 300,000 protesters occupied Beijing’s huge central square to demonstrate for democracy and a free press. And their hero? Mikhail Gorbachev, who was all but smuggled by his hosts into the Great Hall of the People so he wouldn’t see – or be seen by – the youthful masses saluting him as ”the democratic envoy.”

What ought to concern Washington is not what the students are asking, but where they are looking. Reforms in another Communist state have an obvious, special relevance to China’s young people. But more and more it is Mr. Gorbachev who commands attention and symbolizes change and liberation. And that might command George Bush’s attention.

China’s Communist leaders seemed paralyzed by the student-led demonstration. With the world press on hand for the China-Soviet summit meeting, a crackdown would be a disastrous humiliation, as the students well know. Even the Chinese media report the popular protests against an aging establishment, on a scale unparalleled since Mao Zedong proclaimed the People’s Republic in 1949. Mr. Gorbachev himself has been upstaged. [Source]