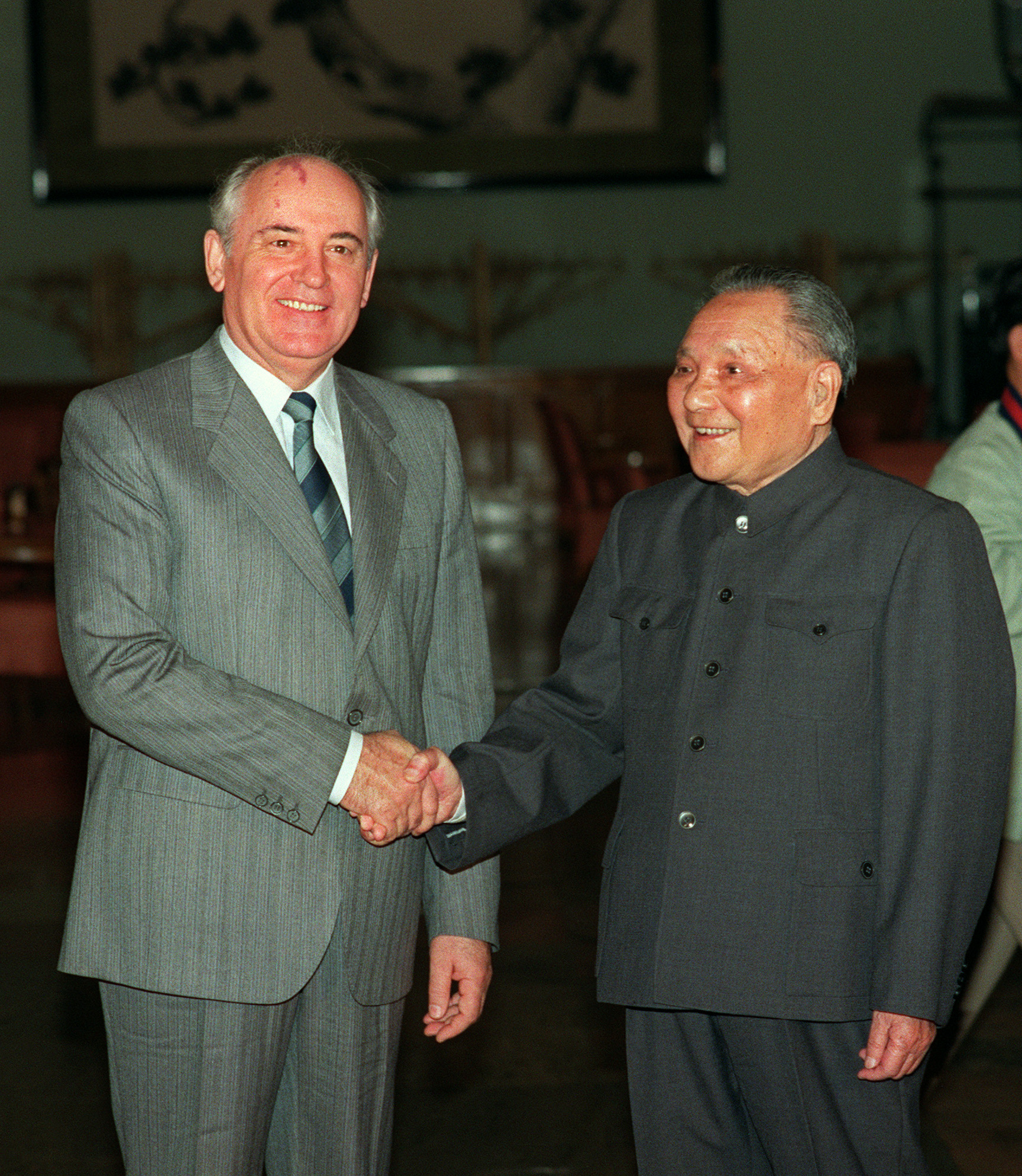 Deng Xiaoping and Mikhail S. Gorbachev shook hands today to signal the formal end of three decades of hostility between China and the Soviet Union.

The two leaders then met for two and a half hours. Afterward, Mr. Deng was the host at a banquet for the Soviet President.

The 84-year-old Mr. Deng, whose frailty and stumbling speech contrasted with the strength and vigor of the 58-year-old Mr. Gorbachev, said as they met that several years ago he had noted a new mood in the Soviet Union and had hoped for the summit meeting. Mr. Deng added that he believed the new Soviet outlook held the potential to help resolve what he described as the central problem in international affairs, the Soviet-American relationship.

[…] The summit meeting, the first between the two countries since 1959, is described by both sides as marking the beginning of normalization of relations. However, the domestic atmosphere in Beijing was decidedly abnormal because of continuing protests.

In a major loss of face for the Chinese leadership, Monday’s itinerary had to be repeatedly adjusted to avoid 150,000 students and spectators who took over Tiananmen Square. While Mr. Gorbachev, the Soviet leader, did not directly refer to the student demonstrations in his meeting on Monday with President Yang Shangkun, the entire day seemed to be an exotic dance in which the Chinese side tried to shield Mr. Gorbachev from the protesters. [Source]

Also from another report in the same day’s New York Times:

One after another today, groups of teachers, professors, museum workers, factory workers, writers, artists, scholars, entrepreneurs, low-level officials, middle-school students, and even journalists from the official People’s Daily paraded into Tiananmen Square behind their own wide, colorful banners.

They sang the ”Internationale” and chanted anti-Government slogans, while inside in the adjacent Great Hall of the People, President Yang Shangkun held a banquet this evening for the Soviet leader, Mikhail S. Gorbachev.

The ebullient crowd of about 150,000 protesters and spectators rallied to show support for a hunger strike on the opening day of the first Chinese-Soviet summit meeting in 30 years.

The crowd was significant not only for its size and the shadow it cast over the summit meeting, but also because it marked the first time that intellectuals and workers organized themselves to join the students in a demonstration. Previously, workers frequently took part in demonstrations, but not in any organized way. [Source]

See also an AP article from the same day.