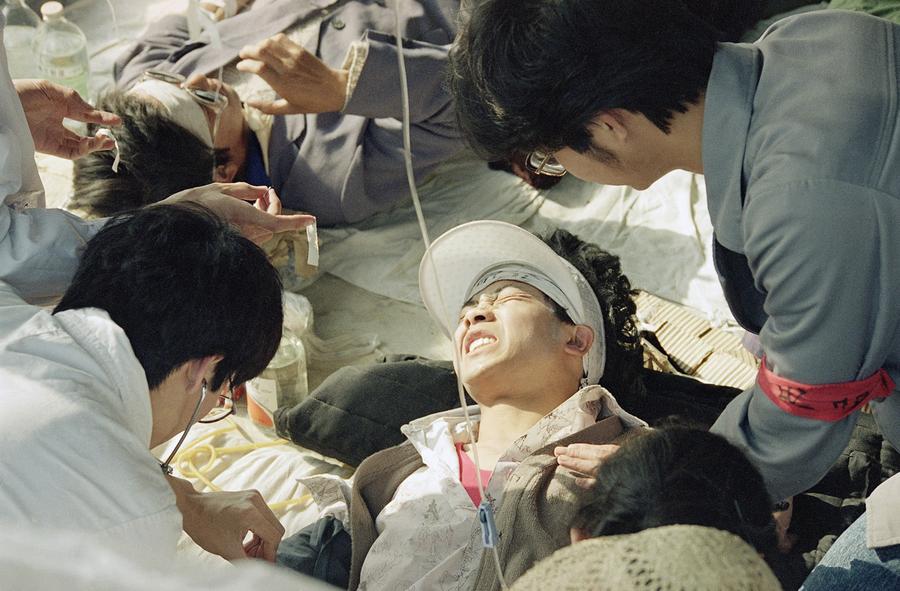 China’s student leaders today called for an end to their two-week occupation of Tiananmen Square, in the center of the capital, but said that they would continue to hold large-scale demonstrations to press for greater democracy and the resignation of Prime Minister Li Peng.

The announcement represented a major success for Mr. Li. In effect, the Government will have evicted the students not by politically embarrassing means such as brute force, but by waiting until the square was so fetid as a result of lack of garbage collection and the students so malodorous that they chose to leave on their own. ‘We Have Responsibility’

”It is very difficult to continue our sit-in,” a student leader, Wuer Kaixi, told a press conference. ”As leaders, we have responsibility for students’ health, and the difficulties are obvious. Hygiene is extremely bad and the food is insufficient.” [ In a report from Beijing on Sunday, Reuters said that thousands of students took to the streets of the capital to renew their call for democracy and to protest the purge of reformers in the Chinese leadership. Students set out in five columns from the city’s northwestern university area toward central Beijing. Some carried banners reading, ”I can die, democracy cannot die,” Reuters said. ] The call to leave the square is only a proposal, and it must be voted on by the students who are occupying it. But most seemed ready to go, and some students are leaving even before the official pull-out date of Tuesday.

Mr. Li today gained further support in the power struggle within China’s ruling circle when former President Li Xiannian warned that ”people in the leadership” of the Communist Party had created confusion in China. It was a clear reference to the party leader, Zhao Ziyang, who is now being criticized in preparation for an attempt to dismiss him. [Source]

Chen did not mention Communist Party chief Zhao Ziyang by name, but his attack clearly was aimed at Zhao’s liberal reformist faction of the party.

“We old comrades must resolutely expose and struggle against a very, very small number of people who have fabricated schemes and intrigues, and never yield to them,” Chen said.

“This turmoil is truly not coincidental. One of the important reasons is that for a certain period of time we have eased off education in Marxist thought,” he said in language reminiscent of chaotic factional strife and leadership struggles of the 1966-1976 Cultural Revolution. [Source]

And from that day’s Los Angeles Times:

Far fewer ordinary citizens joined the students than in several massive demonstrations over the past two weeks, but those who lined the route cheered and flashed victory signs. Passengers stranded on buses that were trapped by the rally at a major intersection leaned out their windows and clapped in approval.

“This is what is in the people’s hearts,” said a man in his mid-30s who smoked a cigarette as he watched from a curb.

One group of students carried brooms and a banner saying they would clean up corruption in government–along with the garbage strewn about Tian An Men Square.

Earlier in the day, students were posing for snapshots in front of the Monument of the People’s Heroes at the center of the square, as though they were preparing for the whole scene to become a memory. A cluster of protesters gathered around a poster denouncing Li Peng’s wife and son for corruption. Among her alleged crimes were getting drunk one evening at the Great Wall Hotel, and having a swimming pool built. [Source]

Also from another article from that day’s New York Times:

About 200,000 young people attended a daylong open-air pop concert in Hong Kong today to raise money for the pro-democratic demonstrations in China.

The crowd fell silent as a relayed newscast from Beijing reported the apparent triumph of hard-line leaders. ”We are very disappointed,” said a student, putting her head in her hands.

But organizers and performers vowed the struggle would go on.

[…] When asked why they had come to the concert, two students looked slightly bewildered by the question. ”Can’t you see?” said one. ”We are Chinese.” [Source]

Supporters from Hong Kong join a student march for democracy on May 28, 1989. Their banner reads “Hong Kong compatriots whole-heartedly support you” (via CND)

More articles from the May 28 New York Times:
– “The Same Old Response, But Not the Same Old China”
– “Reporter’s Notebook; For Foreigners, Beijing Turns Chilly”
– “Reluctant Rebel Joins Students’ Cause”