30 Years Ago: What China’s Students Want 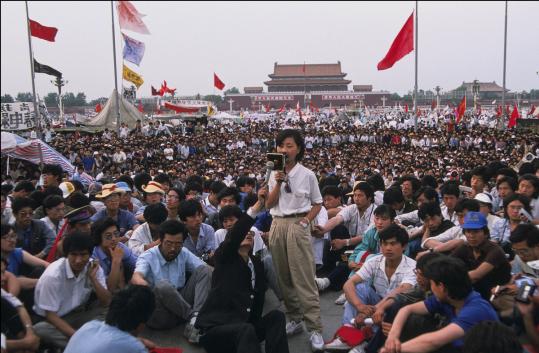 Photographs of streets filled with students waving banners as far as the eye could see ran on the front pages of most newspapers. The newspapers also reported details of demonstrations not only in the capital but in many other cities. Some of those demonstrations had not previously been reported.

The largest demonstration was in Beijing, where 100,000 people gathered in the central square to call for greater democracy and an end to corruption.

China Youth News reported demonstrations in at least 11 cities outside Beijing, and reported that in Shanghai, Xian and Wuhan, more than 10,000 students took part. The other cities were Changsha, Hangzhou, Nanjing, Taiyuan, Chengdu, Chongqing, Lanzhou, and Xining.

More accurate reporting has been one of the demonstrators’ principal demands, and today’s articles and photos seemed to be a move to satisfy the demand. While the articles were not as comprehensive as the students would have liked, the surprise was that they appeared at all. [Source]

See also an editorial from the same edition of the Times:

China’s youth have taken to the streets in a stunning challenge to authority. They feel they are being asked to forgo the higher living standards enjoyed by non-Communist Chinese and the new freedoms enjoyed by many non-Chinese Communists. No wonder they are in open revolt. And it’s not just students. Their original demonstrations in Beijing have spread to other cities and won the support of other classes. The conservative Communist leadership that not so long ago bemoaned student apathy now needs to radically readjust its assumptions. Already it has shifted to more conciliatory language. Its ability to accommodate the student movement’s ideas will help determine China’s political and economic future.

Though the latest eruption has been sudden, the student movement has deep roots. The lunacies of the Cultural Revolution undermined the Communist Party’s legitimacy. Inflation, corruption and nepotism accompanying the post-Mao economic reforms brought the leadership into further disrepute.

Now, two additional factors intensify the resentment. One is the growing prosperity they see in Taiwan. The other is the unwillingness of Chinese Communist authorities to emulate the reforms sweeping the Soviet Union and Eastern Europe. [Source]