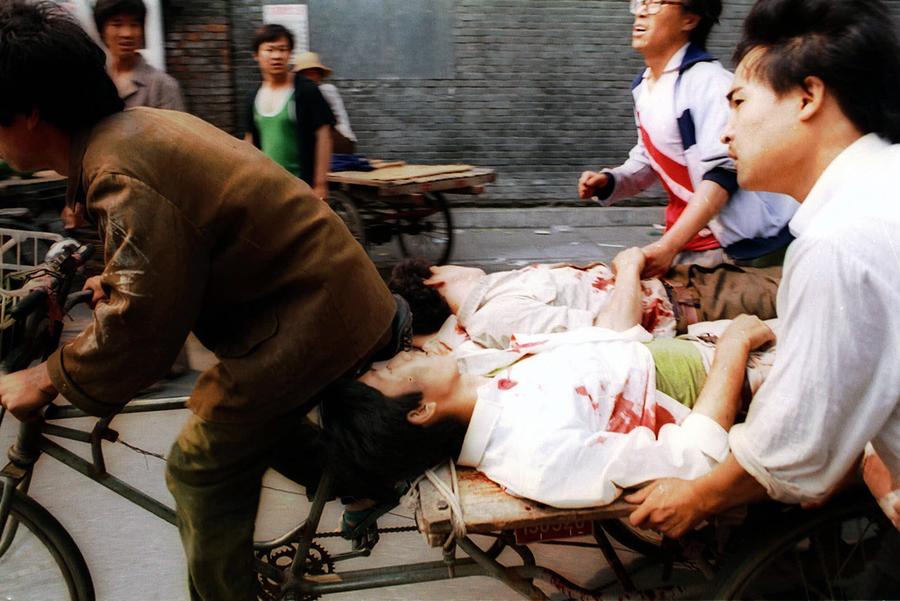 This year marks the 30th anniversary of the nationwide, student-led democracy movement in China, and the subsequent June 4th military crackdown in Beijing. To commemorate the student movement, CDT is posting a series of original news articles from 1989, beginning with the death of Hu Yaobang on April 15 and continuing through the tumultuous spring. The full series can be read here.

Several hundred civilians have been shot dead by the Chinese army during a bloody military operation to crush a democratic protest in Peking’s (Beijing) Tiananmen Square.

Tanks rumbled through the capital’s streets late on 3 June as the army moved into the square from several directions, randomly firing on unarmed protesters.

The injured were rushed to hospital on bicycle rickshaws by frantic residents shocked by the army’s sudden and extreme response to the peaceful mass protest. [Source]

Another ABC News report from June 4:

See photos of the night of June 3rd-4th in Beijing here and via the Twitter feed of Patrick Chavonec.

The Google News Archive has a scan of a June 4, 1989 report which appeared in the Eugene Register-Guard:

At 1 a.m. today, the “Goddess of Democracy,” the Chinese students’ version of the Statue of Liberty, was still looking down on the throngs at Tiananmen Square.  Floodlights still lit up the Monument to the People’s Heroes, the landmark in the center of the huge open space.

Suddenly, at 1:45 a.m., the lights were shut off and the firing started.

[…] Young Chinese moved as fast as they could, frenetically, in all directions, as if they did not know where or how to escape. [Source]

Also from the Rome-News Tribune:

The standoff between troops and protesters [in Tiananmen Square] had been tense but largely peaceful for weeks, with soldiers seemingly reluctant or unable to move against the crowds until the first widespread violence broke out Saturday afternoon.

A doctor from the Fuxing Hospital in western Beijing, where troops began firing on people in the street, said the hospital had taken in 15 dead and so many wounded they had to be put in garages.

“There are people who have been shot in the head, chest, stomach, legs and eyes,” said a nurse at Beijing Union Medical College, which reported 24 dead and hundreds injured. [Source]

This analysis of the factors behind China’s student pro-democracy movement appeared in the New York Times on June 4, 1989:

But if the timing and scale of earthquakes is uncertain, at least the fault lines can be mapped. In China, for most of the population, these fault lines – the immediate causes of public dissatisfaction – relate not only to vague yearnings for democracy but, more importantly, to profound economic frustrations and disgust over social inequities and corruption.

Before the turbulence, experts looked at China and saw an economic miracle – a society that in little more than a decade has managed to propel itself from the bland egalitarian poverty of Maoism to the new-found consumerism of color television sets, earrings and disco dancing. During the last 10 years, the average income in China has more than doubled.

But the expectations of the Chinese have risen even more. Foreign analysts see double-digit growth, but the Chinese tend to focus on the washing machine that they can now dream of but still can’t afford, the rising prices that seem to cheat them out of their higher salaries, the bribes that they must pay in order to change apartments or, in defiance of official policy, to have a second child. The result is dissatisfaction and anger, mixed with bitterness at the advantages that high officials enjoy. In April and May, these subterranean pressures finally erupted in the volcano of protest that, whatever happens, has profoundly changed the way China will be governed. [Source]

Robert Pear reports on the U.S. government’s reaction to the military crackdown on student protesters in Tiananmen Square for the New York Times:

President Bush said today that he deeply deplored the shooting of protesters by Chinese troops.

The President said it was ”clear that the Chinese Government has chosen to use force against Chinese citizens who were making a peaceful statement in favor of democracy.”

[…]Secretary of State Baker, appearing on the Cable News Network television program ”Newsmaker Saturday,” declined to say whether the Bush Administration would seek to penalize China by such steps as cutting off sales of American arms to Beijing. [Source]