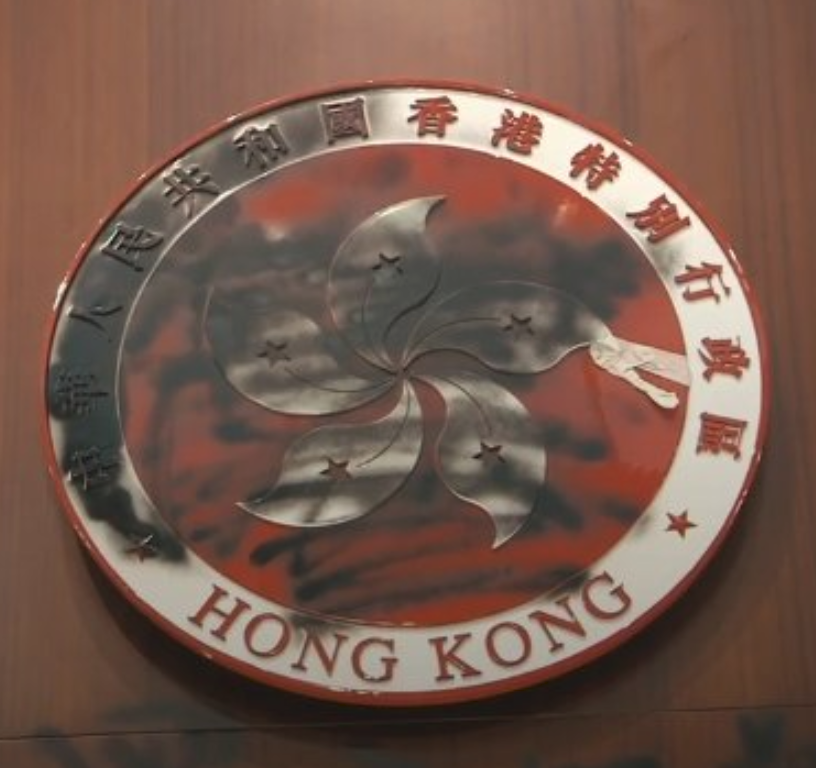 Hundreds of thousands marched again in Hong Kong on Monday to mark the 22nd anniversary of the territory’s handover to China and express continued opposition to proposed extradition rules that many fear would decisively undermine its remaining autonomy. At the same time, a smaller group of protesters gathered outside the seat of Hong Kong’s Legislative Council, and eventually, despite pleas from pro-democracy lawmakers, broke in, vandalized it, and briefly occupied the LegCo chamber. From the main protest:

A sea of umbrellas marching through Causeway Bay at July 1st protest in Hong Kong pic.twitter.com/gy91L14eYy

This family contributing to the march by picking up litter along the way. pic.twitter.com/sYAHnfjMDV

Just did a livestream from the wan chai bridge. If anything it’s more crowded down in the protest now. pic.twitter.com/HMu83SPGdG

While perhaps not as densely packed as the previous two marches, be in no doubt this march is still HUGE. pic.twitter.com/juZWS0Gn6N

Away from the tension at Legco, the atmosphere in Wan Chai feels more like the usual July 1 marches, with a variety of political groups and NGOs fundraising and promoting their cause, including a couple selling homebrewed herbal tea pic.twitter.com/9aLNVVshz7

These guys probably weren’t paying attention to breaking into LegCo for example. pic.twitter.com/nhk2ga5oYq

Hundreds of thousands took to the streets today in Hong Kong pic.twitter.com/ojb6pDAjB1

Others on Twitter tracked the events away from the main march:

Protesters gathered outside LegCo on the eve of the July 1 handover anniversary chanted “Hong Kong people, add oil” at an otherwise sombre and quiet rally.

“I hope one day we can all take off our masks and meet each other,” someone with a loudspeaker said. pic.twitter.com/dpeKj2Nbut

Bricks being dug out of the road protesters wheeling them to the front of the blockade pic.twitter.com/kLj9GiL9P2

As helicopters carrying the Chinese and Hong Kong flags fly past, protesters give them the middle finger pic.twitter.com/XNO72m82yg

Thread – Here's how fighters in #HongKong mark the city's 22nd anniversary of transfer of soverignity. PRC flag replaced by a black flag to express anger & disobedience to authority, while #HK flag flies at half-mast perhaps to mourn the death of freedom & one country two systems pic.twitter.com/bloUAD7TeR

Someone just offered me some McDonalds pic.twitter.com/v41flKN0Em

And using zip ties have refashioned them into barricades (while at the same time much improving the navigability of the city’s footpaths for pedestrians) NB @DesigningHK ! pic.twitter.com/hkA9pIlY60

Outside Legco, the sound of sledgehammers against the glass and a crowd of protesters chanting, 加油加油, or “Come on! Go!” pic.twitter.com/iusqHMZYLg

7:20PM The sound of clanging metal reverberated over crescendoing cheers. To conceal those smashing the glass gates, protesters have huddled around them with a moving wall of umbrellas. pic.twitter.com/uePf7VSJFU

Photos taken earlier on when the lawmakers tried to stop the protesters from storming the legco. #antiELAB #HongKongProtests #FreedomHK pic.twitter.com/5za9ZHMj3R

hundreds of protesters have smashed through into hong kong's legislative council building and police have retreated. 22 years after hong kong's sovereignty was transferred to china, we are in completely uncharted territory. pic.twitter.com/B6O0omU66z

Hundreds take over Legco in HK destroying everything, they want to occupy the chamber pic.twitter.com/cAcAQ0gaGj

Telegram groups now calling protestors who are not entering Legco to ensure those who have entered will have an escape route when something happens + to encircle the Legco complex so police cannot approach and close on those inside.

Inside HK'S Legislative Council building, protesters have filled walls with grafitti, created barricades with metal gates and broken panes of glass. Many are holding homemade shields of cardboard. Eggs are splattered on the walls. pic.twitter.com/dLaz09h1oo

The British colonial flag of Hong Kong. In LegCo, exactly 22 years after the handover – to the day.#antiELAB#NoChinaExtradition#SaveHongKong pic.twitter.com/oXXrZRXs9c

A very meta moment- some protesters resting in the cafeteria inside LegCo where they’re watching the coverage of the protests on tv #HongKongExtraditionLaw #hongkongprotests #antiELAB pic.twitter.com/lkYYypLBvY

A protester tears apart a copy of the Basic Law at the Legislative Council president’s desk covering by a pre-Handover Hong Kong flag – a very symbolic protest https://t.co/3xzXqlS0J8 pic.twitter.com/3mDBSDqEAl

(Inkstone’s Alan Wong posted a thread explaining the symbolism of the colonial flag.)

in the legislative chamber, an unmasked protester rallies the crowd: we've come too far. this is our final opportunity—we can't afford to lose. if we have a thousand in here they can't strike or gas us all. if you can't stay, please peacefully surround the building and protect us pic.twitter.com/mtd5zuidew

The LegCo Building was violently attacked and forced to enter illegally. The police severely condemned the violent attack. The police will conduct sweeping in a short period of time and will take reasonable force.The police also appeal unrelated protestors to leave the vicinity. pic.twitter.com/0YPsExD3FM

NEW- police are reportedly calling today’s action a riot and protesters are calling for others to come down from upper floors of LegCo to gather collectively and decide next steps pic.twitter.com/Oimp7OYmgK

protesters reiterate their demands. "if the government doesn't withdraw the extradition bill, we'll keep playing this way until the end. we've now entered the chamber once and we will come back a second and third and fourth time. the legislative council belongs to the people." pic.twitter.com/kTArW4TAOA

in addition to previous demands—protester calls not just for lam's resignation, but for full universal suffrage for both the chief executive & legislative council. "we are putting our bodies on the line to protect our home," he declares. pic.twitter.com/hWf5KqSrTt

Outside LegCo, protesters have have toughened up the barricades after police have announced they were coming to the scene pic.twitter.com/tcpmj9fLRb

multiple protesters are crying; the thought of leaving just a few people in the chamber to face imminent police violence is unbearable. but the plan remains the same—and the protesters choosing to withdraw will head downstairs to join the crowds trying to hold off the police. pic.twitter.com/8eFOGYJH7T

suddenly dozens of protesters burst in chanting "leave together!" and grab the remaining few protesters out of the chamber to safety. after the recent tragedies, protesters are determined to leave no one behind, no matter what. pic.twitter.com/IPm7Ds4Vda

WATCH: #ExtraditionBill protesters in #HongKong's Legislative Council argue about what to do as police move in on them, with some trying to drag people out of the chamber pic.twitter.com/vQfI1C5hHA

midnight. police have arrived, armed to the teeth. they are charging and hurling tear gas grenades. again the night has turned into hell. pic.twitter.com/E8RIJ3KUAZ

Protesters are backing down Tim Mei Ave toward Lung Wo Rd, all the while extinguishing teargas cannisters with water and fire extinghishers. pic.twitter.com/SNTvAFQGGB

Something of a pause now as police clear barricades on eastern edge of Harcourt protest camp. I found the portrait of Jasper Tsang from LegCo. pic.twitter.com/8x8tJIbU6a

Protesters waving everyone to fully clear area, as one told me “safety first” #hongkongprotests #antiELAB pic.twitter.com/Sxk40YFOSJ

Elderly woman standing in front of dozens of riot police, telling the officers that she won’t charge, but she also won’t be afraid of the police as well. “Do you think the teenage protesters want to break the glass walls? The government forced them to do so!” @SCMPNews pic.twitter.com/MWB3DpAbfb

Police have pretty much cleared the surrounding area of LegCo and pushed protesters out, now they’re telling journalists to leave pic.twitter.com/N2BRqo4SJe

Police now filing into LegCo – just before midnight I spoke to some protesters inside the chamber who said a few hardcore demonstrators were going to try and camp out inside the building pic.twitter.com/YmKiDLFLJ7

The last 3 protesters who refused to leave the #LegCo chamber have all been removed by other protesters. Their values should be respected but their lives and safety are far more important. #Hongkongers take care one another it shows again. #反送中 #HongKongProtests pic.twitter.com/OAJrwj1dxQ

I don’t have a view of what’s outside as I’m still in Legco tracking the police. No one found after 45 minutes of searching every room on every floor @SCMPNews #antiextraditionbill #AntiELAB pic.twitter.com/GaiBTrhv1H

But this banner "swear to protect rule of law, oppose extradition to China" is still hanging pic.twitter.com/DCnw1ZtFrw

Even amid the damage, there were signs of the restraint and consideration for which the protests have been widely praised.

Crowd reacting as some tear gas thrown. Can’t tell from where. Someone is literally wrapping my arms in Saran Wrap to protect me as I tweet #HongKongProtest #antiELAB #HongKongextraditionbill pic.twitter.com/68ljDiWeqR

Scenes inside the legislative building:

“There are no rioters, only a tyranny”, says this graffiti next to a makeshift barricade guarding the library with a sign: “protect the books, no damaging” pic.twitter.com/0qC8OcwSTA

Not everything. Protestors were putting up signs asking people not to destroy important documents. pic.twitter.com/iRyvT49U1q

Yet there’s still room for considerate behaviour, as we see here with the handwritten warning not to destroy the valuable items in this room pic.twitter.com/iiOD01sMBo

What you don’t see on the news. Two #antiELAB protesters and a firstaider approached riot police to offer bottles of water. They kindly accepted. One protester laughed and said “唔好再見! (Hope not see you again)” pic.twitter.com/CFGrZFarHI

Seeing that I wasn't wearing any, a protester thrust a pair of googles in my hand as he retreated from police

This turn in the resistance to the extradition changes has sparked widespread debate and concern, of which more coverage will follow.