The following censorship instructions, issued by government authorities, have been leaked and distributed online. The name of the issuing body has been omitted to protect the source.

CDT Chinese editors note that on July 7, netizens published a government “unified notice” following a bus crash in Anshun, Guizhou that killed 21. The notice requires government departments to follow official reports on the incident, to turn down media interviews, and not to let any unofficial information—including medical documents—spread in the media or on social networks.

All discipline inspection committees, official departments, new residential communities, and officially dispatched agencies, regarding the July 7 car accident in Hongshan Lake, Anshun, please don’t accept any media interviews. Let only officially published information serve as the standard, and please have all work units inform all personnel, cadres, and staff, not to disseminate comments, images, or video related to the treatment or critical care to the media or to social networking circles.

Please quickly pass this on!!! If district level government agencies are discovered to have released unofficial information, relevant personnel will be held accountable. [Chinese] 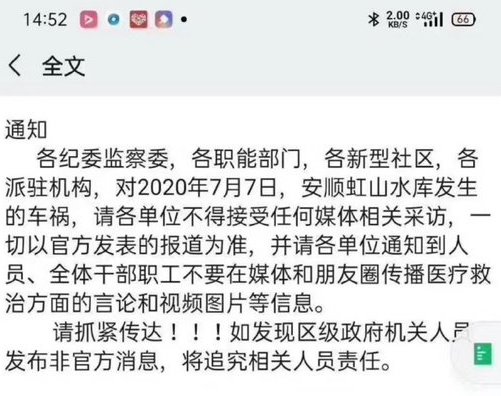 The accident occurred at noon on Tuesday in Anshun, Guizhou province, when the bus appeared to go out of control, cross to the opposite side of the road and crash into the Hongshan Reservoir, according to a video posted online.

[…] Twelve of the passengers were students. Five died from the crash and seven were being treated for their injuries.

The driver, a 52-year-old local man with the surname Zhang, has also died in the crash. He has been driving the bus since 1997, Xinhua reported.

Out of the 21 who died, 20 were found dead at the scene and one died in the hospital.

It is not clear whether the deaths occurred at the scene or in hospital. Rescuers were still investigating how many people were on the bus and whether more might be missing. […] [Source]

Caixin relays further details about the crash, and situates the incident into the context of ongoing floods that have hit southern China hard recently:

Local emergency management said the accident happened around noon when the bus was driving past the Hongshan Lake reservoir. Surveillance video released by state broadcaster CCTV on social media showed the bus proceeding slowly before it suddenly veered across several lanes of oncoming traffic and crashed through a guardrail. The bus rolled over and fell into the water.

[…] A local resident in Anshun said the bus is usually crowded as it stops at several schools. But traffic Wednesday was less busy as primary and high schools closed for the Gaokao exam.

[…] The deadly incident was another tragedy to hit mountainous Guizhou, one of China’s poorest regions. The province has been among the hardest-hit areas as downpours and flooding ravaged south China in recent weeks.

At least 119 people have died or gone missing across China in devastating floods that hit 26 provincial regions, according to Monday data from China’s Ministry of Emergency Management. [Source]