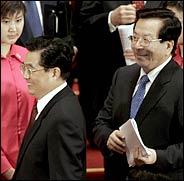 Three years after becoming China’s top leader, Hu Jintao has solidified his grip on power and intimidated critics inside and outside the Communist Party with the help of the man once seen as his most potent rival.

Mr. Hu, China’s president and Communist Party chief, and Zeng Qinghong, vice president and the man in charge of the party’s organizational affairs, have tackled the most delicate domestic and foreign policy issues as a team, governing as hard-liners with a deft political touch, former Chinese officials and scholars with leadership connections said.

Their bond is a surprise because Mr. Zeng was the longtime right-hand man of the previous No. 1 leader, Jiang Zemin. A skillful backroom political operator considered to have strong military ties, Mr. Zeng was long viewed as the only person capable of challenging Mr. Hu for power.

“The Endgame of Communist Rule”: Responses