After 1949, there was always just Mao’s portrait hanging in Tiananmen Square. But now there is something new: 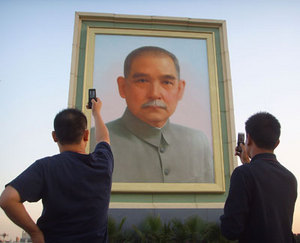 According to China Daily, People walked around and even used their mobile phones to take photos of a huge portrait of Sun Yat-sen, who now is widely recognized as the nation’s modern founder. The portrait is part of festive installations in Tiananmen Square to mark the coming National Day which falls on October 1. [Another Photo]