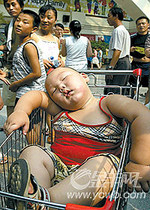 Chinese men are fatter than they were five years ago, but overall Chinese are more physically fit, a government survey released Monday said.

The survey of nearly half a million people between the ages of 3 and 69 found that 33.2 percent of adult males were overweight, a 1.3 percentage points higher than a similar survey conducted in 2000, according to the nationwide survey conducted by nine government agencies. Obesity also edged up, the survey said, with 9.3 percent of adult males qualifying as obese, 1.7 percentage points higher than five years ago.

The findings highlight how China’s rapid transformation over two decades from dire poverty to relative prosperity is having an impact on lifestyles. With food no longer scarce, Chinese are eating more meat and other fattier foods, and the busy pace of urban life has helped make Western-style fast-food popular.[Full Text]

Some background articles related to the fattening of China: “U.S. French Fries Heat Up China’s Fast Food Industry” from FAS online and “Life in the fast lane” from FS World.

China Fences In Its Nomads, and an Ancient Life Withers

Minitrue: Executed Will No Longer Be “Organ Donors”