As Cities Expand, So Do Local Campaign Finances and Vote-buying – Liaowang Weekly 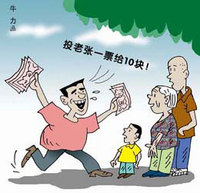 What’s really puzzling, at least on the surface, in some villages around some Chinese cities or towns is political candidates are offering significant cash gifts to buy votes. In one village in Inner Mongolia, villagers are receiving cash deliveries ranging from 500 to 1,000 yuan per ballot from each candidate.

But as the land appreciates along with expanding urban areas, Liaowang Weekly (Áû≠ÊúõÊñ∞ÈóªÂë®Âàä) learned, the attraction and potential profitability of village officialdom has grown to the extent that candidates are willing to spend hundreds of thousands of yuan on “campaigns.”

In the Qianbaimiao Village (ÂâçÁôΩÂ∫ôÊùë), population 1,000, of Jinhe Township (ÈáëÊ≤≥Èïá) in Hohhot City, Inner Mongolia, 662 villagers participated in the recent election. In a week-long election season, the village was bustling.

“We have free meals every single day,” Zhang Yue, a farmer, said. Vans and buses were shuttling in and out of the village to transport voters for banquets. Jokingly, farmers wished they could have an election a few times a year.

One day before the election, villagers were flooded by two candidates, their aides and others loaded with cash. Yun Liancheng (‰∫ëËøûÊàê), recumbent village chief, started his delivery of 500 yuan for every ballot, villagers said. Then Qiao Yumei (‰πîÁéâÊ¢Ö), a member of the current village administration, upped her offer to 600 yuan. Soon Yun offered 200 yuan more.

Some populous households received as much as a few thousand yuan, almost a year’s income. One villager said that, after 500 yuan in cash, Yun promised him 4,500 yuan more if he is elected.

It is learned that the village is not alone in outrageous campaign finances, especially vote buying and other illegitimate schemes. And the closer a village is to a city or a big town, the more money candidates are willing to put in the stakes.

And villagers know the deal as well as the candidates. Elected, village cadres will have pretty much unchecked power to make decisions on land transfers, distribution of land for residential projects and other infrastructure projects. Li Baoming, of Qianbaimiao, said Hohhot built a highway through the village and used some farmland, grassland and wild land. Li said the villagers didn’t see any of the compensation for the used land.

Bandurski on the Villages Within China’s Cities