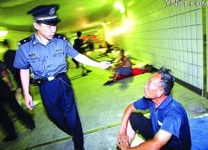 From The Christian Science Monitor: Local government abuses have created an underclass of petitioners who seek redress in Beijing.

They arrive from distant villages and towns in groups of five or less, eyes downcast as they approach the entrance to the walled compound. Many wear the drab bulky clothes of China’s hardscrabble countryside, and their bags are stuffed with dog-eared documents, tattered photos, and photocopied letters.

They are China’s growing army of petitioners, seekers of justice in a labyrinth that often seems designed merely to thwart them. Many spend years, even decades, appealing to the government to correct the abuses committed in its name, propelled by the belief that somewhere in the system is a sympathetic official who will heed their cry. Their chances of getting their complaints heard is estimated to be just one in 500.

Rapid economic growth has transformed the lives of China’s poor, lifting hundreds of millions of people out of wretched conditions. But the dismantling of the welfare system, together with rampant corruption and illegal land seizures, has seeded social tensions that often erupt into confrontation with local authorities. And in a political order stacked against them, China’s dispossessed face an uphill battle to voice their grievances over the injustices that scar their lives.[Full Text]