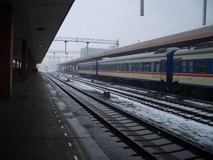 From A Beerist‘s monologue blog (in Chinese, at blog.sina.com BLOG: translated by CDT):

“Above there is Heaven; on earth there is Hangzhou and Suzhou.” A few days ago, I was on my way to meet a friend in Shaoxing, transferring to another train at the Hangzhou train station. I got on the train early, and the car was kind of empty. Only at the end of the car, there was a circle of people, as if something was happening. I put down my luggage, and went over to see what was going on. People were surrounding a seat, where a girl about four or five years old was lying down. She was an abandoned baby, or more accurately, an abandoned child.


This was an intercity train between Hangzhou and Ningbo. The train just came from Ningbo, and was about to turn back. I heard the conductor say, there was a migrant worker couple sitting on this seat, and this child was likely left by them.

The little girl seemed pretty, and was dressed rather cleanly. Her head was lying on a plastic bag which was stuffed with clothes. People were saying that she was handicapped, therefore she cannot sit up, and she was not talking either, so maybe she was mute. I saw the little girl was very calm, facing this circle of adults, some of whom were angry and some pitied her, but she seemed to see nothing and her eyes were not filled with surprise, resentment or sadness. If one really tried to glean some emotion from her eyes, I felt she was slightly relieved. One passenger handed her a banana, she grabbed it, but could not peel it. The passenger helped her to peel the skin, and she immediately put it into her mouth, but she could not bite it. Another passenger said her teeth may have lost strength. So the passenger who gave her the banana helped to break off a small piece and give it to her. she immediately put it into her mouth, like she was sucking on a piece of sugar.

I thought about the fact that several times I half-joked with my friends about adopting a child. Was this my lucky moment? My heart pounded with this thought, and I could feel my blood boiling. But then I thought about the laws and regulations in our country. There is no way one can adopt a child this easily. I have heard about those complicated procedures and rules for adoption, and I gave up my thought right away. Therefore my blood flowed normally again. It was so normal, just like everyone else’s, that no other person could tell its movement.

The train was about to leave. A policeman came up to the car, probably from the police station of the train station. He put the little girl under one arm and grabbed the plastic bag with the other hand, and carried her out of the car. The little girl’s legs really may have problems. They just hung loosely in the air. The girl still had no expression on her face; she only held the peeled banana tightly in her hand. On the platform, another policeman directed a janitor who was wearing a uniform of a red vest and blue hat, and he came with a tricycle. There was a big pile of flattened cardboard boxes on the tricycle. The janitor reached down into the pile of flattened boxes, and put one of the boxes back together. The policeman put the little girl and her bag of clothes down into the box, and said something briefly. The uniformed janitor got on his tricycle, and quickly, almost delightedly, biked away with the little girl. Two policemen lit up cigarettes and started to share jokes. They must have seen so many of those incidents. The piece of white banana was dropped on the platform, not too far from their feet.