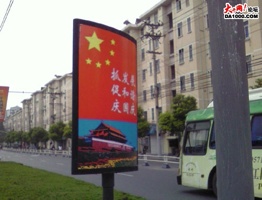 The Chinese National Flag is a red flag with five yellow stars. In the official interpretation, the design uses red as its background (symbolizing the blood of the soldiers who were lost in wars) and bright yellow for its stars. The larger star symbolizes the leadership of the Communist Party of China. The four small stars represent the four classes: the workers, the peasants, the petty bourgeoisie, and patriotic capitalists.


Recently, an apparently flawed painting of a National Flag with SIX stars appeared on a propaganda board during the National Day holiday on the streets of a Chinese city. The above photo was posted on many Chinese BBS and blogs. Here are some comments from the bullogcn after the blogger posted the photo:


Comment 1: Does the fifth small star represent the “fans of the Party” class?

Comment 2: Now that it has six stars, it might be misintereptated that we have a new friend: capitalists.

Comment 4: In this case, the star representing “big capitalists” should be much closer to the center star and actually should be largely overlapping it. No, I am not misinterpreting 🙂

Comment 5: Here is a children’s version of this flag. 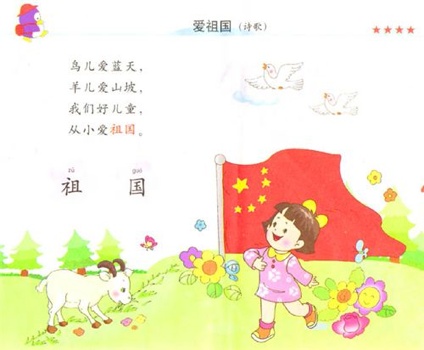 
The national flag of China was adopted at the First Plenary Session of the Chinese People’s Political Consultative Conference held in September 1949, shortly before the founding of the People’s Republic of China.

The flag of the People’s Republic of China is red in color and it has five yellow stars. The color red symbolizes the spirit of the revolution, and the five stars signify the unity of the people of China under the leadership of the Chinese Communist Party.

The large gold star represents Communism and the Communist Party, while the four smaller stars represent the social classes of the people.

In addition, the five stars together reflect the importance placed on the number five in Chinese thought and history.

The flag first went up in Tiananmen Square on October1, 1949, upon the formal announcement that People’s Republic of China was founded.