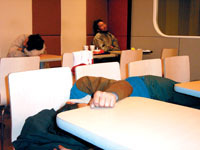 The decision by McDonalds to churn out Big Macs 24 hours a day in some of its restaurants in Beijing has proved an unexpected bonus for the capital’s homeless population this winter.

It is becoming common for Beijing’s homeless people to use the fast food chain’s outlets as a respite from the biting winter and on Friday night more than a dozen people slept in a McDonalds restaurant in Shuangyushu, Haidian District. Some of them ate the food left on the table before going to sleep on the benches.

A middle-aged man said shyly that he had come to Beijing from another province to look for a job. But he had not found one and had no place to live. “I’ve lived in McDonalds for more than two months,” he said.[Full Text]