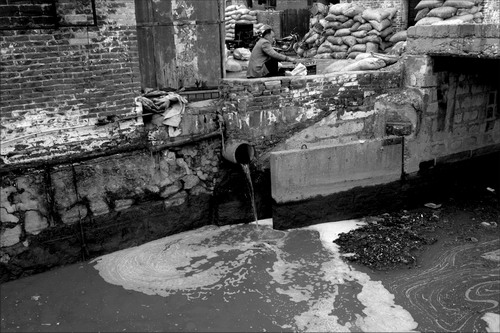 Lianjiao (ËÅîÊªòÊùë) is already home to about 200,000 tons of waste plastic and 500,000 tons of waste paper and cardboard from both overseas and home. The quality of its air and water have declined because of pollutants unleashed by the more than 400 local garbage recycling and processing plants there.

“The land and water are so polluted that it would take over 100 years to rehabilitate them,” said He Pinjing, director of solid waste institute of Tongji University. “It is already a major headache to handle our own waste. How are we supposed to accommodate overseas waste?”

Choked with the black smoke that pours from chimneys of its garbage plants and surrounded by rivers that have been blackened by pollution, Lianjiao has processed more than 200,000 tons of garbage per year during the past 20 years. The volume of its daily trade in garbage is nearly 750 tons, making it the heart of Nanhai‘s waste plastic recycling industry. [Full Text]

Your Christmas Lights Head to China, and Back Again

Beijing to “Clean Up” Illegal Foreigners

Blowing the Lid Off a Hot Commodity – Bob Pool