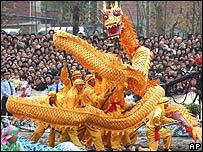 China may stop building a 21-km-long (13-mile) dragon planned as a tourist attraction because of environmental concerns, state media report.

It was originally due to be completed in time for the 60th anniversary of Communist rule in 2009. It is located on top of the Shizhu Mountain, which was designated a national forest park in 2005, in the central province of Henan.

The Henan Environmental Protection Agency says it has sent a team to investigate the project that started without the necessary environmental assessments, Xinhua news agency reported.[Full Text]