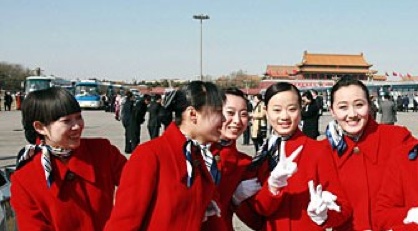 From China in Transition blog:

A staff worker of the on-going NPC and CPPCC sessions revealed in his blog some wasteful occurrences during the two big meetings, such as the use of large amount of disposable paper cups for drinking water in the lobby of the Great Hall of the People.

There are nearly 3000 NPC delegates, more than 2200 CPPCC members, as well as around 1000 journalists and staff workers going in and out the Great Hall, and many of those cups were used for only one serving, Guangzhou-based New Express newspaper reported.

The staff worker is not the only one who criticized the wasteful manner of the two meetings. [Full Text]

Read also: Government Spending for the Two Sessions on CDT.

Call for Cull of Officials to Curb Waste Censored

Delegates speak out in defence of rivers – Three Gorges Probe