Call for Cull of Officials to Curb Waste Censored 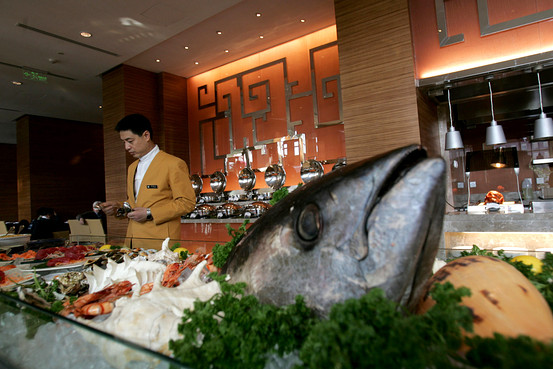 A growing list of new rules requires government officials to downshift their lifestyles by reducing public money spent on cigarettes, banquets, cars and travel, and fully eliminating perks like fireworks and private-jet travel. Tallying up edicts from the Communist Party’s internal corruption watchdog, more than a dozen broad categories of behavior, from entertainment to funerals, are being monitored for profligate spending.

[…] An unexpected peak-season rut for China’s calendar business illustrates how broadly a corruption crackdown has challenged business as usual. Private clubs are shutting down following official criticism they are extravagant; officials attend meetings without watches and belts to avoid suspicion they have ill-gotten wealth; military officers, once able to ride high in imported SUVs, were recently told to drive only domestically made vehicles.

[…] Calendar seller Mr. Li pointed to his stock and expressed frustration that he might only be able to salvage cardboard for recycling. But, he said he can’t completely disagree with the new policy: “In the long run, this is good because it’s a waste of money.” [Source]

Watchmakers have also been hit, after wearing or even not wearing luxurious timepieces brought the anti-corruption spotlight down onto some officials. There is some hope of recovery in that industry, but little such optimism among makers of high-end liquor, though a televised endorsement by Russian president Vladimir Putin has buoyed domestic firm Kweichow Moutai. (In other Moutai news, Sinocism’s Bill Bishop tweeted a photo of an unzeitgeistishly immodest bottle shaped like China’s Liaoning aircraft carrier, complete with golden jets on deck.)

Meanwhile, Hangzhou hotel magnate Chen Miaolin has claimed that he and others are trying to shed or avoid five-star ratings for dozens of hotels in order to dodge dining and accommodation restrictions. Also from James T. Areddy at The Wall Street Journal:

It’s an industry response to pain, Mr. Chen said in comments reported by China Business News and confirmed to The Wall Street Journal by one of his deputies.

Amid China’s anti-extravagance sweep, hotels are downgrading themselves to score political points – and win back business from politicians. A year ago this week, President and Communist Party Chairman Xi Jinping declared war on “undesirable practices” by officials that he said risked creating an “invisible wall that separates the party from the people.”

[…] Downgrading a hotel isn’t quite so straightforward, according to the government agency that hands out the stars, the China Tourist Hotel Association.

“There’s no such thing as ‘downgrading stars,’” said a woman in the rating department who declined to be named. She explained that if five-star properties choose to change their ratings, they will be considered unrated. [Source]

The Telegraph’s Malcolm Moore suggested that Chen’s story was concocted to show the campaign biting hard:

We think the story of Chinese 5-star hotels downgrading themselves to 4-stars is entirely untrue. Pre-CNY propaganda.

For all the frugality drive’s loudly proclaimed savings to date, it may be missing one major source of waste. A civil servant recently suggested slashing the number of local officials in half, though he also recommended increasing the survivors’ pay. His post went viral before censors deleted it, South China Morning Post’s Laura Zhou reports.

“The government will work properly or even much better if [we] cut half of the staff members and offices of the county government,” Li Changjin, who described himself as working as a civil servant for 34 years, said.

“Generally, the work for the government servants is too easy… and [you] can hardly find out someone who work at their full capacities for eight hours a day”, he wrote.

[…] Li called for a policy regulating the income of government servants, as the ban on bribes, which prohibits public servants from accepting gifts and prizes especially before the Chinese New Year, has affected the wages of the majority of lower-level government servants in the middle and western areas. [Source]