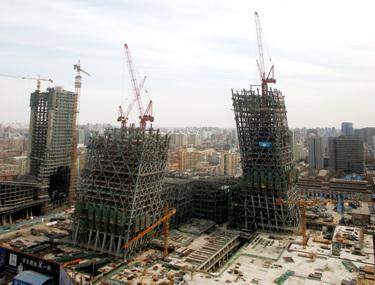 From China Rises: Notes from the Middle Kingdom:

No two ways about it. The new headquarters for the Chinese state TV channel going up near our apartment looks dangerous. It’s been called a “twisted doughnut.”

It’s a startling sight. Two angular upward towers with a gravity-defying cantilevered cross section. Imagine working in that mid-section 40 stories up with nothing below you but air. But I must admit: It’s stunning. I’d seen renderings of the building, like the one to the left. But it’s now beginning to take shape along the east third ring road. I watch with fascination as the supporting towers begin to rise, both at strong angles.

It’s the latest of several European-designed showcase buildings giving Beijing a radical new and distinctive look. There’s the long-delayed National Grand Theater, or as some call it “The Big Egg.” Set next to the Great Hall of the People, the oval theater looks like something out of a science fiction movie. And of course there is the “Bird’s Nest,” the huge national stadium going up on the Olympic Green, made from what appear to be giant steel twigs. You see it below left. There is also the “Water Cube” nearby, the shimmering aquatics center that looks like a tub of soap bubbles. [Full Text[

Sinica: The Soul of Beijing

In Beijing, a Brand-New Old Quarter (with photos)