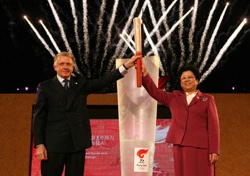 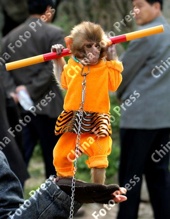 Is it just us or does the just-released design of the Olympic Torch look amazingly like….. Jingubang (ÈáëÁÆçÊ£í), the magic cudgel carried by the legendary Sun Wukong, Sage of Emptiness and Monkey King?Jodi Xu of our Beijing bureau thinks so. “When the unveiling ceremony was held on April 27 in Beijing,” she writes, “the host of the television show exclaimed “This looks exactly like Jin Gu Bang!” when he first saw the torch. The Monkey King is a universally loved figure who appears in the classic Chinese novel, Journey to the West. Jingubang, also known as the as-you-will cudgel, is the magical weapon that wielded by Monkey King when he escorted the Monk of Tang Dynasty, Xuan Zang, to retrive Buddhist sutras from India. It is an iron rod whose size changes according to the whim of the user. When it is not in use, the Monkey King shrank it to the size of a sewing needle and kept it behind his ear.” [Full Text]