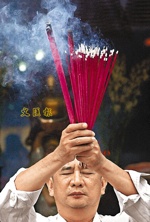 According to this article in Hong Kong’s Wenhui Daily, (via DWNEWS.com), a recent large-scale survey focusing on government officials at the county level (ÂéøÂ§ÑÁ∫ßÂÖ¨Âä°Âëò) revealed 54% of officials believe in superstition. The survey was done by a study group of National Administration College (ÂõΩÂÆ∂Ë°åÊîøÂ≠¶Èô¢),

The report is named„ÄäAnalytical Report of Basic Science Literacy of County Level Officials in China „Äã(‰∏≠ÂõΩÂéøÂ§ÑÁ∫ßÂÖ¨Âä°ÂëòÂü∫Êú¨ÁßëÂ≠¶Á¥†ÂÖªÂàÜÊûêÊä•Âëä). The study was conducted between September 2006 to December 2006. The survey forms were given to officials who attended training programs for county level officials in seventeen provinces and municipalities including Shanghai, Chongqing and Hebei. A total of 945 survey forms were given to these officials and and 900 forms were returned.

Among four choices of superstitious beliefs, 28.3% of officials said they believe in “Face Reading” or physiognomy, 18.5% believe in “Zhou Gong’s interpretation of dreams” , 13.7% believe in astrology, and 6 per cent the use of I Ching divination. The report also said that more than half of the officials constantly fear disasters “predicted” by those superstitious methods. [Full Text in Chinese]

See also this Shanghai Daily report. The South China Morning Post also had an article on this story:

“This is worrying. We didn’t expect the figure would be so high,” said Cheng Ping , a researcher in charge of the project. “As civil servants, most of them are members of the Communist Party. Party members are supposed to be atheist.”